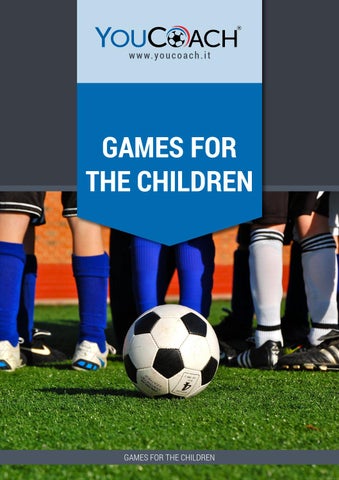 GAMES FOR THE CHILDREN

GAMES FOR THE CHILDREN

The formative path in the youth teams represents the basis over which to build the future football player; the incentives that the child receives during this phase will have an indelible impact on his personality, character and his technical-tactical qualities. The formative path for children goes from 5 to 12 years; it starts with the Under 6 age group and ends with the Under 12 age group. In this delicate and sensitive phase the coach’s duty is to accompany and support the child during the exploration course of the game in all its facets. In a safe and protected context the child will be able to discover and become familiar with the game rules and the coexistence rules; he will be able to know his own body, to get in contact with the ground and with the opponents, and he will learn to make mistakes in order to be aware of the improvement. In one word, he will learn “to play”. In this growing process the coach has to propose games and situations that respond to certain requirements: • From easy to difficult: The initial proposals must be very easy so that the child becomes confident with his gestures and movements to then gradually increase the difficulty; • From simple to complex: This principle refers to the game situations that initially have to be simple and recognizable in such a way that the child starts to choose the proper way in which to behave in different contexts. The complexity of the situation can be raised gradually by increasing the number of teammates and opponents; • From known to unknown: In a situational game context as football the skilled player is the one that gets to find an effective solution, either with technique or with tactics, to any problem that lies before him. The coach’s duty is to accomplish the greatest number of possible solutions and stimulate new ones. In the proposed exercises kids can experience the game and its rules with easy and stimulating proposals. In this context the coach can influence his players with individual or group incitements, transmitting his philosophy in an efficient manner.

Games for the children / 7

Research, study, comparison: This is the base of YouCoach, a web page created by coaches for coaches, with the objective of providing the best tools to train your team. YouCoah is the online guide for soccer coaches: The website offers over 1500 exercises, psychokinetic training sessions, simplified situations, simplified games, thematic matches, conditioned games, eBooks and insights created with the collaboration of expert and well-prepared coaches, who are open to the exchange of ideas and to continuous improvement. YouCoach.it offers the possibility of reading and sharing the articles from our collaborators (coaches, scouts, nutritionists, psychologists and fitness coaches) directly from the web and in any mobile device thanks to the simple, immediate contents, usable everywhere and at any time. The presence of YouCoach on social networks allows you to comment and share all the articles. You can find YouCoach on Facebook, Twitter, Google+, YouTube and Linkedin. A soccer coach not always has the tools and the time to plan and analyze the season in the best way: For this reason the YouCoach team has created MyCoach, the web app that allows you to create, save and supervise each training session during the whole season, taking advantage of a large database of exercises divided by categories and objectives and ordered by the level of difficulty. Subscribe now to YouCoach and plan your workout agenda with MyCoach! You read, You share, YouCoach!

8 / Games for the children

Games for the children / 9

Ball driving Avoid Run Reaction Inside of the foot Instep

Create a square of 15×15 meters. Make two diagonal lines with three cones inside the square, as shown in the picture. Create a square of 2×2 meters on the opposite side to where the lines begin. Place some balls randomly inside the small square. The coach goes outside the small square. Divide the team into two groups of four players and give a number from 1 to 4 to each teamplayer. Players go to the opposite side of the square, in line and ordered by number.

12 / Games for the children

To the coach’s signal, which will be calling out a number, the player with the corresponding number (one per team) starts the exercise trying to conquer the ball and faces the line of cones with a slalom with the objective of being the first one to go beyond the starting line.

1. The coach can add a goal on the finish line in which players have to score when they go out of the slalom 2. Players have to slalom before getting to the ball in order to boost dodge motive scheme

• In case of large groups create two playing areas to avoid long waiting times • Ease the success of the exercise to reward kids by letting them use their strongest foot when driving the ball • Keep the ball close to the foot • Try to execute safe impacts with the ball • Be on top of the ball by keeping the bust slightly bent forwards • The player must keep his head up trying to decrease eye contact with the ball • Touch the ball with the outside of the foot, using the inside only for changes in direction • Control the situation by developing peripheral vision Games for the children / 13

Ball driving Reaction Kick Inside of the foot Instep

Create a 20×15 meters rectangle. Place two space markers on the long side at about 4 meters from the goal line of the short side, creating an area in which in the center of the short side line two cones are placed to make a goal of about 4 meters. Divide the team into two groups of four players. The players with vests go to the opposite side of the goal, while players without vest go outside of the long side, two per side. Give a ball to all players.

14 / Games for the children

• Each goal is worth one point • If forwards are hit on the feet or the ball, they will have to go back and start all over again • The winning team will be the one that scores the most points

1. The coach can add a goal on the finish line in which players have to score after the slalom 2. The coach can choose to send the forwards to the beginning if their ball is hit 3. Players that have to hit teammates can throw the ball with their hands

Games for the children / 15 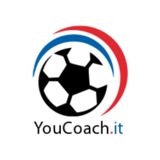