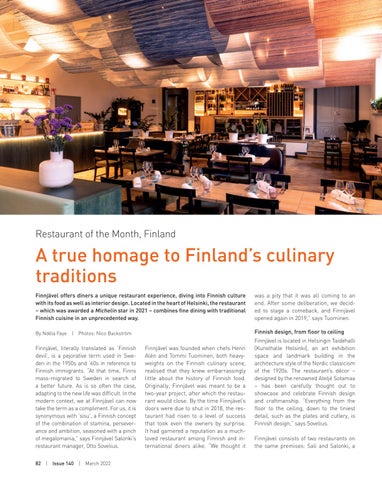 Restaurant of the Month, Finland

A true homage to Finland’s culinary traditions Finnjävel offers diners a unique restaurant experience, diving into Finnish culture with its food as well as interior design. Located in the heart of Helsinki, the restaurant – which was awarded a Michelin star in 2021 – combines fine dining with traditional Finnish cuisine in an unprecedented way.

was a pity that it was all coming to an end. After some deliberation, we decided to stage a comeback, and Finnjävel opened again in 2019,” says Tuominen.

Finnish design, from floor to ceiling

Finnjävel, literally translated as ‘Finnish devil’, is a pejorative term used in Sweden in the 1950s and ‘60s in reference to Finnish immigrants. “At that time, Finns mass-migrated to Sweden in search of a better future. As is so often the case, adapting to the new life was difficult. In the modern context, we at Finnjävel can now take the term as a compliment. For us, it is synonymous with ‘sisu’, a Finnish concept of the combination of stamina, perseverance and ambition, seasoned with a pinch of megalomania,” says Finnjävel Salonki’s restaurant manager, Otto Sovelius. 82 |

Finnjävel was founded when chefs Henri Alén and Tommi Tuominen, both heavyweights on the Finnish culinary scene, realised that they knew embarrassingly little about the history of Finnish food. Originally, Finnjävel was meant to be a two-year project, after which the restaurant would close. By the time Finnjävel’s doors were due to shut in 2018, the restaurant had risen to a level of success that took even the owners by surprise. It had garnered a reputation as a muchloved restaurant among Finnish and international diners alike. “We thought it

Finnjävel is located in Helsingin Taidehalli (Kunsthalle Helsinki), an art exhibition space and landmark building in the architecture style of the Nordic classicism of the 1920s. The restaurant’s décor – designed by the renowned Ateljé Sotamaa – has been carefully thought out to showcase and celebrate Finnish design and craftmanship. “Everything from the floor to the ceiling, down to the tiniest detail, such as the plates and cutlery, is Finnish design,” says Sovelius. Finnjävel consists of two restaurants on the same premises: Sali and Salonki, a