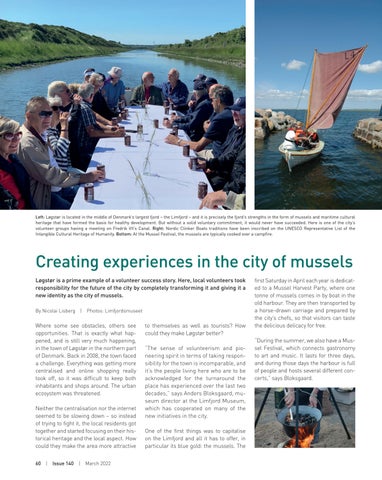 Left: Løgstør is located in the middle of Denmark’s largest fjord – the Limfjord – and it is precisely the fjord’s strengths in the form of mussels and maritime cultural heritage that have formed the basis for healthy development. But without a solid voluntary commitment, it would never have succeeded. Here is one of the city’s volunteer groups having a meeting on Fredrik VII’s Canal. Right: Nordic Clinker Boats traditions have been inscribed on the UNESCO Representative List of the Intangible Cultural Heritage of Humanity. Bottom: At the Mussel Festival, the mussels are typically cooked over a campfire.

Creating experiences in the city of mussels Løgstør is a prime example of a volunteer success story. Here, local volunteers took responsibility for the future of the city by completely transforming it and giving it a new identity as the city of mussels. By Nicolai Lisberg

Where some see obstacles, others see opportunities. That is exactly what happened, and is still very much happening, in the town of Løgstør in the northern part of Denmark. Back in 2008, the town faced a challenge. Everything was getting more centralised and online shopping really took off, so it was difficult to keep both inhabitants and shops around. The urban ecosystem was threatened. Neither the centralisation nor the internet seemed to be slowing down – so instead of trying to fight it, the local residents got together and started focusing on their historical heritage and the local aspect. How could they make the area more attractive 60 |

to themselves as well as tourists? How could they make Løgstør better? “The sense of volunteerism and pioneering spirit in terms of taking responsibility for the town is incomparable, and it’s the people living here who are to be acknowledged for the turnaround the place has experienced over the last two decades,” says Anders Bloksgaard, museum director at the Limfjord Museum, which has cooperated on many of the new initiatives in the city. One of the first things was to capitalise on the Limfjord and all it has to offer, in particular its blue gold: the mussels. The

first Saturday in April each year is dedicated to a Mussel Harvest Party, where one tonne of mussels comes in by boat in the old harbour. They are then transported by a horse-drawn carriage and prepared by the city’s chefs, so that visitors can taste the delicious delicacy for free. “During the summer, we also have a Mussel Festival, which connects gastronomy to art and music. It lasts for three days, and during those days the harbour is full of people and hosts several different concerts,” says Bloksgaard.