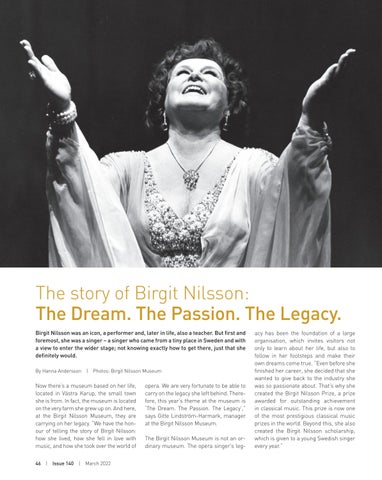 The story of Birgit Nilsson: The Dream. The Passion. The Legacy. Birgit Nilsson was an icon, a performer and, later in life, also a teacher. But first and foremost, she was a singer – a singer who came from a tiny place in Sweden and with a view to enter the wider stage; not knowing exactly how to get there, just that she definitely would. By Hanna Andersson

Now there’s a museum based on her life, located in Västra Karup, the small town she is from. In fact, the museum is located on the very farm she grew up on. And here, at the Birgit Nilsson Museum, they are carrying on her legacy. “We have the honour of telling the story of Birgit Nilsson: how she lived, how she fell in love with music, and how she took over the world of 46 |

acy has been the foundation of a large organisation, which invites visitors not only to learn about her life, but also to follow in her footsteps and make their own dreams come true. “Even before she finished her career, she decided that she wanted to give back to the industry she was so passionate about. That’s why she created the Birgit Nilsson Prize, a prize awarded for outstanding achievement in classical music. This prize is now one of the most prestigious classical music prizes in the world. Beyond this, she also created the Birgit Nilsson scholarship, which is given to a young Swedish singer every year.”