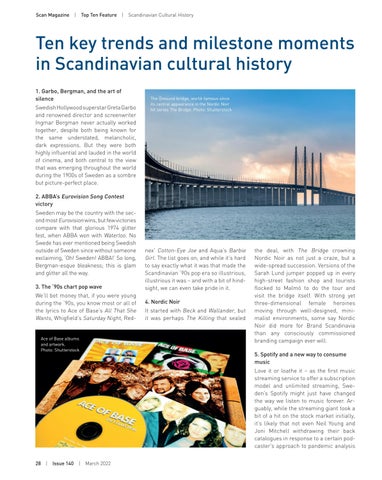 Ten key trends and milestone moments in Scandinavian cultural history 1. Garbo, Bergman, and the art of silence Swedish Hollywood superstar Greta Garbo and renowned director and screenwriter Ingmar Bergman never actually worked together, despite both being known for the same understated, melancholic, dark expressions. But they were both highly influential and lauded in the world of cinema, and both central to the view that was emerging throughout the world during the 1900s of Sweden as a sombre but picture-perfect place.

The Öresund bridge, world-famous since its central appearance in the Nordic Noir hit series The Bridge. Photo: Shutterstock

2. ABBA’s Eurovision Song Contest victory Sweden may be the country with the second most Eurovision wins, but few victories compare with that glorious 1974 glitter fest, when ABBA won with Waterloo. No Swede has ever mentioned being Swedish outside of Sweden since without someone exclaiming, ‘Oh! Sweden! ABBA!’ So long, Bergman-esque bleakness; this is glam and glitter all the way. 3. The ‘90s chart pop wave We’ll bet money that, if you were young during the ‘90s, you know most or all of the lyrics to Ace of Base’s All That She Wants, Whigfield’s Saturday Night, Red-

Ace of Base albums and artwork. Photo: Shutterstock

nex’ Cotton-Eye Joe and Aqua’s Barbie Girl. The list goes on, and while it’s hard to say exactly what it was that made the Scandinavian ‘90s pop era so illustrious, illustrious it was – and with a bit of hindsight, we can even take pride in it. 4. Nordic Noir It started with Beck and Wallander, but it was perhaps The Killing that sealed

the deal, with The Bridge crowning Nordic Noir as not just a craze, but a wide-spread succession. Versions of the Sarah Lund jumper popped up in every high-street fashion shop and tourists flocked to Malmö to do the tour and visit the bridge itself. With strong yet three-dimensional female heroines moving through well-designed, minimalist environments, some say Nordic Noir did more for Brand Scandinavia than any consciously commissioned branding campaign ever will. 5. Spotify and a new way to consume music Love it or loathe it – as the first music streaming service to offer a subscription model and unlimited streaming, Sweden’s Spotify might just have changed the way we listen to music forever. Arguably, while the streaming giant took a bit of a hit on the stock market initially, it’s likely that not even Neil Young and Joni Mitchell withdrawing their back catalogues in response to a certain podcaster’s approach to pandemic analysis