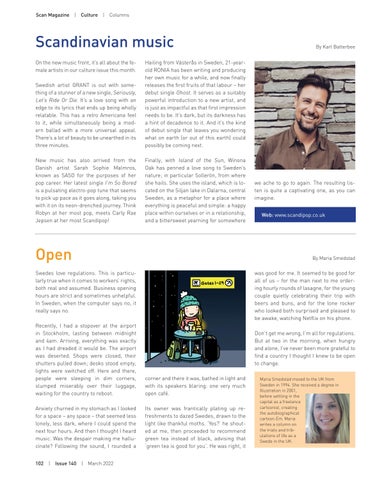 Scandinavian music On the new music front, it’s all about the female artists in our culture issue this month. Swedish artist GRANT is out with something of a stunner of a new single, Seriously, Let’s Ride Or Die. It’s a love song with an edge to its lyrics that ends up being wholly relatable. This has a retro Americana feel to it, while simultaneously being a modern ballad with a more universal appeal. There’s a lot of beauty to be unearthed in its three minutes.

Hailing from Västerås in Sweden, 21-yearold RONIA has been writing and producing her own music for a while, and now finally releases the first fruits of that labour – her debut single Ghost. It serves as a suitably powerful introduction to a new artist, and is just as impactful as that first impression needs to be. It’s dark, but its darkness has a hint of decadence to it. And it’s the kind of debut single that leaves you wondering what on earth (or out of this earth) could possibly be coming next.

New music has also arrived from the Danish artist Sarah Sophie Malmros, known as SASO for the purposes of her pop career. Her latest single I’m So Bored is a pulsating electro-pop tune that seems to pick up pace as it goes along, taking you with it on its neon-drenched journey. Think Robyn at her most pop, meets Carly Rae Jepsen at her most Scandipop!

Finally, with Island of the Sun, Winona Oak has penned a love song to Sweden’s nature; in particular Sollerön, from where she hails. She uses the island, which is located on the Siljan lake in Dalarna, central Sweden, as a metaphor for a place where everything is peaceful and simple: a happy place within ourselves or in a relationship, and a bittersweet yearning for somewhere

corner and there it was, bathed in light and with its speakers blaring: one very much open café.

Anxiety churned in my stomach as I looked for a space – any space – that seemed less lonely, less dark, where I could spend the next four hours. And then I thought I heard music. Was the despair making me hallucinate? Following the sound, I rounded a

Its owner was frantically plating up refreshments to dazed Swedes, drawn to the light like thankful moths. ‘Yes?’ he shouted at me, then proceeded to recommend green tea instead of black, advising that ‘green tea is good for you’. He was right, it

was good for me. It seemed to be good for all of us – for the man next to me ordering hourly rounds of lasagne, for the young couple quietly celebrating their trip with beers and buns, and for the lone rocker who looked both surprised and pleased to be awake, watching Netflix on his phone.

Recently, I had a stopover at the airport in Stockholm, lasting between midnight and 4am. Arriving, everything was exactly as I had dreaded it would be. The airport was deserted. Shops were closed, their shutters pulled down; desks stood empty, lights were switched off. Here and there, people were sleeping in dim corners, slumped miserably over their luggage, waiting for the country to reboot.

we ache to go to again. The resulting listen is quite a captivating one, as you can imagine.

Swedes love regulations. This is particularly true when it comes to workers’ rights, both real and assumed. Business opening hours are strict and sometimes unhelpful. In Sweden, when the computer says no, it really says no.

Don’t get me wrong, I’m all for regulations. But at two in the morning, when hungry and alone, I’ve never been more grateful to find a country I thought I knew to be open to change. Maria Smedstad moved to the UK from Sweden in 1994. She received a degree in Illustration in 2001, before settling in the capital as a freelance cartoonist, creating the autobiographical cartoon Em. Maria writes a column on the trials and tribulations of life as a Swede in the UK.