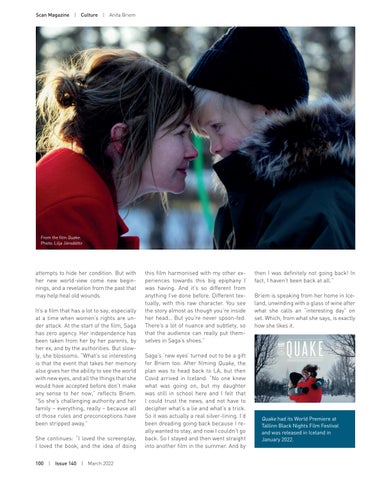 attempts to hide her condition. But with her new world-view come new beginnings, and a revelation from the past that may help heal old wounds. It’s a film that has a lot to say, especially at a time when women’s rights are under attack. At the start of the film, Saga has zero agency. Her independence has been taken from her by her parents, by her ex, and by the authorities. But slowly, she blossoms. “What’s so interesting is that the event that takes her memory also gives her the ability to see the world with new eyes, and all the things that she would have accepted before don’t make any sense to her now,” reflects Briem. “So she’s challenging authority and her family – everything, really – because all of those rules and preconceptions have been stripped away.” She continues: “I loved the screenplay, I loved the book, and the idea of doing 100

this film harmonised with my other experiences towards this big epiphany I was having. And it’s so different from anything I’ve done before. Different textually, with this raw character. You see the story almost as though you’re inside her head… But you’re never spoon-fed. There’s a lot of nuance and subtlety, so that the audience can really put themselves in Saga’s shoes.” Saga’s ‘new eyes’ turned out to be a gift for Briem too. After filming Quake, the plan was to head back to LA, but then Covid arrived in Iceland. “No one knew what was going on, but my daughter was still in school here and I felt that I could trust the news, and not have to decipher what’s a lie and what’s a trick. So it was actually a real silver-lining. I’d been dreading going back because I really wanted to stay, and now I couldn’t go back. So I stayed and then went straight into another film in the summer. And by

then I was definitely not going back! In fact, I haven’t been back at all.” Briem is speaking from her home in Iceland, unwinding with a glass of wine after what she calls an “interesting day” on set. Which, from what she says, is exactly how she likes it.

Quake had its World Premiere at Tallinn Black Nights Film Festival and was released in Iceland in January 2022.