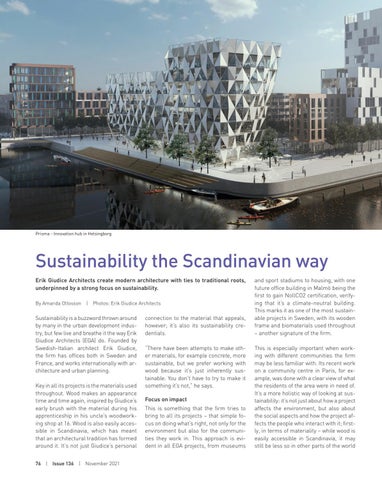 Sustainability is a buzzword thrown around by many in the urban development industry, but few live and breathe it the way Erik Giudice Architects (EGA) do. Founded by Swedish-Italian architect Erik Giudice, the firm has offices both in Sweden and France, and works internationally with architecture and urban planning. Key in all its projects is the materials used throughout. Wood makes an appearance time and time again, inspired by Giudice’s early brush with the material during his apprenticeship in his uncle’s woodworking shop at 16. Wood is also easily accessible in Scandinavia, which has meant that an architectural tradition has formed around it. It’s not just Giudice’s personal 76  |  Issue 136  |  November 2021

connection to the material that appeals, however; it’s also its sustainability credentials. “There have been attempts to make other materials, for example concrete, more sustainable, but we prefer working with wood because it’s just inherently sustainable. You don’t have to try to make it something it’s not,” he says. Focus on impact This is something that the firm tries to bring to all its projects – that simple focus on doing what’s right, not only for the environment but also for the communities they work in. This approach is evident in all EGA projects, from museums

and sport stadiums to housing, with one future office building in Malmö being the first to gain NollCO2 certification, verifying that it’s a climate-neutral building. This marks it as one of the most sustainable projects in Sweden, with its wooden frame and biomaterials used throughout – another signature of the firm. This is especially important when working with different communities the firm may be less familiar with. Its recent work on a community centre in Paris, for example, was done with a clear view of what the residents of the area were in need of. It’s a more holistic way of looking at sustainability: it’s not just about how a project affects the environment, but also about the social aspects and how the project affects the people who interact with it; firstly, in terms of materiality – while wood is easily accessible in Scandinavia, it may still be less so in other parts of the world