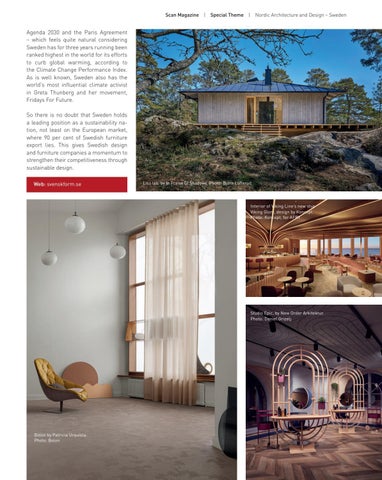 Agenda 2030 and the Paris Agreement – which feels quite natural considering Sweden has for three years running been ranked highest in the world for its efforts to curb global warming, according to the Climate Change Performance Index. As is well known, Sweden also has the world’s most influential climate activist in Greta Thunberg and her movement, Fridays For Future. So there is no doubt that Sweden holds a leading position as a sustainability nation, not least on the European market, where 90 per cent of Swedish furniture export lies. This gives Swedish design and furniture companies a momentum to strengthen their competitiveness through sustainable design. Web: svenskform.se

Liso lab, by In Praise Of Shadows. Photo: Björn Lofterud