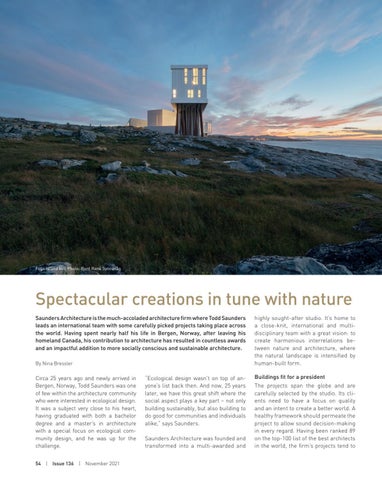 Spectacular creations in tune with nature Saunders Architecture is the much-accoladed architecture firm where Todd Saunders leads an international team with some carefully picked projects taking place across the world. Having spent nearly half his life in Bergen, Norway, after leaving his homeland Canada, his contribution to architecture has resulted in countless awards and an impactful addition to more socially conscious and sustainable architecture. By Nina Bressler

Circa 25 years ago and newly arrived in Bergen, Norway, Todd Saunders was one of few within the architecture community who were interested in ecological design. It was a subject very close to his heart, having graduated with both a bachelor degree and a master’s in architecture with a special focus on ecological community design, and he was up for the challenge. 54  |  Issue 136  |  November 2021

“Ecological design wasn’t on top of anyone’s list back then. And now, 25 years later, we have this great shift where the social aspect plays a key part – not only building sustainably, but also building to do good for communities and individuals alike,” says Saunders. Saunders Architecture was founded and transformed into a multi-awarded and

highly sought-after studio. It’s home to a close-knit, international and multidisciplinary team with a great vision: to create harmonious interrelations between nature and architecture, where the natural landscape is intensified by human-built form. Buildings fit for a president The projects span the globe and are carefully selected by the studio. Its clients need to have a focus on quality and an intent to create a better world. A healthy framework should permeate the project to allow sound decision-making in every regard. Having been ranked 89 on the top-100 list of the best architects in the world, the firm’s projects tend to