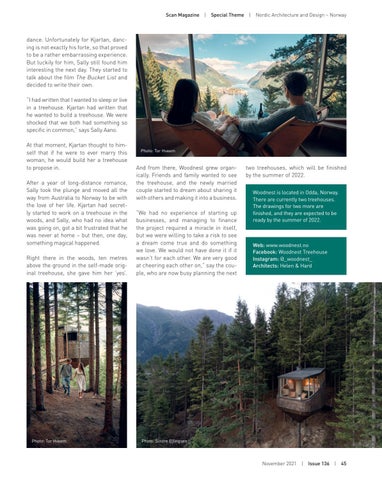 dance. Unfortunately for Kjartan, dancing is not exactly his forte, so that proved to be a rather embarrassing experience. But luckily for him, Sally still found him interesting the next day. They started to talk about the film The Bucket List and decided to write their own. “I had written that I wanted to sleep or live in a treehouse. Kjartan had written that he wanted to build a treehouse. We were shocked that we both had something so specific in common,” says Sally Aano. At that moment, Kjartan thought to himself that if he were to ever marry this woman, he would build her a treehouse to propose in. After a year of long-distance romance, Sally took the plunge and moved all the way from Australia to Norway to be with the love of her life. Kjartan had secretly started to work on a treehouse in the woods, and Sally, who had no idea what was going on, got a bit frustrated that he was never at home – but then, one day, something magical happened. Right there in the woods, ten metres above the ground in the self-made original treehouse, she gave him her ’yes’.

And from there, Woodnest grew organically. Friends and family wanted to see the treehouse, and the newly married couple started to dream about sharing it with others and making it into a business. “We had no experience of starting up businesses, and managing to finance the project required a miracle in itself, but we were willing to take a risk to see a dream come true and do something we love. We would not have done it if it wasn’t for each other. We are very good at cheering each other on,” say the couple, who are now busy planning the next