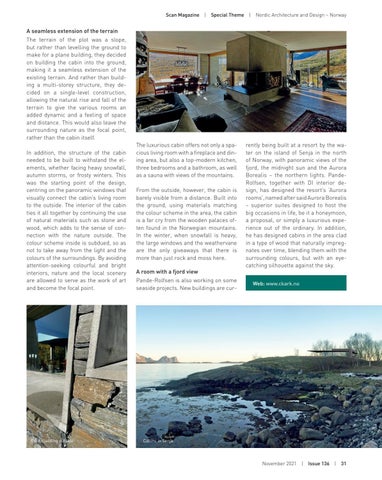 A seamless extension of the terrain The terrain of the plot was a slope, but rather than levelling the ground to make for a plane building, they decided on building the cabin into the ground, making it a seamless extension of the existing terrain. And rather than building a multi-storey structure, they decided on a single-level construction, allowing the natural rise and fall of the terrain to give the various rooms an added dynamic and a feeling of space and distance. This would also leave the surrounding nature as the focal point, rather than the cabin itself. In addition, the structure of the cabin needed to be built to withstand the elements, whether facing heavy snowfall, autumn storms, or frosty winters. This was the starting point of the design, centring on the panoramic windows that visually connect the cabin’s living room to the outside. The interior of the cabin ties it all together by continuing the use of natural materials such as stone and wood, which adds to the sense of connection with the nature outside. The colour scheme inside is subdued, so as not to take away from the light and the colours of the surroundings. By avoiding attention-seeking colourful and bright interiors, nature and the local scenery are allowed to serve as the work of art and become the focal point.

The luxurious cabin offers not only a spacious living room with a fireplace and dining area, but also a top-modern kitchen, three bedrooms and a bathroom, as well as a sauna with views of the mountains. From the outside, however, the cabin is barely visible from a distance. Built into the ground, using materials matching the colour scheme in the area, the cabin is a far cry from the wooden palaces often found in the Norwegian mountains. In the winter, when snowfall is heavy, the large windows and the weathervane are the only giveaways that there is more than just rock and moss here. A room with a fjord view Pande-Rolfsen is also working on some seaside projects. New buildings are cur-

rently being built at a resort by the water on the island of Senja in the north of Norway, with panoramic views of the fjord, the midnight sun and the Aurora Borealis – the northern lights. PandeRolfsen, together with DI interior design, has designed the resort’s ‘Aurora rooms’, named after said Aurora Borealis – superior suites designed to host the big occasions in life, be it a honeymoon, a proposal, or simply a luxurious experience out of the ordinary. In addition, he has designed cabins in the area clad in a type of wood that naturally impregnates over time, blending them with the surrounding colours, but with an eyecatching silhouette against the sky. Web: www.ckark.no