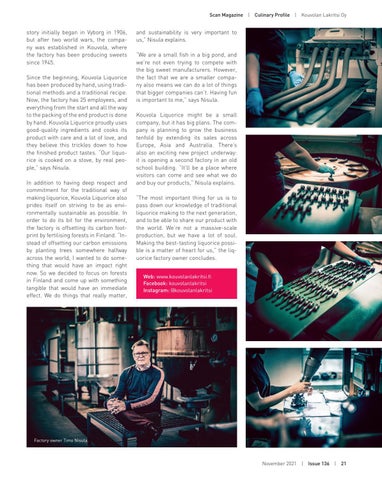 story initially began in Vyborg in 1906, but after two world wars, the company was established in Kouvola, where the factory has been producing sweets since 1945. Since the beginning, Kouvola Liquorice has been produced by hand, using traditional methods and a traditional recipe. Now, the factory has 25 employees, and everything from the start and all the way to the packing of the end product is done by hand. Kouvola Liquorice proudly uses good-quality ingredients and cooks its product with care and a lot of love, and they believe this trickles down to how the finished product tastes. “Our liquorice is cooked on a stove, by real people,” says Nisula. In addition to having deep respect and commitment for the traditional way of making liquorice, Kouvola Liquorice also prides itself on striving to be as environmentally sustainable as possible. In order to do its bit for the environment, the factory is offsetting its carbon footprint by fertilising forests in Finland. “Instead of offsetting our carbon emissions by planting trees somewhere halfway across the world, I wanted to do something that would have an impact right now. So we decided to focus on forests in Finland and come up with something tangible that would have an immediate effect. We do things that really matter,

and sustainability is very important to us,” Nisula explains. “We are a small fish in a big pond, and we’re not even trying to compete with the big sweet manufacturers. However, the fact that we are a smaller company also means we can do a lot of things that bigger companies can’t. Having fun is important to me,” says Nisula. Kouvola Liquorice might be a small company, but it has big plans. The company is planning to grow the business tenfold by extending its sales across Europe, Asia and Australia. There’s also an exciting new project underway: it is opening a second factory in an old school building. “It’ll be a place where visitors can come and see what we do and buy our products,” Nisula explains. “The most important thing for us is to pass down our knowledge of traditional liquorice making to the next generation, and to be able to share our product with the world. We’re not a massive-scale production, but we have a lot of soul. Making the best-tasting liquorice possible is a matter of heart for us,” the liquorice factory owner concludes. Web: www.kouvolanlakritsi.fi Facebook: kouvolanlakritsi Instagram: @kouvolanlakritsi