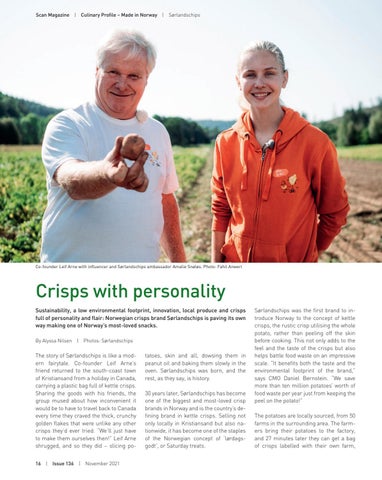 The story of Sørlandschips is like a modern fairytale. Co-founder Leif Arne’s friend returned to the south-coast town of Kristiansand from a holiday in Canada, carrying a plastic bag full of kettle crisps. Sharing the goods with his friends, the group mused about how inconvenient it would be to have to travel back to Canada every time they craved the thick, crunchy golden flakes that were unlike any other crisps they’d ever tried. “We’ll just have to make them ourselves then!” Leif Arne shrugged, and so they did – slicing po16  |  Issue 136  |  November 2021

tatoes, skin and all, dowsing them in peanut oil and baking them slowly in the oven. Sørlandschips was born, and the rest, as they say, is history. 30 years later, Sørlandschips has become one of the biggest and most-loved crisp brands in Norway and is the country’s defining brand in kettle crisps. Selling not only locally in Kristiansand but also nationwide, it has become one of the staples of the Norwegian concept of ‘lørdagsgodt’, or Saturday treats.

Sørlandschips was the first brand to introduce Norway to the concept of kettle crisps, the rustic crisp utilising the whole potato, rather than peeling off the skin before cooking. This not only adds to the feel and the taste of the crisps but also helps battle food waste on an impressive scale. “It benefits both the taste and the environmental footprint of the brand,” says CMO Daniel Bernstein. “We save more than ten million potatoes’ worth of food waste per year just from keeping the peel on the potato!” The potatoes are locally sourced, from 50 farms in the surrounding area. The farmers bring their potatoes to the factory, and 27 minutes later they can get a bag of crisps labelled with their own farm,