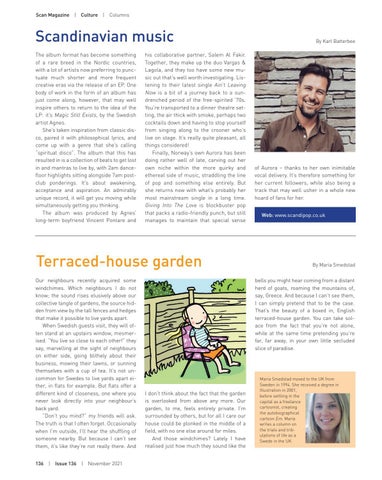 Scandinavian music The album format has become something of a rare breed in the Nordic countries, with a lot of artists now preferring to punctuate much shorter and more frequent creative eras via the release of an EP. One body of work in the form of an album has just come along, however, that may well inspire others to return to the idea of the LP: it’s Magic Still Exists, by the Swedish artist Agnes. She’s taken inspiration from classic disco, paired it with philosophical lyrics, and come up with a genre that she’s calling “spiritual disco”. The album that this has resulted in is a collection of beats to get lost in and mantras to live by, with 2am dancefloor highlights sitting alongside 7am postclub ponderings. It’s about awakening, acceptance and aspiration. An admirably unique record, it will get you moving while simultaneously getting you thinking. The album was produced by Agnes’ long-term boyfriend Vincent Pontare and

his collaborative partner, Salem Al Fakir. Together, they make up the duo Vargas &amp; Lagola, and they too have some new music out that’s well worth investigating. Listening to their latest single Ain’t Leaving Now is a bit of a journey back to a sundrenched period of the free-spirited ‘70s. You’re transported to a dinner theatre setting, the air thick with smoke, perhaps two cocktails down and having to stop yourself from singing along to the crooner who’s live on stage. It’s really quite pleasant, all things considered! Finally, Norway’s own Aurora has been doing rather well of late, carving out her own niche within the more quirky and ethereal side of music, straddling the line of pop and something else entirely. But she returns now with what’s probably her most mainstream single in a long time. Giving Into The Love is blockbuster pop that packs a radio-friendly punch, but still manages to maintain that special sense

Terraced-house garden Our neighbours recently acquired some windchimes. Which neighbours I do not know; the sound rises elusively above our collective tangle of gardens, the source hidden from view by the tall fences and hedges that make it possible to live yards apart. When Swedish guests visit, they will often stand at an upstairs window, mesmerised. “You live so close to each other!” they say, marvelling at the sight of neighbours on either side, going blithely about their business, mowing their lawns, or sunning themselves with a cup of tea. It’s not uncommon for Swedes to live yards apart either, in flats for example. But flats offer a different kind of closeness, one where you never look directly into your neighbour’s back yard. “Don’t you mind?” my friends will ask. The truth is that I often forget. Occasionally when I’m outside, I’ll hear the shuffling of someone nearby. But because I can’t see them, it’s like they’re not really there. And 136  |  Issue 136  |  November 2021

of Aurora – thanks to her own inimitable vocal delivery. It’s therefore something for her current followers, while also being a track that may well usher in a whole new hoard of fans for her. Web: www.scandipop.co.uk

bells you might hear coming from a distant herd of goats, roaming the mountains of, say, Greece. And because I can’t see them, I can simply pretend that to be the case. That’s the beauty of a boxed in, English terraced-house garden. You can take solace from the fact that you’re not alone, while at the same time pretending you’re far, far away, in your own little secluded slice of paradise.

I don’t think about the fact that the garden is overlooked from above any more. Our garden, to me, feels entirely private. I’m surrounded by others, but for all I care our house could be plonked in the middle of a field, with no one else around for miles. And those windchimes? Lately I have realised just how much they sound like the