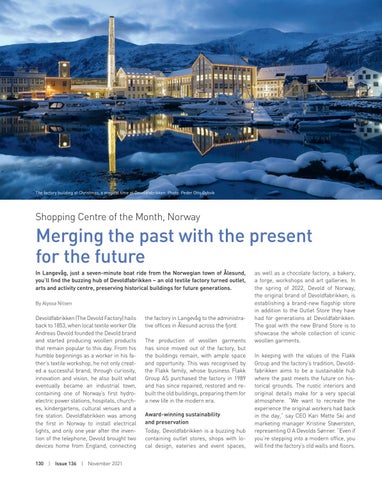 Shopping Centre of the Month, Norway

Merging the past with the present for the future In Langevåg, just a seven-minute boat ride from the Norwegian town of Ålesund, you’ll find the buzzing hub of Devoldfabrikken – an old textile factory turned outlet, arts and activity centre, preserving historical buildings for future generations. By Alyssa Nilsen

Devoldfabrikken (The Devold Factory) hails back to 1853, when local textile worker Ole Andreas Devold founded the Devold brand and started producing woollen products that remain popular to this day. From his humble beginnings as a worker in his father’s textile workshop, he not only created a successful brand; through curiosity, innovation and vision, he also built what eventually became an industrial town, containing one of Norway’s first hydroelectric power stations, hospitals, churches, kindergartens, cultural venues and a fire station. Devoldfabrikken was among the first in Norway to install electrical lights, and only one year after the invention of the telephone, Devold brought two devices home from England, connecting 130  |  Issue 136  |  November 2021

the factory in Langevåg to the administrative offices in Ålesund across the fjord. The production of woollen garments has since moved out of the factory, but the buildings remain, with ample space and opportunity. This was recognised by the Flakk family, whose business Flakk Group AS purchased the factory in 1989 and has since repaired, restored and rebuilt the old buildings, preparing them for a new life in the modern era. Award-winning sustainability and preservation Today, Devoldfabrikken is a buzzing hub containing outlet stores, shops with local design, eateries and event spaces,

as well as a chocolate factory, a bakery, a forge, workshops and art galleries. In the spring of 2022, Devold of Norway, the original brand of Devoldfabrikken, is establishing a brand-new flagship store in addition to the Outlet Store they have had for generations at Devoldfabrikken. The goal with the new Brand Store is to showcase the whole collection of iconic woollen garments. In keeping with the values of the Flakk Group and the factory’s tradition, Devoldfabrikken aims to be a sustainable hub where the past meets the future on historical grounds. The rustic interiors and original details make for a very special atmosphere. “We want to recreate the experience the original workers had back in the day,” say CEO Kari Mette Ski and marketing manager Kristine Støversten, representing O A Devolds Sønner. “Even if you’re stepping into a modern office, you will find the factory’s old walls and floors.