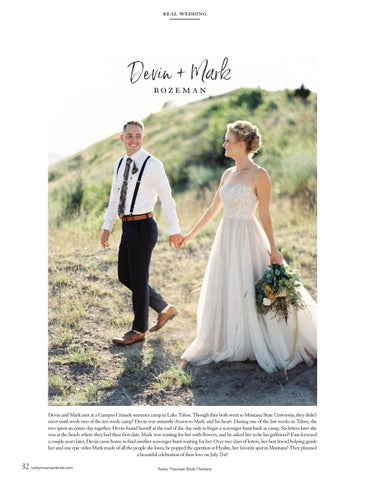 Devin and Mark met at a Campus Crusade summer camp in Lake Tahoe. Though they both went to Montana State University, they didnâ&#x20AC;&#x2122;t meet until week two of the ten week camp! Devin was instantly drawn to Mark and his heart. During one of the last weeks in Tahoe, the two spent an entire day together. Devin found herself at the end of the day only to begin a scavenger hunt back at camp. Six letters later she was at the beach where they had their first date. Mark was waiting for her with flowers, and he asked her to be his girlfriend! Fast-forward a couple years later, Devin came home to find another scavenger hunt waiting for her. Over two days of letters, her best friend helping guide her and one epic video Mark made of all the people she loves, he popped the question at Hyalite, her favorite spot in Montana! They planned a beautiful celebration of their love on July 21st!

The Bride's Planning Guide for an amazing Montana wedding in the Rockies!

The Bride's Planning Guide for an amazing Montana wedding in the Rockies!