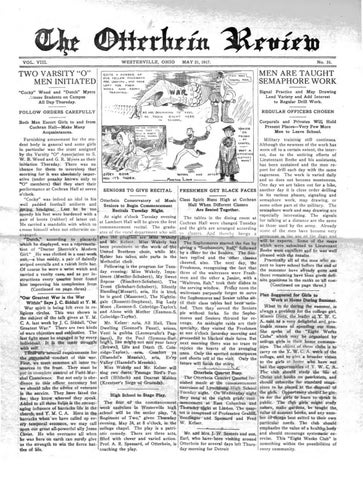 Furnishing amu ement for the stu­ dent body in general ·and some girls in particular was the stunt assigned by the Varsity "O" Association to S. W. B. Wood and G. R. Myers as their initiation Thursday. There was no chance for them to oversleep that morning for it wa ab olutely imper­ ative (under penalty known only to "O" members) that they start their performance at Cochran Hall at seven o'clock. "Cocky" was indeed an idol in his well padded football uniform and sprjng headgear. Lest he be too speedy his feet were burdened with a pair of boots (rubber) of late t cut. He carried a mandolin with which to :.muse himself when not otherwise enaged. 11

"Dutch," according to placards which he di played, was a r presenta­ tion of "Doctor herrick's Modern Girl." . He wa clothed in a neat work suit,-a blue middy, a pair of daintily striped overalls and a rakish little bat. Of cours he wore a wrist watch and carried a vanity case, and as per instructions every quarter hour found him improving his complexion froµ 1 .. (Continued on page. three) "Our Greatest War is the War Within" Says J.C. Siddall at Y. M. War pirit is being felt even in re­ ligious circly . This was bown in the subject of the talk given at Y. M. C. A. la t we k by J. C. Siddall, "Our Greatest War." There are two kind of war objective and subjective. The last fight mu t be engaged in by every individual. It is the inner struggJe with self. There are severa1 req_uirement for the succe sful conduct of thi war. First, we mu t ummon all inner re­ sources to the front. They mu t be put in complete control of Field-Mar­ shal on cience. But not only is obe­ dience to this officer neces ary but we hould take the advice of veterau in the service. They have faced the foe; they know whereof they peak. Added to all the e help is the encour­ aging influence of barrack life in the church, and Y. M. C. A. Here in tbe barrack when we have called up ev­ ery temporal re ource, we may call upon our great all-powerful ally Je us Chri t. He who overcame all when he was here OJ1 earth can urely give us the treogth to win the fierce bat­ tles of life.

Both Men Escort Girls to and from Cochran Hall-Make Many Acquaintances.

The inner side of every cloud Is ever bright and shmmg; I therefore wear them inside out And always wear them inside out To how the silver lining." The Philalethean Number. "The best issue of the whole year," is what everyone· is saying . of the Philalethean n1.1mber of the Review. From the first page to the la t its ,columns were filled with originality, -careful thought and no small amount -of wit and humor. It i indeed a -credit to Philalethea and especially to the· editorial staff and others who may have contributed to its success. , The girls did not only the editorial work, but even read proof, wrote heads and solicited advertising. They handled the work in a splendid man­ ner. We hall be agerly looking for the next number and hope the girl can arrange to put out the Re­ view more frequenty than they have in the past. Four Pages. We feel that we do not owe to our readers an apology for a four page issue thi week, but m rely want to offer a few words of explanation. Anyone who is dir ctly in touch with conditions in Otterbein knows that during the last week things were quite at a standstill. Aside from tenni , a couple of "pushes," "grass lunches" and a f w canoeing parties there has ·been absolutely nothing to br ak the monotony of studious labor and mili­ tary drill. Under these circumstances we be­ lieve it is better to put out a four­ page i sue of news this week than to print eight pages of "filler."

A DOZEN YEARS of satisfac­ tory SERVICE has made my Deer Childern: Wei I cant rite you much this time cuse a I wuz cuttin sum saplins fer pole fer tew have beans clim upon I mistook the distence an sprained my ritin rist. Them gurls diddent put out sech a bad papper last weak did they. By gosh youll have tew do purty durn fine if you wanta beet the wimmin on that pri~tin paper stuff. Henery you sa they is gittin· tew be a awful bunch uv feller leavin skule an you feal like a waisis. in the desert of wimmin. Wei thats all rite Id like to be a waisis myself if twarnt fer maw who is so partickuler. But you stay down tew skule an git all the larnin you can an cum home fixed fer tew work like sixty (60) cuse thers goin tew be lots tew do consid­ erin stuffs just gittin up an growin. Mi ter Job Dasher wuz ta Ikin bout commencement which he sez means skule littin out an hes got it all fig­ ured that you orter be let out the fer t uv June this yeer on ackount uv the war and cuse you cud be used tew wurk on the farms or in fackteries and a-forth. Wei by go h my ritin rist is hurtin an I ges I better top cuse maw sez I orter give it rest an maw knos. Luv,

ever increasing business what it _isto.:day.

PLATE SUNK rhey have the appearance of old etchings. Reasonable LET US SHOW YOU.

The North·End Grocery •; 48 North State St. A good place to order all those "PICNIC FIXINS" Clean Goods-Prices Right Club Patronage Given Special Attention. Seeds for your garden. USE THE PHONE

For Your Groceries Special attention to Students.

SEASONABLE SUGGESTIONS Talc-We have some fine pecials just in and all the standards. The fine t in Perfumes, some new odors. Face Creams and Soaps, especially ya!' .

If you have your

( Continued from page one.) the little silver box. A spade com­ pleted the equipment. One duty which both victims had in common was that of escorting a girl to and from the Hall after each cla s throughout the day. But there wa even a handicap attached to this for .they were not allowed to walk witl1 any young lady with whom they had ev r had a "date."

(Continued from page one.) fusion due to constantly shifting posi­ tion has been removed· and the men are working better than ever. The perman nt corporal have been chos­ en. All have tho e qualitie of lead­ ership so necessary to officers, and are bringing out the best in their respec­ tive squads.

IT WILL BE BETTER With superior ~acilities over all for producing the best in photography The largest, finest and best equipped Gallery in America. • See our representative GLEN 0. REAM As to special Otterbein

The New Straw Hats Here for !You, Men !

LOCALS. H. G. Walters spent several day at his home at Lima. Let us fit you in a pair of K d , cool and comfortable. E. J. orris. -Adv. Rev. and Mr . E. M. ounsellor of Dunkirk visited with their on, "Bill" unday and Monday. Bill left Mon­ day for Fort B nj. Harri on. Post cards and tationery. The Va­ riety Shop.-Adv. An eight-pound son was born to E. Mr. and Mrs. R. P. Ernsberger, Walnut street. Mrs. C. H. Hutson of Findlay spent several days here visiting her son, Dale. H. D. Cassel made a trip to Cleve­ land and Oberlin over the week-end. The place to get good fresh Pea­ nuts. The Variety Shop.-Adv. G. E. Smith, ex-student, visited friends here this week. He stopped off here on his way from his home at Strasburg to Chicago, where he is attending Moody Institute. B. V. D.'s and Porous Knit all price . E. J. N.-Adv. Glenn 0. Ream visited his parents at Rising Sun this week. Wm. A. Snorf, who has enlisted in the hospital corp , returned aturday to vi it his friends here. At present he is at his home at Green.ville. Miss Lois Helfer and Mr. Buehl Whiteshal of 0. S. U. visited with Gla<.lys Swigart unday. What Duck Pants, White Hats, Tennis Shoes, Balls and Rackets. E. J. Norris.-Adv. Harry P. Cook has been accepted at the Ft. Benj. Harrison training camp. He left- for Ind,ianapolis Friday night. COCHRAN NOTES. Mi s Marie Wagoner, Miss Alta and Miss Audrey el on took supper at the Hall Monday night. Gladys Swigart and Agnes Wright went to the latter's home in Canal Winchester, over Tuesday night. Mi s Ruth oel, of Canton is visit­ ing Ruth Van Kirk, for several days. Miss Esther Weir and Miss Ida Marie Snelling, of Baltimore, have been at the Hall for several days, with Jessie Weir. Ruth Pl tcher, class of '16, was at the Hall W dnesday. Mrs. Kurtz and Mrs. Shawn have been visiting the Kurtz girls. Miss Dorothy Gilbert and Miss Harris, of Dayton, have been with Jan t Gilbert, the past few days. Esther an Gundy ha returned home for the rernaind r of the year. Gaynelle McMahon, who has been troubled with rheumatism, has gon home for a little rest. Because of sickness, ell Johnson was called to Bowling Green, Satur­

Buy YourSummerSuitsNow There is plenty of time before the men who will be "Called to the Colors" will have to report for duty. Now is the time to buy Summer Suits-with the whole season before you, whether you will be called for army service or not. Sec::etary of War Baker says : "Owing to the depleted state of our supplies it will not be practicable to call .out the first 500,000 men to be rais.ed under the selective conscription act until about Semptember, so there would be no appreciable interference with the labor supply of the country until that date." this a young men's store-with MENfind YOUNG assortments of them, too, including

If you are wanting

the real new styles, they are all here. If you want the staple straw head-covering for summer-here too. And every straw hat as good as possible to sell for the price you pay for it. High time you were getting under one of these fine Lazarus straws-it will only take you a minute find the style and kind you want-all arranged for easy selecting. Prices range from $2 for Senets to $10 for Genuine Pana:nas and Balibuntahls. (First Floor)

The guest at th Hall at unday dinner were M.i s a nee, John Carl and Rob rt Barn s, F. J. Gilbert Dorothy Gilbert, Mis Harri , Mr . Kurtz and Mrs. hawn, _Mrs. obl and Loui e, Esth r Weir, Ida Snelling, Mary Clym r, Mrs. and Mr. enger. day. To t II of all the picnics which have Leona Paul was called to Spring­ been enjoyed lately would tak an is­ field becau e of the death of an uncle. sue of the Review alone; so thi a just of Over the week-end Gladys Howard a word to remind the participator visited in Circleville, Rachel Cox in the good times. Ladi s' Phoeni.x Si k Hose. E. J. Marysville, and Mary Tinstman in Norris.-Adv. Gahanna.