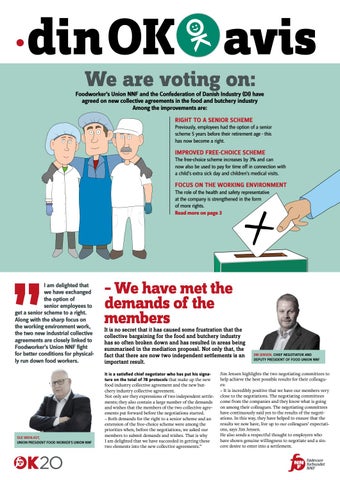 din OK avis We are voting on:

Foodworker’s Union NNF and the Confederation of Danish Industry (DI) have agreed on new collective agreements in the food and butchery industry Among the improvements are: RIGHT TO A SENIOR SCHEME Previously, employees had the option of a senior scheme 5 years before their retirement age - this has now become a right.

IMPROVED FREE-CHOICE SCHEME The free-choice scheme increases by 3% and can now also be used to pay for time off in connection with a child’s extra sick day and children’s medical visits.

FOCUS ON THE WORKING ENVIRONMENT The role of the health and safety representative at the company is strengthened in the form of more rights. Read more on page 3

I am delighted that we have exchanged the option of senior employees to get a senior scheme to a right. Along with the sharp focus on the working environment work, the two new industrial collective agreements are closely linked to Foodworker’s Union NNF fight for better conditions for physically run down food workers.

– We have met the demands of the members

It is no secret that it has caused some frustration that the collective bargaining for the food and butchery industry has so often broken down and has resulted in areas being summarised in the mediation proposal. Not only that, the fact that there are now two independent settlements is an important result. It is a satisfied chief negotiator who has put his signature on the total of 78 protocols that make up the new food industry collective agreement and the new butchery industry collective agreement. Not only are they expressions of two independent settlements; they also contain a large number of the demands and wishes that the members of the two collective agreements put forward before the negotiations started. – Both demands for the right to a senior scheme and an extension of the free-choice scheme were among the priorities when, before the negotiations, we asked our members to submit demands and wishes. That is why I am delighted that we have succeeded in getting these two elements into the new collective agreements.”

– The members can mirror themselves in the settlement – We wanted to negotiate a framework agreement to secure the piecework system. However, even if employers were receptive, they would not guarantee that wage increases would not disappear with piecework restructuring. Therefore, the increases are instead on the hourly wage, so everyone benefits from the increases no matter what. BRIAN VESTERGAARD, CHAIRMAN OF THE TRADE UNION REPRESENTATIVE COLLEGE AND MEMBER OF THE NEGOTIATING COMMITTEE FOR THE BUTCHERY INDUSTRY

Tom Jensen, Negotiation Secretary for the Butchery Industry, hopes that the members can recognise the wishes and demands they made before the negotiations in the result they must now vote on. In the autumn of 2019, Tom Jensen and the other negotiators travelled for two weeks around the country with the OK coach to collect demands and wishes from the union’s members. He is now pleased with the close correlation between the wishes of the members and the result that have been obtained: – Many have called for an extension of the freechoice scheme, and they have been given that. The scheme is good because it can be used differently depending on where you are in life. Some may need a little more money in their hands here and now, others may need time with the children or shorter

work weeks, and others may again see the benefit of having a little more in their pension. The scheme has been further expanded, as families with children can now use it to pay for time off in connection with an extra child’s sick day or medical visits. With the total increase of 3% over the period, the free-choice scheme now stands at 9.20% as of 1 March 2022.

Many have called for an extension of the free-choice scheme, and they have been given that. The scheme is good because it can be used differently depending on where you are in life.

improvements – I think we have been given more security. Both in the form of an increased focus on the working environment, which is to ensure that we do not get ill and run down, but also in the form of the two weeks protection against being dismissed during illness. Claims for pay increases can easily have a strong presence, but a pay increase is not worth anything if your job makes you ill or you lose it. BETINA MOSLUND, TRADE UNION REPRESENTATIVE AT FERTIN PHARMA AND MEMBER OF THE NEGOTIATING COMMITTEE FOR THE FOOD INDUSTRY COLLECTIVE AGREEMENT

The members of the Food Industry Collective Agreement can look forward to a number of improvements. Improvements that benefit all members regardless of age. For For Anette Sønderby Larsen, Negotiation Secretary for the Food Industry, it is important that the Food Industry Collective Agreement leans on the demands and wishes that the members have put forward. Therefore, she is delighted with the improved free-choice scheme, the right to a senior scheme and the increases in wages and allowances. However, she also notes with satisfaction that there has been room for brand new improvements: – We have extended the period during which you can get paid during illness. At the same time, we have secured a two-week protection against being dismissed during illness. It provides security for

members who are afflicted by illness or injury, and these are actions that I hope will add value to members, and which we may be able to build upon in the future, she says. The Food Industry Collective Agreement covers a number of different industries. This means that after the total increase of 3% over the period, the free-choice scheme is 9.25% as of 1 March 2022 - on refinement, however, 9.20%.

We have extended the period during which you can get paid during illness. At the same time, we have secured a two-week protection against being dismissed during illness.

This is what you get in your new collective agreement

Previously, you had the option of a senior scheme from five years before reaching your retirement age in agreement with the employer. With OK20, the option has been made a right to which you are entitled. Seniors are also entitled to receive their pension as salary.

The role of the health and safety representative at the company is strengthened. The collective agreement ensures that the person in question is given the necessary time to carry out their duties and are provided with the necessary IT tools. At the same time, he or she is entitled to attend relevant courses.

The exec the Foodituve commitee NNF dec Worker’s Unionof recomme ides whether i to vote y nds its membe t recommees or no. Read i rs ts ndation a t o k 20. nnf.dk

How it happens: It’s not just your collective agreement that needs to be voted on in the near future. Approx. 600,000 private-sector employees are to have a new collective agreement. In some areas, an agreement has been agreed, while it has been impossible elsewhere. The mediator brings together all the settlements reached, as well as the conditions for renewing the collective agreements which the parties have not been able to agree on in a mediation proposal to be voted on. The vote will take place as one unanimous vote. Either it will be a yes across the board, or it will be no for all the approx. 600,000 employees included in the mediation proposal.

If at least 40% of the voting members take part in the vote, it will be decided by a simple majority whether it will be a yes or a no. If less than 40% cast their vote, at least 25% of all voters must have voted no to reject the mediation proposal and trigger a major conflict.

If you have not received a ballot paper:

You have the right to vote when you are a member of Food Worker’s Union NNF and: 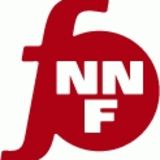 Foodworker’s Union NNF and the Confederation of Danish Industry (DI) have agreed on new collective agreements in the food and butchery indus...

Foodworker’s Union NNF and the Confederation of Danish Industry (DI) have agreed on new collective agreements in the food and butchery indus...