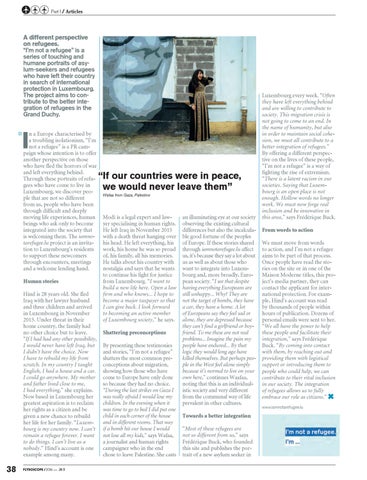 A different perspective on refugees. “I’m not a refugee” is a series of touching and humane portraits of asylum-seekers and refugees who have left their country in search of international protection in Luxembourg. The project aims to contribute to the better integration of refugees in the Grand Duchy.

n a Europe characterised by a troubling isolationism, “I’m not a refugee” is a PR cam­ paign whose intention is to offer another perspective on those who have fled the horrors of war and left everything behind. Through these portraits of refu­ gees who have come to live in Luxembourg, we discover peo­ ple that are not so different from us, people who have been through difficult and deeply moving life experiences, human beings who ask only to become integrated into the society that is welcoming them. The iamno­ tarefugee.lu project is an invita­ tion to Luxembourg’s residents to support these newcomers through encounters, meetings and a welcome lending hand.

“If our countries were in peace, we would never leave them”

Human stories Hind is 28 years old. She fled Iraq with her lawyer husband and three children and arrived in Luxembourg in November 2015. Under threat in their home country, the family had no other choice but to leave. “If I had had any other possibility, I would never have left Iraq, but I didn’t have the choice. Now I have to rebuild my life from scratch. In my country I taught English, I had a house and a car. I could go anywhere. My mother and father lived close to me, I had everything,” she explains. Now based in Luxembourg her greatest aspiration is to reclaim her rights as a citizen and be given a new chance to rebuild her life for her family. “Luxem­ bourg is my country now. I can’t remain a refugee forever. I want to do things. I can’t live as a nobody.” Hind’s account is one example among many.

Modi is a legal expert and law­ yer specialising in human rights. He left Iraq in November 2015 with a death threat hanging over his head. He left everything, his work, his home he was so proud of, his family, all his memories. He talks about his country with nostalgia and says that he wants to continue his fight for justice from Luxembourg. “I want to build a new life here. Open a law firm and who knows... I hope to become a major taxpayer so that I can give back. I look forward to becoming an active member of Luxembourg society,” he says. Shattering preconceptions By presenting these testimonies and stories, “I’m not a refugee” shatters the most common pre­ conceptions about migration, showing how those who have come to Europe have only done so because they had no choice. “During the last strikes on Gaza I was really afraid I would lose my children. In the evening when it was time to go to bed I did put one child in each corner of the house and in different rooms. That way if a bomb hit our house I would not lose all my kids,” says Wafaa, a journalist and human rights campaigner who in the end chose to leave Palestine. She casts

an illuminating eye at our society observing the existing cultural differences but also the incalcula­ ble good fortune of the peoples of Europe. If these stories shared through iamnotarefugee.lu affect us, it’s because they say a lot about us as well as about those who want to integrate into Luxem­ bourg and, more broadly, Euro­ pean society. “I see that despite having everything Europeans are still unhappy... Why? They are not the target of bombs, they have a car, they have a home. A lot of Europeans say they feel sad or alone, they are depressed because they can’t find a girlfriend or boy­ friend. To me these are not real problems... Imagine the pain my people have endured... By that logic they would long ago have killed themselves. But perhaps peo­ ple in the West feel alone simply because it’s normal to live on your own here,” continues Waafaa, noting that this is an individual­ istic society and very different from the communal way of life prevalent in other cultures.

Luxembourg every week. “Often they have left everything behind and are willing to contribute to society. This migration crisis is not going to come to an end. In the name of humanity, but also in order to maintain social cohe­ sion, we must all contribute to a better integration of refugees.” By offering a different perspec­ tive on the lives of these people, “I’m not a refugee” is a way of fighting the rise of extremism. “There is a latent racism in our societies. Saying that Luxem­ bourg is an open place is not enough. Hollow words no longer work. We must now forge real inclusion and be innovative in this area,” says Frédérique Buck. From words to action We must move from words to action, and I’m not a refugee aims to be part of that process. Once people have read the sto­ ries on the site or in one of the Maison Moderne titles, this pro­ ject’s media partner, they can contact the applicant for inter­ national protection. For exam­ ple, Hind’s account was read by thousands of people within hours of publication. Dozens of personal emails were sent to her. “We all have the power to help these people and facilitate their integration,” says Frédérique Buck. “By coming into contact with them, by reaching out and providing them with logistical support or introducing them to people who could help, we can contribute to their vital inclusion in our society. The integration of refugees allows us to fully embrace our role as citizens.”. www.iamnotarefugee.lu

Towards a better integration “Most of these refugees are not so different from us,” says Frédérique Buck, who founded this site and publishes the por­ trait of a new asylum seeker in