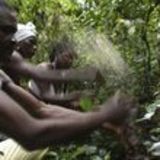 Our current focus is in Liberia, West Africa, where, after 14 years of civil war, peace is taking root. Our American and Liberian teams collaborate with indigenous people whose traditional peacemaking customs bring divided communities together, encourage women's leadership, reunite elders and youth, including ex-combatants, and teach co-habitation with the natural world. Our center of activity is the city of Voinjama and its environs in Lofa County, near the Guinea and Sierra Leone borders and expanding into nearby Nimba County, where the 14-year civil war began. The everyday gandhis approach is unique in that it is guided by traditional grassroots peacemaking. We work closely with community leaders and local government officials to catalyze the organic peacemaking momentum already present within the community in such a way that there is a multiplying effect. We support local initiatives, document key stories and educate the public through media in many forms.