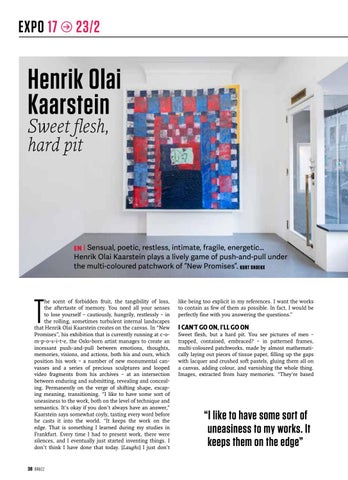 he scent of forbidden fruit, the tangibility of loss, the aftertaste of memory. You need all your senses to lose yourself – cautiously, hungrily, restlessly – in the rolling, sometimes turbulent internal landscapes that Henrik Olai Kaarstein creates on the canvas. In “New Promises”, his exhibition that is currently running at c-om-p-o-s-i-t-e, the Oslo-born artist manages to create an incessant push-and-pull between emotions, thoughts, memories, visions, and actions, both his and ours, which position his work – a number of new monumental canvasses and a series of precious sculptures and looped video fragments from his archives – at an intersection between enduring and submitting, revealing and concealing. Permanently on the verge of shifting shape, escaping meaning, transitioning. “I like to have some sort of uneasiness to the work, both on the level of technique and semantics. It’s okay if you don’t always have an answer,” Kaarstein says somewhat coyly, tasting every word before he casts it into the world. “It keeps the work on the edge. That is something I learned during my studies in Frankfurt. Every time I had to present work, there were silences, and I eventually just started inventing things. I don’t think I have done that today. [Laughs] I just don’t

like being too explicit in my references. I want the works to contain as few of them as possible. In fact, I would be perfectly fine with you answering the questions.”

I can’t go on, I’ll go on Sweet flesh, but a hard pit. You see pictures of men – trapped, contained, embraced? – in patterned frames, multi-coloured patchworks, made by almost mathematically laying out pieces of tissue paper, filling up the gaps with lacquer and crushed soft pastels, gluing them all on a canvas, adding colour, and varnishing the whole thing. Images, extracted from hazy memories. “They’re based

“I like to have some sort of uneasiness to my works. It keeps them on the edge” 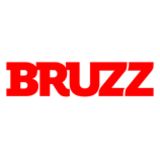