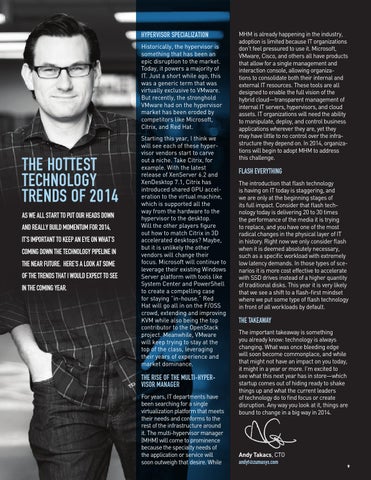 HYPERVISOR SPECIALIZATION Historically, the hypervisor is something that has been an epic disruption to the market. Today, it powers a majority of IT. Just a short while ago, this was a generic term that was virtually exclusive to VMware. But recently, the stronghold VMware had on the hypervisor market has been eroded by competitors like Microsoft, Citrix, and Red Hat.

THE HOTTEST TECHNOLOGY TRENDS OF 2014 AS WE ALL START TO PUT OUR HEADS DOWN AND REALLY BUILD MOMENTUM FOR 2014, IT’S IMPORTANT TO KEEP AN EYE ON WHAT’S COMING DOWN THE TECHNOLOGY PIPELINE IN THE NEAR FUTURE. HERE’S A LOOK AT SOME OF THE TRENDS THAT I WOULD EXPECT TO SEE IN THE COMING YEAR.

Starting this year, I think we will see each of these hypervisor vendors start to carve out a niche. Take Citrix, for example. With the latest release of XenServer 6.2 and XenDesktop 7.1, Citrix has introduced shared GPU acceleration to the virtual machine, which is supported all the way from the hardware to the hypervisor to the desktop. Will the other players figure out how to match Citrix in 3D accelerated desktops? Maybe, but it is unlikely the other vendors will change their focus. Microsoft will continue to leverage their existing Windows Server platform with tools like System Center and PowerShell to create a compelling case for staying ”in-house.” Red Hat will go all in on the F/OSS crowd, extending and improving KVM while also being the top contributor to the OpenStack project. Meanwhile, VMware will keep trying to stay at the top of the class, leveraging their years of experience and market dominance.

THE RISE OF THE MULTI-HYPERVISOR MANAGER For years, IT departments have been searching for a single virtualization platform that meets their needs and conforms to the rest of the infrastructure around it. The multi-hypervisor manager (MHM) will come to prominence because the specialty needs of the application or service will soon outweigh that desire. While

MHM is already happening in the industry, adoption is limited because IT organizations don’t feel pressured to use it. Microsoft, VMware, Cisco, and others all have products that allow for a single management and interaction console, allowing organizations to consolidate both their internal and external IT resources. These tools are all designed to enable the full vision of the hybrid cloud—transparent management of internal IT servers, hypervisors, and cloud assets. IT organizations will need the ability to manipulate, deploy, and control business applications wherever they are, yet they may have little to no control over the infrastructure they depend on. In 2014, organizations will begin to adopt MHM to address this challenge.

FLASH EVERYTHING The introduction that flash technology is having on IT today is staggering, and we are only at the beginning stages of its full impact. Consider that flash technology today is delivering 20 to 30 times the performance of the media it is trying to replace, and you have one of the most radical changes in the physical layer of IT in history. Right now we only consider flash when it is deemed absolutely necessary, such as a specific workload with extremely low latency demands. In those types of scenarios it is more cost effective to accelerate with SSD drives instead of a higher quantity of traditional disks. This year it is very likely that we see a shift to a flash-first mindset where we put some type of flash technology in front of all workloads by default.

THE TAKEAWAY The important takeaway is something you already know: technology is always changing. What was once bleeding edge will soon become commonplace, and while that might not have an impact on you today, it might in a year or more. I’m excited to see what this next year has in store—which startup comes out of hiding ready to shake things up and what the current leaders of technology do to find focus or create disruption. Any way you look at it, things are bound to change in a big way in 2014. 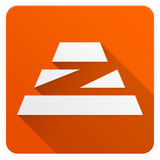