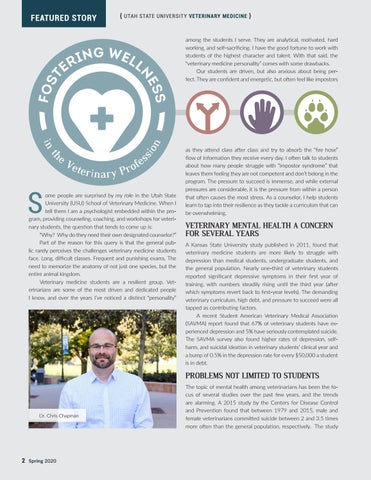 { UTAH STATE UNIVERSITY VETERINARY MEDICINE } among the students I serve. They are analytical, motivated, hard working, and self-sacrificing. I have the good fortune to work with students of the highest character and talent. With that said, the “veterinary medicine personality” comes with some drawbacks. Our students are driven, but also anxious about being perfect. They are confident and energetic, but often feel like impostors

ome people are surprised by my role in the Utah State University (USU) School of Veterinary Medicine. When I tell them I am a psychologist embedded within the program, providing counseling, coaching, and workshops for veterinary students, the question that tends to come up is: “Why? Why do they need their own designated counselor?” Part of the reason for this query is that the general public rarely perceives the challenges veterinary medicine students face. Long, difficult classes. Frequent and punishing exams. The need to memorize the anatomy of not just one species, but the entire animal kingdom. Veterinary medicine students are a resilient group. Veterinarians are some of the most driven and dedicated people I know, and over the years I’ve noticed a distinct “personality”

as they attend class after class and try to absorb the “fire hose” flow of information they receive every day. I often talk to students about how many people struggle with “impostor syndrome” that leaves them feeling they are not competent and don’t belong in the program. The pressure to succeed is immense, and while external pressures are considerable, it is the pressure from within a person that often causes the most stress. As a counselor, I help students learn to tap into their resilience as they tackle a curriculum that can be overwhelming.

VETERINARY MENTAL HEALTH A CONCERN FOR SEVERAL YEARS A Kansas State University study published in 2011, found that veterinary medicine students are more likely to struggle with depression than medical students, undergraduate students, and the general population. Nearly one-third of veterinary students reported significant depressive symptoms in their first year of training, with numbers steadily rising until the third year (after which symptoms revert back to first-year levels). The demanding veterinary curriculum, high debt, and pressure to succeed were all tapped as contributing factors. A recent Student American Veterinary Medical Association (SAVMA) report found that 67% of veterinary students have experienced depression and 5% have seriously contemplated suicide. The SAVMA survey also found higher rates of depression, selfharm, and suicidal ideation in veterinary students’ clinical year and a bump of 0.5% in the depression rate for every $50,000 a student is in debt.

PROBLEMS NOT LIMITED TO STUDENTS

The topic of mental health among veterinarians has been the focus of several studies over the past few years, and the trends are alarming. A 2015 study by the Centers for Disease Control and Prevention found that between 1979 and 2015, male and female veterinarians committed suicide between 2 and 3.5 times more often than the general population, respectively. The study 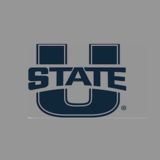 This issue focuses on wellness and resilience for veterinary medical professionals, including stories of alumni and friends of the school an...

This issue focuses on wellness and resilience for veterinary medical professionals, including stories of alumni and friends of the school an...