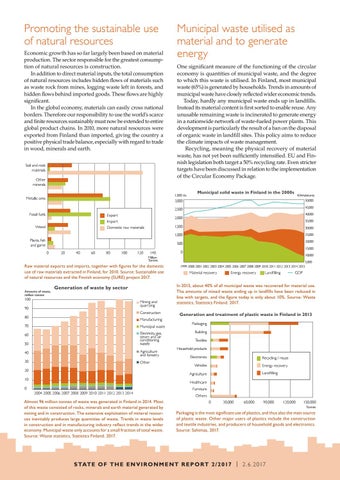 Promoting the sustainable use of natural resources Economic growth has so far largely been based on material production. The sector responsible for the greatest consumption of natural resources is construction. In addition to direct material inputs, the total consumption of natural resources includes hidden flows of materials such as waste rock from mines, logging waste left in forests, and hidden flows behind imported goods. These flows are highly significant. In the global economy, materials can easily cross national borders. Therefore our responsibility to use the worldâ&#x20AC;&#x2122;s scarce and finite resources sustainably must now be extended to entire global product chains. In 2010, more natural resources were exported from Finland than imported, giving the country a positive physical trade balance, especially with regard to trade in wood, minerals and earth. Soil and rock materials Other minerals

Municipal waste utilised as material and to generate energy One significant measure of the functioning of the circular economy is quantities of municipal waste, and the degree to which this waste is utilised. In Finland, most municipal waste (65%) is generated by households. Trends in amounts of municipal waste have closely reflected wider economic trends. Today, hardly any municipal waste ends up in landfills. Instead its material content is first sorted to enable reuse. Any unusable remaining waste is incinerated to generate energy in a nationwide network of waste-fueled power plants. This development is particularly the result of a ban on the disposal of organic waste in landfill sites. This policy aims to reduce the climate impacts of waste management. Recycling, meaning the physical recovery of material waste, has not yet been sufficiently intensified. EU and Finnish legislation both target a 50% recycling rate. Even stricter targets have been discussed in relation to the implementation of the Circular Economy Package.

Municipal solid waste in Finland in the 2000s

Raw material exports and imports, together with figures for the domestic use of raw materials extracted in Finland, for 2010. Source: Sustainable use of natural resources and the Finnish economy (SURE) project 2017. Amounts of waste, million tonnes

Generation of waste by sector

In 2015, about 40% of all municipal waste was recovered for material use. The amounts of mixed waste ending up in landfills have been reduced in line with targets, and the figure today is only about 10%. Source: Waste statistics, Statistics Finland. 2017. Generation and treatment of plastic waste in Finland in 2013 Packaging Building Textiles Household products Electronics

Almost 96 million tonnes of waste was generated in Finland in 2014. Most of this waste consisted of rocks, minerals and earth material generated by mining and in construction. The extensive exploitation of mineral resources inevitably produces large quantities of waste. Trends in waste levels in construction and in manufacturing industry reflect trends in the wider economy. Municipal waste only accounts for a small fraction of total waste. Source: Waste statistics, Statistics Finland. 2017.

Packaging is the most significant use of plastics, and thus also the main source of plastic waste. Other major users of plastics include the construction and textile industries, and producers of household goods and electronics. Source: Sahimaa, 2017.

Shifting from a linear economy to a circular economy

Shifting from a linear economy to a circular economy