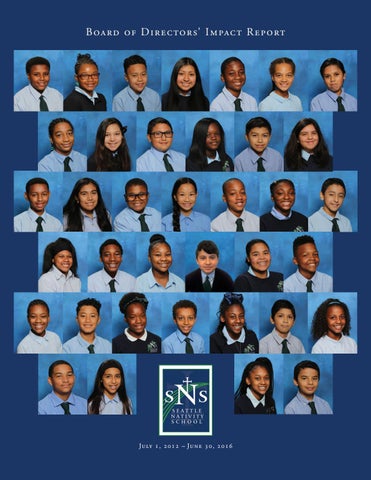 {A g r a d u a t e a t g r a d u a t i o n } The characteristics of the graduate at graduation describe a young student from various perspectives. Jesuit education is focused on whole person education: mind, spirit, and body. Jesuit education accomplishes this through cura personalis (personalized care and concern for the individual) and through a holistic curriculum. Jesuit education also aims to graduate students who possess the desire and the personal resources to be men and women for and with others. â&amp;#x20AC;&amp;#x201D;Adapted from Profile of the Graduate at Graduation, Jesuit Schools Network

The Seattle Nativity School graduate at graduation strives to be:

At Seattle Nativity School, we see our mission as an investment in the futures of our Seattle community. We opened a middle school as a way to provide hope, opportunity, and inspiration through education. Hope — to provide something better for our students and their families. Opportunity — encouraging young people, in a safe and supportive environment, to explore their passions and future professions. Inspiration — empowering kids who have the deck stacked against them to experience what they are capable of achieving. When we first conceived of bringing a Nativity School to Seattle, our goal was to open a school with a mission to break the cycle of poverty through education. We took the “blueprint” of the Nativity model that originated 40 years ago, has since expanded to sixty schools and has a proven record of increasing academic performance, stimulating spiritual growth and instilling a responsibility to give back. At Seattle Nativity School we strive to educate the whole person so our students will not only be great students, but they will also be great people in the service of others. Education is more than definitions and labs. It is about exploration, acquisition of knowledge and empowerment. It is about a fundamental change for the better in the lives of our kids and their families, and our greater community.

A n investment in knowledge pays the best interest.

Our inaugural graduation for the Class of 2016 was a celebration of the virtue, ‘open to growth.’ The Class of 2016 experienced personal growth as well as the growth and expansion of the school. As they were seeking knowledge, we were putting our program together in a meaningful way to serve and fulfill our mission. Each student in the Class of 2016 was accepted into an independent, college preparatory high school; a fantastic achievement. Attending a college preparatory high school will lay the groundwork for the next step. Many of our students will be the first in their families to attend college. We hope our Seattle Nativity School students will contribute to their community by inspiring those who have supported them — teachers, benefactors, volunteers, parents and siblings. Our students will take their experience at Seattle Nativity School and break the cycle of poverty. Thanks to so many benefactors who make Seattle Nativity School a reality and opportunity for the impoverished of Central and South Seattle. It delivers — one student at a time — a long-term solution, addressing the challenges so many underserved communities face — access to quality education, holistic support and growth opportunities. I am honored to be part of this mission. I am thankful that others continue to actively support this mission. I invite you to bring others to the important work that is the Seattle Nativity School. Michael Mot t Chair of the Board of Directors

Dear Friends of Seattle Nativity School, One of the best ways our students demonstrate their intellectual competence is through their test scores. In 2014 and 2015, we administered the Iowa Test of Basic Skills (ITBS). Among other things, this nationally recognized test allows us to compare student growth from year to year. Overall, our students demonstrated 2 years of growth in one academic year. Of special note were our test scores in both Mathematics and Science. In these subject areas, 7th and 8th graders demonstrated 2.1 years of growth in just one academic year. This is especially exciting for Nativity since we are a science, technology, engineering and mathematics (STEM) school. Even with the STEM focus, however, our students performed strongly in the Language Arts components of the testing. Students demonstrated, on the average, 2.2 years of growth on the Conventions of Writing portion of the exam. Of further note is that the Class of 2016 began their 7th grade year testing, on the average, at the 6th grade level. As this class entered into their final year of middle school, nearly all of them tested at grade level and were thus on a trajectory that had them “caught up” and ready for the rigors of high school work. We are grateful to all who support our students as they grow and become intellectually competent.

Our students demonstrated a high level of progress on the ITBS test with 2 years of growth in 1 academic year.

The national average for student progress, as measured on the ITBS standardized test, is 1 year of growth in 1 academic year.

During the 2015-16 fiscal year, Seattle Nativity School educated 37 students, filling grades 6, 7 and 8. With enrollment in all three grade levels, curriculum established and Graduate Support implemented, our start-up plans of a middle school came to fruition. We are grateful for the generosity of the Pacific Northwest community and beyond for supporting an education that families could otherwise not afford. Through responsible stewardship, we are demonstrating the financial sustainability of the tuition-free model.

A surplus of $2,041 was transferred to the capital and operations reserve fund.

In one year, volunteers have supported our students beyond measure. For every school day of 9 hours, approximately 3.5 hours is filled with volunteer service totalling over 75 school days in one year. Volunteers offer Seattle Nativity School expertise, talent, knowledge, and effort coupled with commitment. Every hour is a personal and extraordinary gift — we are grateful.

{C o m m i t t e d t o D o i n g Ju s t i c e } With loving gratitude to all of our supporters who are committed to a more just world—from the very first gift in 2012 through June 30, 2016— every gift supported our transformative mission by providing a tuition-free education for young people in need.

Seattle Nativity School is a Catholic, Jesuit-endorsed, Science, Technology, Engineering and Mathematics (STEM) middle school seeking to break the cycle of poverty through an education that nourishes souls and ignites leaders for love and service.

{L o v i n g } The graduate at graduation is growing in self-acceptance and in recognizing that he or she is loved by God and others. â&amp;#x20AC;&amp;#x201D;Adapted from Profile of the Graduate at Graduation, Jesuit Schools Network

From just an idea to a middle school with its first graduating class, Seattle Nativity School is proud to introduce its first Impact report. We are grateful to everyone who has supported Nativity and its students, helping us to grow into a fully-operational tuition-free middle school.