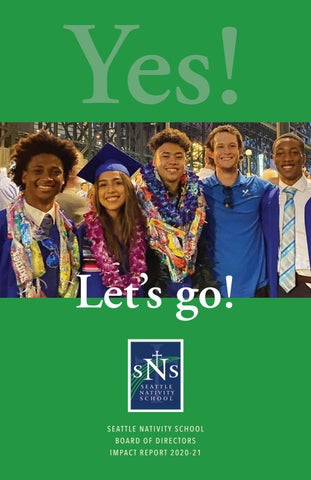 Yes! Let’s go! Last year, in the face of COVID restrictions, Nativity students continued to receive an excellent STEM education with online, hybrid, and in-person learning models. To make those models successful, our faculty and staff worked with families to ensure each student had a computer and access to the internet from home. Our annual fundraising events continued online. The entire Nativity School family came together to fulfill our mission. With our new inspiring facilities, the former St. Edward School, we’ve welcomed two sixth-grade classes for the second year in a row and are now serving 75 middle school students – next year, with your continued support, all three grades will have two classes. Our dedicated teachers provide a rigorous curriculum that has allowed our graduating students to attend college preparatory high schools every year since our first graduating Class of 2016. Through our Graduate Support Program, our students continue to enjoy your

support and thrive. Students from our Classes of 2016 and 2017 are now attending elite colleges including Arizona State University, Gonzaga University, St. Martin’s University, University of Washington, the U.S. Air Force Academy, and Wayne State University. Walt Whitman wrote: Afoot and light-hearted I take to the open road, Healthy, free, the world before me, The long brown path before me leading wherever I choose. Our students are amazing young people, and they can go wherever they choose because you have chosen to invest in their future. We invite you to campus for a student-led tour and to meet some of the students whose lives you are changing through your support. Seattle Nativity School will continue to grow in the coming years as we expand the reach of our mission. We thank you for your support. The path is open before us. Yes! Let’s go!

In the Classroom Hours of Code Every year, we expand our STEM curriculum and include the worldwide event, Hour of Code. One of our Board of Directors, Janeth Moran of Amazon, and volunteer Sam Perlmutter of Microsoft, created a robust event for our students. The format changed from a 1-hour, in-person Hour of Code to a 3-hour online Hours of Code with volunteers from across the country.

Professionals from across the USA, shared their stories, career path, and answered questions from Nativity students.

The whiteboard and notes used in the Hour #2 in an online classroom for the Business Strategy brainstorm session.

Imagine being a middleschool student in a new class in an all-virtual setting... Can I ask a question in class? How do I make friends? Can we discuss topics?

In this new context, teachers used an app which supported: 1. socialization 2. peer to peer editing 3. classroom participation 4. public speaking practice As Nativity transitioned from all-virtual learning to hybrid-learning, and finally to in-person learning, the app continued to keep students and teachers connected. Bonus!

Creating and coding a website as a team, and utilizing the new ideas to satisfy the customer &quot;pain&quot;points and communicate a story.

The Nativity Class of 2017 graduated from high school in June 2021. 89% of this class transitioned to a 2- or 4-year college or university for the Fall of 2021. The local average is 47% for low-income high school seniors transitioning to college.1 1

How did I impact student success? Additional Supports Behind the Scenes

Every gift impacts the tuition-free education of our students and graduates. The numbers are calculated from our operating budget.

on a personal pathway through high school, college and into the work force. 8% Behind the Scenes | Working administrative details that make every day run

smoothly, including development and marketing. 13% Additional Supports | Providing each student with additional supports of meals,

computers, books, supplies, subscriptions, and more. 14% Facilities | Moving to our new location in 2020 and keeping the building safe,

and secure with all of the basic amenities necessary for our academic program. 60% Mission-driven Faculty &amp; Staff | Providing individualized instruction, extended

days with support for Study Hall, as well as outreach and care for graduates. 6

From the first gift in 2012 through the end of our fiscal year, June 30, 2021, we are honored to thank all who have invested in the education of our young people. This list represents cumulative giving by our generous community. $500,000 or more Anonymous (1) Carlene Gaudette Tom &amp; Mary Herche

In memory of Bimaldeep Sandhu Laurence Hicks In memory of Mildred Simms, My mom, a nurse, and school teacher Sonya Johnston

In March 2020, Paul &amp; Laurin Sleeth pulled up with a delivery of pantry items. Their idea and call to serve launched our pantry program. Many have supported this effort, helping our families during the pandemic. Today, this pantry continues through a grant from the Raskob Foundation for Catholic Activities and a partnership with Little Free Pantry and our dedicated volunteers.

Leadership 2020-21 Board of Directors

Emeriti Board of Directors

Through our Graduate Support Program, three of our high-school-age graduates spent three weeks at the Philmont Scout Ranch in New Mexico. The program included training in outdoor survival, leadership and teamwork.

Seattle Nativity School is a Catholic, Jesuit-endorsed, Science, Technology, Engineering, and Mathematics (STEM) middle school seeking to break the cycle of poverty through an education that nourishes souls and ignites leaders for love and service.

Our 2020-21 Board of Directors Impact Report, Yes! Let's Go! captures the spirit of Seattle Nativity School—innovation, resilience, and creativity.