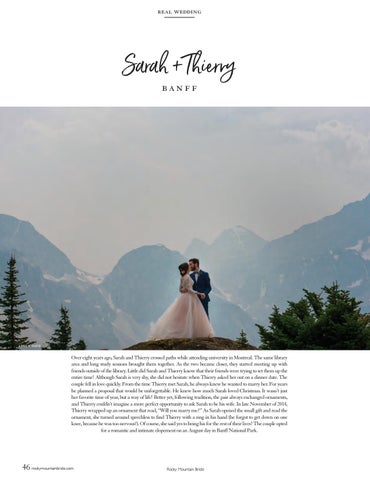 Over eight years ago, Sarah and Thierry crossed paths while attending university in Montreal. The same library area and long study sessions brought them together. As the two became closer, they started meeting up with friends outside of the library. Little did Sarah and Thierry know that their friends were trying to set them up the entire time! Although Sarah is very shy, she did not hesitate when Thierry asked her out on a dinner date. The couple fell in love quickly. From the time Thierry met Sarah, he always knew he wanted to marry her. For years he planned a proposal that would be unforgettable. He knew how much Sarah loved Christmas. It wasn’t just her favorite time of year, but a way of life! Better yet, following tradition, the pair always exchanged ornaments, and Thierry couldn’t imagine a more perfect opportunity to ask Sarah to be his wife. In late November of 2014, Thierry wrapped up an ornament that read, “Will you marry me?” As Sarah opened the small gift and read the ornament, she turned around speechless to find Thierry with a ring in his hand (he forgot to get down on one knee, because he was too nervous!). Of course, she said yes to being his for the rest of their lives! The couple opted for a romantic and intimate elopement on an August day in Banff National Park.