eXplore Brown County in the trees 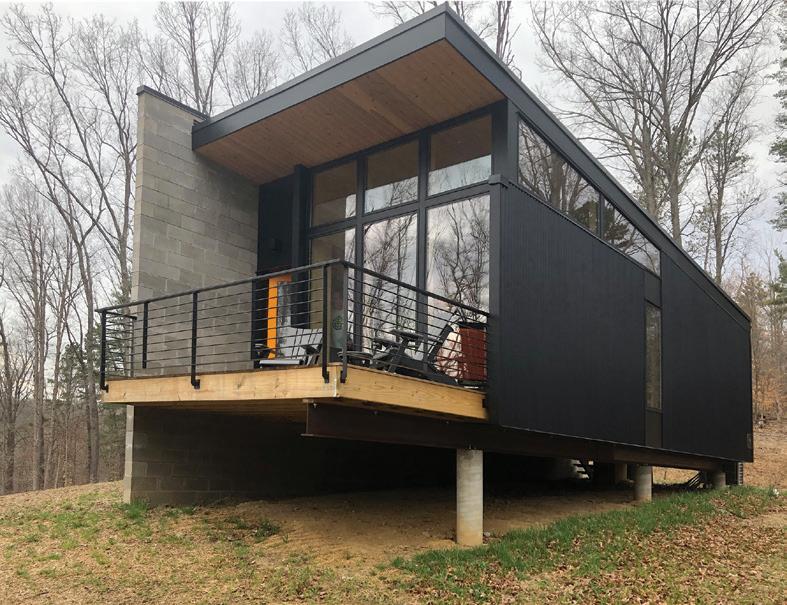 From zipping, Superman-style, through a lush tree canopy, to ripping your handlebars through hairpin turns on a dirt path, or relaxing at a crackling campfire, eXplore Brown County offers a surprising variety of activities that can hasten your heartbeat or soothe your soul.

The 1,000-acre site, about three miles south of State Road 46 east of Gnaw Bone, includes rustic cabins, a campground for tents and recreational vehicles, and a 165-seat hall for celebrations such as weddings, family reunions, and music festivals. Visitors from all parts of Indiana stop by for day trips or short stays, while longer-term guests hail from Louisville, Cincinnati, and Chicago, all of whom mingle with resident dogs Luke and Barney, who roam the property in search of belly rubs.

Retired engineer Gary Bartels launched the camp 22 years ago, without a business plan, but with lots of ideas, technical know-how, and a good dose of moxie.

“There was nothing here when I started,” he said recently as he stood on a gravel road, scanning his surroundings to see if guests needed his help.

Bartels said he worked for Columbus-based Arvin Inc. for 10 years as a prototype engineer but left the light automotive supplier right after its merger with Troy, Michigan-based Meritor Automotive.

The family had inherited the property, and Bartels had ideas for an adventure retreat, though his wife, Patricia, who taught art at Brown County Junior High School, didn’t relish the idea of razing his Arvin retirement fund to build a zip line.

“She thought I was nuts,” Bartels said with a laugh.

But his efforts and ingenuity have paid off: Ziplining now accounts for 40% of the camp’s revenue, far ahead of any other activity.

Zipline tours start at $25 and last at least 45 minutes but can take more than 2.5 hours and include rappelling and a free fall to a landing mat.

People who want to feel the brush of fresh air and see the burst of color in the Brown County hills meet at a cabin where they gear up before they’re driven to the jumping off points.

Camp guest Kristopher Tate, 43, of Zionsville, recently rented a cabin at the camp with his wife and two kids. The whole family thoroughly enjoyed its zip tour. Even Tate, though he said he is afraid of heights. “It was a blast,” he said.

The zip tours run even during the winter, so long as temperatures exceed 25 degrees Fahrenheit, though Bartels said spring and fall are the busiest zipping seasons. For an interesting twist, the camp offers zip tours at night, with the canopy illuminated only by headlamps, tiki torches, and moonlight.

Tate visited Brown County for a spring break getaway. He thought about driving to Nashville, Tennessee, but settled on Brown County in part because of its proximity. “Feels like you are in a different place,” he said. The family brought hot dogs, hamburgers, and other food, and Tate said he enjoyed the change of pace from cookouts to riding all-terrain vehicles through the hills of Brown County.

On a recent sunny afternoon, Bartels advised some visitors on good eateries in the area before he struck up a conversation with a guest who was staying with his family in one of the camp’s cabins.

Bartels’ prior career has come in handy for many parts of the camp. For example, he designed, built, and installed much of the zipline system himself. He even designed and installed a proprietary breaking system. He estimates that rebuilding the same zipline course elsewhere would cost more than $1 million.

He’s proud of what he has built, but also careful to make sure it remains in working order. He has the system inspected by a third party every December. The inspector’s report goes to Bartels’ insurance company.

Bartels recently turned 70 and keeps threatening to cut back on his hours, but still visits the camp just about every day.

“I enjoy coming to work,” he said.

His presence also is needed, though, in part because of a pandemic-induced labor shortage. The park shut down for about three months last year, and Bartels said that prompted some guides to leave. He said he’s trying to expand his 18-member staff. He said prospective employees must be fit, friendly, and not afraid of heights. Bartels said he can teach anything but personality.

The work is seasonal, and many employees work parttime. Some have day jobs and just work at the camp on the weekend, to do something fun, he said.

Bartels has added lots of activities over the last 22 years, including mountain biking, paintball, and arrow tag—a blend of dodgeball, paintball and laser tag, in which helmeted participants shoot rubber-tipped arrows that don’t leave any bruises.

Bartels said that he thinks he’s done with the camp expansions. He said that when he eventually steps down from his leadership role, his sons will be involved in management, but they have their own careers—one is a dentist, the other a pilot and flight instructor—so they’ll probably hire someone to run the place.

Meanwhile, you can expect to see Bartels striding through the camp to provide guests with directions, tell them stories about the camp’s beginnings, or offer advice on which of the zipline tours might be most suitable.

Even after more than two decades, Bartels said he still gains immense gratification from seeing people enjoy the camp’s activities.