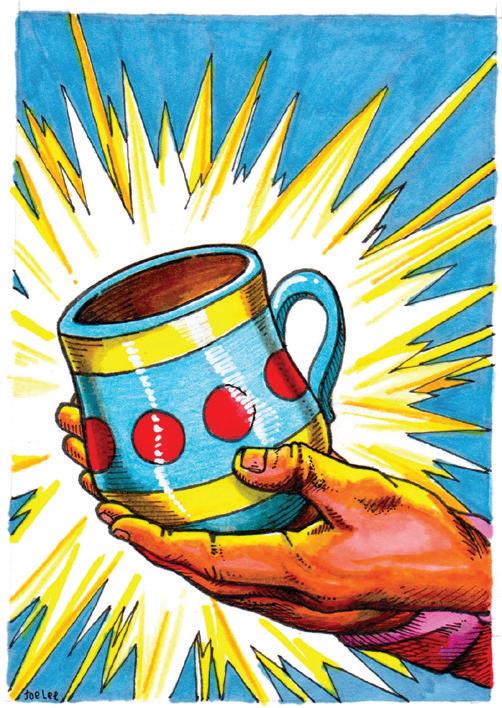 The Craft of Collecting Craft

Musicians. Ask their friends, family, and bartenders about them, and you’re likely to hear words like “creative” and “talented” and “brilliant.” Perhaps—meant in a good way—even “sensitive.” What you may not hear so often, though: “highly organized” or “financially solvent” or “super dependable.” (Full disclosure: I’m a musician myself. Which is why I’m allowed to say this about musicians.)

There are exceptions to the stereotype, of course. Such as Kenan Rainwater, thirty-nineyear-old owner and founder of Rainwater Studios, a creative hub east of Bean Blossom, specializing in live and recorded music. For many of Kenan’s peers, music begins and ends with their ability on an instrument or in their songwriting, and finding gigs. But he sees songs and performances as links in a bigger chain—a chain that secures and protects an entire local music culture. Through his experience, vision, and Brown County DNA, Kenan’s been forging that chain for years now, adding new links as opportunities arise. The result: a mini-empire encompassing music and video production, artist development, internet media, and live performance.

Kenan credits his deep roots in Brown County’s musical community with Rainwater Studios’ growth over the years. “I started playing with older guys in living rooms in my early twenties,” he recalls. Before long, he was playing at places like Muddy Boots and Big Woods in Nashville and putting together his own bands (Indiana Boys, Rainwater), negotiating with his brothers for use of the family’s four-car garage they used for working on cars. “Initially, I set it up so that we could convert easily between music rehearsal and automotive stuff,” he says.

Always on the lookout for ways to promote his musical projects, Kenan started recording his live shows and streaming video of rehearsals at the garage. “I’d been streaming the band [Rainwater] a little bit on my personal Facebook page, so I committed to streaming every Wednesday night, learning the ins and outs of doing that,” he explains. Sometimes he was joined by the “Swamping Crew,” a bunch of friends who “basically just did a bunch of experimental stuff” as he learned how to work in the internet medium by trial and error. His collection of video equipment grew with his skills, and soon Kenan had better-produced videos for the dedicated social media pages he’d set up for the studio that had taken shape in the garage. He began to follow an ambitious formula: think big; find the weak points in your process and overcome them; build relationships; and always, always persist.

He hasn’t looked back since. These days, there’s no more car repair in the garage (Sorry, brothers!): it’s a beautiful studio space now, complete with a sound stage and pro lighting. There, along with his partner Mandi Rogier, Kenan produces and hosts The Stream, Rainwater Studios’ live-in-studio streaming show featuring performances by three area artists a week. The studio also offers a full-service experience to clients looking to launch or sustain careers as performers.

Kenan being Kenan, though, that’s too few links in his chain. His master plan goes something like this: cultivate local talent through the studio’s services and booking on The Stream; put the best performances on regular compilation albums, released by the studio; assemble the artists from the albums into live showcase performances; record the showcases for future use; re-invest revenues into new studio gear, marketin, promotion, and the local music scene. Enjoy the Brown County culture you’ve helped create.

It’s worked out well so far, Kenan says. “We’re making good progress. The Playhouse show was a big encouragement, after a year of having no shows at all anywhere [because of the global pandemic].” After many months of doing what he could to keep the studio’s staff and guests safe on The Stream, Kenan was able to follow through to the next step. On March 20 of this year, the Brown County Playhouse hosted the Best of Stream Showcase Winter 2021, where Kenan was joined onstage by Matthew Marcelle, Steve Plessinger, Eric Hamblen, Michael Moulder, Jason Blankenship, Lexi Len, Wes Eberhardt, and Tay Bronson.

The show, a welcome evening out for a restriction-weary community where the arts are its lifeblood, was a hit for audience and performers alike. After two “writers in the round” sets, all the artists got together to play a cover of “Black Wind,” a song by local favorites the Cox Brothers. Among the show’s other highlights, Kenan says, were Michael Moulder’s songs and Steve Plessinger’s “Coal Mine.”

Kenan plans to keep the Showcases coming. The next two are in the works, tentatively scheduled for July 17 and November 7 at the Playhouse. He’s also got his sights set on approaching the Brown County Music Center about other shows in the future. But despite his supersized confidence and natural talent for thinking big, Kenan’s still Brown County through and through. “I’ve been to enough places to realize that they’re great to visit, but it’s nice to come home,” he says. “I like the things I get to do here, I like the streams, the hills, the people. I like the rural feel of it. I like the change of seasons.” He even chops the firewood he burns to heat the studio and his home, he tells me. Note to Kenan, if you’re reading this: the more fingers you have, the easier the knobs in the studio are to turn.