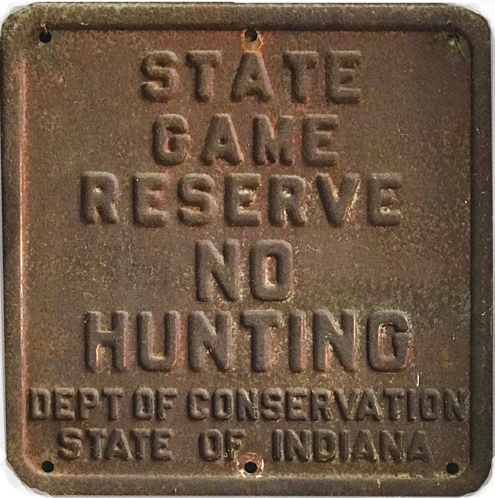 Both of my parents were born at the tail end of large families, so when I was growing up I had scads of aunts and uncles on both sides.

Uncle Bud was the oldest of Mammy’s 12 children, and after her husband, my grandfather, Robert Jordan “Jerd” Arnold died at the age of 56 in 1931, it was Bud that moved the family from northern Alabama to Brown County.

You may have been driving down Spearsville road and seen a handmade sign proclaiming that you are passing through “Arnoldville.” This is where all of those Arnolds come from.

We speculate that Uncle Bud had an economic survival plan, to move the family north so that all of the older boys could find work in industrial jobs in Indianapolis. But there was no way he was going to get Mammy to move out of “The Holler,” ensconced in the beautiful foothills of the Appalachians and to a big northern city.

He must have struck upon Brown County because the hilly terrain somewhat resembled those fondly-remembered mountains of northeastern Alabama. Also, land was dirt cheap.

So the older boys worked in factories and workshops in Indianapolis and the unmarried girls and younger children lived in Brown County.

Maybe it was a sign of their generation, or a sign of the times, but the women in the family all appear to have been good and sweet and nice on the order of everyday saintliness, but the men were all wheeler-dealers, hellraisers and—well, let’s just say they were “colorful.”

We have an old newspaper clipping describing the escapades and eventual arrest of two of my uncles after they made a wrong turn on to a railroad track, and apparently drove several miles before they discovered their mistake, which is what made the item newsworthy. Alcohol may have been involved.

Uncle Bud had a plating shop in Indy, electroplating chrome bumpers and so forth. This was back in the day, a long time before OSHA, the EPA or, really, common sense. At some point Uncle Hugh put the wrong chemical in the vat where the items were dipped, and everybody was lucky to escape the building before the ensuing explosion. I’ll bet there’s a clipping about that one, too.

Uncle Will had a framed newspaper clipping on his wall from the front page of the Indianapolis Star. It is a photo of the state capitol dome, showing a man suspended by a rope, sitting on a board, painting the dome with a brush. An inset close-up shows the man, Uncle Will, dangling from the board and painting away. The caption read: “That little dot…” (in the big picture) “is this.” (inset picture of uncle Will).

Uncle Cam was on a bomber crew in World War Two and they got shot down over occupied France. He was picked up by the resistance underground, and spent the rest of the war hidden away in the attic of a chateau, sampling the local vintages.

After a somewhat wild teenage and young adulthood, in keeping with his brothers, Uncle Curly (Clarence) Arnold became a preacher and a school teacher. I actually had him as a teacher in the sixth grade when he was teaching at Sprunica Elementary.

Uncle Curly just kept banging away until he eventually got a master’s degree in education. That’s a long way from Eureka, Alabama.

Although my Tryon uncles weren’t nearly as colorful as my Arnold uncles, they were still an interesting lot.

They grew up here in Brown County, mainly up around Peoga and Spearsville and north of there in a place they always called “possum holler,” but which historical research has revealed was actually named “Blossom Hollow.”

Uncle Edward was my father’s fraternal twin, and while they weren’t identical, they of course bore a strong resemblance to one another. Uncle Edward was first born and was like a bigger, more vital, more adventurous version of my father. Dad was the intellectual one, the smart talker. Garnet Parsley told me once, “Edwin would start the fights and Edward would finish them.”

Uncle Edward had a big white horse and when I was little he would put me up in the saddle and then make the horse rear up like the Lone Ranger. This seems like it would be fun, but is in fact terrifying to a five year old.

Uncle Edward did important work in the invention of the automated change machine, back when it was entirely mechanical. He once saved his family when their house burned down in the middle of the night.

He and Uncle Bob rode motorcycles, big Harley Davidsons, and they would come roaring down to our house where there was a simmering debate between my older brother and father about the relative safety and sanity as well as the political implications of motorcycle riding. But he couldn’t say that stuff to his big brothers.

Uncle Bob had been a wing walker. He earned enough flying hours to qualify for his pilot’s license in exchange for being the number two in a barnstorming act, a job entailed walking out on the wing of an old biplane as it zoomed around to thrill and amaze the locals.

He also worked as a “Hell Driver,” driving souped-up cars around a figure-eight track, jumping over ramps and through flaming walls and so forth, again, for the amusement of the locals.

Uncle Bob was also one of the first long-haul truckers, driving some of the first freight trucks cross-country before power steering or the modern highway system.

Uncle Elmer saved many family artifacts that no one cared about or remembered to keep track of, including my grandfather’s fiddle.

Each one of these could take up a story of their own with all of their exploits and adventures. They made my childhood in Brown County a lot more colorful.

Not to mention all of my amazing aunts. But we will have to save that for another time.