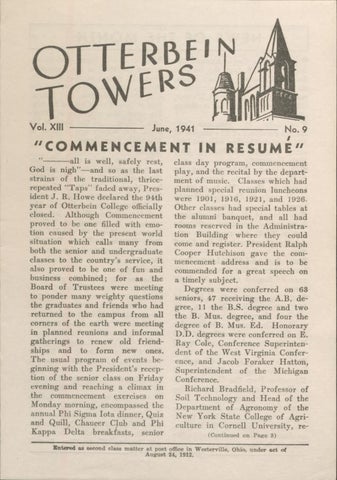 &quot;COMMENCEMENT IN RESUME&quot; “---------- ali is well^ safely rest, God is nigh&#39;’—and so as the last strains of the traditional, thricerepeated “Taps” faded away, Pres­ ident J. R. Howe declared the 94th year of Otterbein College officially closed. Although Commencement proved to be one filled with emo­ tion caused by the present world situation which calls many from both the senior and undergraduate classes to the country’s service, it also proved to be one of fun and business combined; for as the Board of Trustees were meeting to ponder many weighty questions the graduates and friends who had returned to the campus from all corners of the earth were meeting in planned reunions and informal gatherings to renew old friend­ ships and to form new ones. The usual program of events be­ ginning with the President’s recep­ tion of the senior class on Friday evening and reaching a climax in the commencement exercises on Monday morning, encompassed the annual Phi Sigma Iota dinner, Quiz and Quill, Chaucer Club and Phi Kappa Delta breakfasts, senior

class day program, commencement play, and the recital by the depart­ ment of music. Classes which had planned special reunion luncheons were 1901, 1916, 1921, and 1926. Other classes had special tables at the alumni banquet, and all had rooms reserved in the Administra­ tion Building wliere they could come and register. President Ralph Cooper Hutchison gave the com­ mencement address and is to be commended for a great speech on a timely subject. Degrees were conferred on 63 seniors, 47 receiving the A.B. de­ gree, 11 the B.S. degree and two the B. Mus. degree, and four the degree of B. Mus. Ed. Honorary D.D. degrees were conferred on E. Ray Cole, Conference Superinten­ dent of the West Virginia Confer­ ence, and Jacob Foraker Hatton, Superintendent of the Michigan Conference. Richard Bradfield, Professor of Soil Technology and Head of the Department of Agronomy of the New York State College of Agri­ culture in Cornell University, re(Continued on Page 3)

NEWS OF THE MONTH •’40 Alberta Engle received the degree of B.L.S. from the Western Reserve University Library School on June 16. She has accepted a position in the library at Medina, Ohio, where she will be in charge of children’s work. •’39 John V. Flanagan was elected president of Eta chapter of Phi Lambda Upsilon, national hon­ orary chemical fraternity, Ohio State University. •’37 Duane Mills received the M.D. degree from Temple Uni­ versity in May. He is to intern at Harrisburg Hospital, Harris­ burg, Pa. •’30 Mr. H. M. Ervin, who was

formerly radio engineer with radio station WLW, has received a com­ mission of ensign in Balbo, Canal Zone. •’29 Rev. and Mrs. Lewis Frees have taken Collin Cramp, a tenyear old English refugee, into their home. •’17 The tragic death of Mr. and Mrs. Charles Merrill in an auto accident three years ago was re­ cently called to our attention for the first time, and we thought that their friends and classmates would want to know of this. •’ll Charles Dennis Yates re­ ceived the degree of Doctor of Education from the University of Southern California School of Edu­ cation on May 28. •’06 We extend our deepest sym­ pathy to the family of Mary Baker who died in Seattle, Washing*ton, on June 4. She was buried in the Westerville cemetery.

•’76 It is with regret that we an­ nounce the death of the Honorable Frank D. Wilsey on May 27. Mr. Wilsey, who was vice-president and a member of the Board of Educa­ tion of New York City for twentyfive years, was a trustee of Otterbein College. At the time of his death Mr. Wilsey was residing in Montclair, New Jersey.

Brown_, *37, who was married to Marian Haag on June 14, and Charles Botts, *34, who was mar­ ried to Ruth Dreyer in Cincinnati on June 21. Other graduates who are an­ nouncing their marriages this month are George Bradshaw, *33, who was married to Irene Hall on May 27; Emerson Hillegas, *38, who was married to Marguerite Lewis several months ago; Helen Ludwick, ex*36, who became the bride of Dean Lawther, *34, at her home in Cincinnati on May 30; John Stevens Shank, ex’25, who married Mary Jane Routzong at Grace Methodist Church in Dayton on May 4; and Dee Jay Hummell, *37, who became the bride of Mar­ vin Schlesselman last June 29 in Cleveland. The couple have been living at Kelley*s Island, Ohio.

mittee, was the officjal announce­ ment of the election! of the new alumni officers. Special attractions of the banquet not had heretofore were the music by the violin quar­ tet and group singing, led by Bob Holmes, *35, during the dinner.

ceived the honorary degree of Doc­ tor of Science. Walter Gillan Clippinger, President-Emeritus of Otterbein College, received the de­ gree of Doctor of Humane Letters. Ralph Cooper Plutchison, Presi­ dent, Washington and Jefferson College, Washington, Pa., received the honorary degree of Doctor of Laws. The Spring Edition of the 1941 Quiz and Quill Magazine, with a special cover design by the Otter­ bein Craft Guild, may be had by sending thirty cents in stamps to the alumni office.

Alumni are ^ged to send items concerning their own activities and those of their friends to OTTERBEIN TOWERS. WesterviUc. Ohio