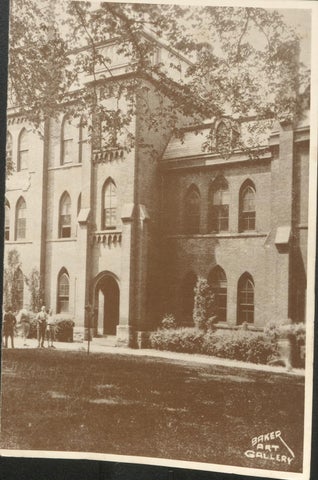 Published by the College

OTTERBEIN COLLEGE Otterbein was founded in 1817. She has rich heritage of traditions and a splendid educational background. She is well-seasoned with age and has developed careful and conservative standards of education and life. She holds to the polit\ of the piogiessi\e liberal arts college. However, in many de­ partments, oppoitunity is given for a moderate amount of specializa­ tion. The curriculum is arranged for pre-theological, pre-medical, preeducational and pre-law courses. Otterbein is centrally located, easily accessible by railway, bus and street car, only twelve miles from Columbus on Three C’s High­ way, in the Village of Westerville. Otterbein College is recognized by the following standardizing agencies: North Central Association of Colleges Ohio College Association Association of American Colleges State Department of F.ducation State University United Brethren Board of Education Approxed list of Association of American Universities.

CURRICULUM The curriculum of Otterbein College is broad and varied. It is strictly liberal arts and yet offers in the field of teacher training, music and business administration certain opportunities for specializa­ tion which lead directly into the vocations. Following is a list of departments of work in which courses of instruction are offered. Within each one is a number of special courses: Biblk Economics and Business Administration EdI CATION History Home Economics Language and Literature

SPECIAL FEATURES FOR MEN Football, basketball, track and baseball under the direction of trained men con­ stitute the varsity sports open to the men of the school. Intramural soccer, recreation ball, basketball and tennis are also sponsored by the department. King Hall offers a comfortable home to the men of the school. The Dining Hall is open to all men and accommodates nearly two hundred. The Men’s Glee Club has organized for the year and an itinerary has been planned for the spring months. The Varsity “0” Association is composed of honor men who by virtue of partici­ pation in the various intercollegiate athletics are elected to membership. The Men’s Varsity Debate Squad gives fine opportunity to those interested in public speaking and also leads to membership in Pi Kappa Delta, national honorary forensic fraternity. Philomathea and Philophronea are the literary societies for the men. They offer an unusual training in literary and expressional activities. The Young Men’s Christian Association fills an important place on the Campus. It brings to the college men a world viewpoint and attempts to make vital religion on the campus. The Men’s Senate and the King Hall Board are the executive councils which determine matters of government among the men.

SPECIAL FEATURES FOR WOMEN Cochran Hall. Saum Hall and Cottages adjoining the Campus provide homes for all college women. The Dining Room in Cochran Hall is open to all the women of the school. A graduate nurse ministers to the physical needs of the young women of the school. A Girls’ Glee Club has been organized under the direction of Professor Spessard with a personnel of thirty. Concerts will be given in the spring. The Women’s Athletic Association, affiliated with the national oragnization, spon­ sors a number of intramural games and field sports throughout the year. A full-time Director of Physical Education is in charge of the work for women. The department offers a minor in Physical Education and is plan­ ning to make possible a major witbin a year. The college has a well-organized Department of Home Economics which sponsors the Home Economics Club, which club is affiliated with the national or­ ganization. The Girls’ Varsity Debate Squad affords an opportunity for those interested in public speaking and also leads to membership in Pi Kappa Delta, national honorary forensic fraternity. Philalethea and Cleiorhetea. literary societies for women, afford an unusual opportunity for college women in the development of musical and literary ability as well as in general culture and poise. The Young Women’s Christian Association makes possible the sharing of experi­ ences among the girls and leads to a richer spiritual life and a finer apprecia­ tion of the possibilities of life. The life of women in the dormitories is largely self-governing. The Women’s Senate and the Cochran Hall Board are the executive councils which deter­ mine matters of government among the women.

SPECIAL FEATURES FOR BOTH MEN AND WOMEN I’

Freshman Week, now a recognized part of the school program, introduces the freshmen to campus life and college traditions. A course in Orientation running through the first semester carries out this work more completely. A New Gymnasium on the Campus—ready for occupancy by the beginning of the fall term in September. A strong Education Department with three full-time professors makes possible a thorough training for students planning to teach. The department is fully accredited by the State Department of Education and other accre iting and standardizing agencies. Theta Alpha Phi, national lionorary dramatic fraternity, and Cap and local association, honors with membership both men and women w o met certain requirements in the writing and producing of plays.

The Otterbein College Orchestra, made up of men and women, gives ^ of concerts on the campus and throughout the country during The Quiz and Quill Club, honorary literary organization, honors with member­ ship those students showing ability in creative writing. The Tan and Cardinal, weekly college paper; and the Sibyl, offers opportunity for those interested in literaly an crea i

The Young People’s Deparlinenl of the Sunday School. The *'*'”**'|!" to Society, and the Life Work Recruit Association, offer encouragement those interested in Christian work and training. A number of departmental Clubs—Chaucer (English*. ^l*nh (Art)—--tend Relations (History). Science Club, Sociology Club. Apollo Club (Art to develop interest among the students in their major \^or '. The necessary expense at Otterbein is low—running fiom feature should be of real interest to those planning or co » Ollerhein Odiege is a Uniled Brelliren College, hul eighleen denominalions and fifteen .States and cuuntries are represented in her slm en Otterbein has a faculty of forty-live professors and instiuctors. ing endowment, are over two million dollars. The Campus acres and includes ten buildings.

A LETTER FROM THE PRESIDENT Westerville, Ohio. My Dear Young Friend:— Otterbein College extends to you the greetings of a new year—a year filled with opportunity and pleasure for every ambitious young person. The gateway to the college affords the best opportunity for personal development and service. A college in itself is no guarantee of success, but it makes success easier. There is no “royal road to learning.” Each one must carve his own career. There are no substitutes for energy, honesty, industry and studious habits. Cleanness of habits and purity of ideals are foundation stones for success anywhere in life. By the systematizing of learning and the upholding of these ideals of character the Christian College comes to the aid of young people with purpose and enterprise. It is the means by which the public expresses its confidence in ambitious young men and women. Otterbein College has stood the test of eighty-one years of service. She has made her impress upon thousands. Many of them have rendered distinguished service to society. We invite you to join this family of intellectual and moral leaders. These are the days when you are planning your college career. Let us help you do it. Many important questions will arise. The size of the college, its location, its educational stand­ ards and social ideals, its equipment and its teaching staff—all are important to the young student. Read the accompanying pages and if your questions are not answered, write to us or send for catalog. Yours for good success,

(Some of the seventy-five or more young men and women who are planning for full-time Christian Service.) Detach and mail to Ottekhein College, Westerville, Ohio

I am interested in attending O'liEiuiEi.N. literature. Send also to

Send me a catalog and other