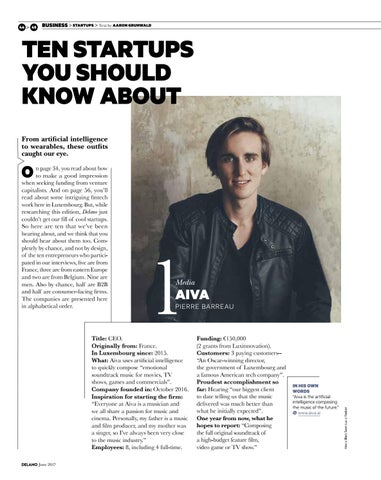 TEN STARTUPS YOU SHOULD KNOW ABOUT From artificial intelligence to wearables, these outfits caught our eye.

Title: CEO. Originally from: France. In Luxembourg since: 2015. What: Aiva uses artificial intelligence to quickly compose “emotional soundtrack music for movies, TV shows, games and commercials”. Company founded in: October 2016. Inspiration for starting the firm: “Everyone at Aiva is a musician and we all share a passion for music and cinema. Personally, my father is a music and film producer, and my mother was a singer, so I’ve always been very close to the music industry.” Employees: 8, including 4 full-time. June 2017

Funding: €150,000 (2 grants from Luxinnovation). Customers: 3 paying customers-“An Oscar-winning director, the government of Luxembourg and a famous American tech company”. Proudest accomplishment so far: Hearing “our biggest client to date telling us that the music delivered was much better than what he initially expected”. One year from now, what he hopes to report: “Composing the full original soundtrack of a high-budget feature film, video game or TV show.”

IN HIS OWN WORDS “Aiva is the artificial intelligence composing the music of the future.” icon_website www.aiva.ai

n page 34, you read about how to make a good impression when seeking funding from venture capitalists. And on page 56, you’ll read about some intriguing fintech work here in Luxembourg. But, while researching this edition, Delano just couldn’t get our fill of cool startups. So here are ten that we’ve been hearing about, and we think that you should hear about them too. Completely by chance, and not by design, of the ten entrepreneurs who partici­ pated in our interviews, five are from France, three are from eastern Europe and two are from Belgium. Nine are men. Also by chance, half are B2B and half are consumer-facing firms. The companies are presented here in alphabetical order.