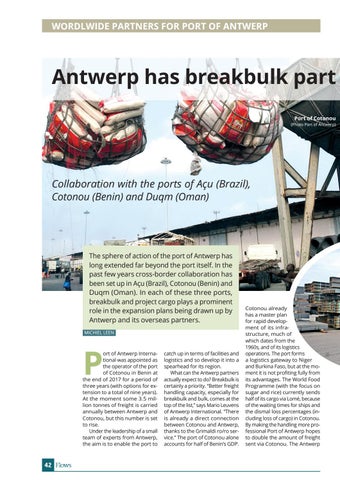 WORDLWIDE PARTNERS FOR PORT OF ANTWERP

Collaboration with the ports of Açu (Brazil), Cotonou (Benin) and Duqm (Oman)

The sphere of action of the port of Antwerp has long extended far beyond the port itself. In the past few years cross-border collaboration has been set up in Açu (Brazil), Cotonou (Benin) and Duqm (Oman). In each of these three ports, breakbulk and project cargo plays a prominent role in the expansion plans being drawn up by Antwerp and its overseas partners. MICHIEL LEEN

ort of Antwerp International was appointed as the operator of the port of Cotonou in Benin at the end of 2017 for a period of three years (with options for extension to a total of nine years). At the moment some 3.5 million tonnes of freight is carried annually between Antwerp and Cotonou, but this number is set to rise. Under the leadership of a small team of experts from Antwerp, the aim is to enable the port to

catch up in terms of facilities and logistics and so develop it into a spearhead for its region. What can the Antwerp partners actually expect to do? Breakbulk is certainly a priority. “Better freight handling capacity, especially for breakbulk and bulk, comes at the top of the list,” says Mario Leuvens of Antwerp International. “There is already a direct connection between Cotonou and Antwerp, thanks to the Grimaldi ro/ro service.” The port of Cotonou alone accounts for half of Benin’s GDP.

Cotonou already has a master plan for rapid development of its infrastructure, much of which dates from the 1960s, and of its logistics operations. The port forms a logistics gateway to Niger and Burkina Faso, but at the moment it is not profiting fully from its advantages. The World Food Programme (with the focus on sugar and rice) currently sends half of its cargo via Lomé, because of the waiting times for ships and the dismal loss percentages (including loss of cargo) in Cotonou. By making the handling more professional Port of Antwerp hopes to double the amount of freight sent via Cotonou. The Antwerp 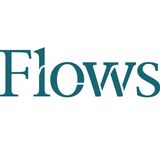