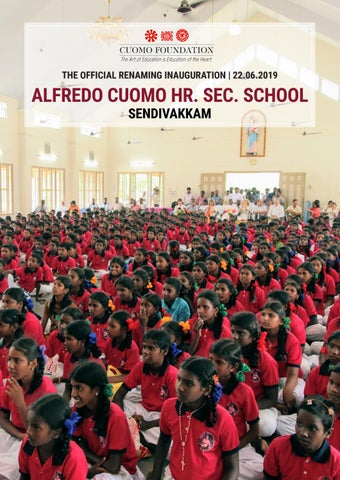 His Excellence, Dear Ladies and Gentlemen Coming back to Sendivakkam is always moving for me, as it brings back a lot of memories. Sendivakkam has a long standing history with helping and educating those in need. Already in 1920, the Catholic Christian Community was present. We only came in 2006 for the first time, with my late husband, Alfredo Cuomo, and since then, never did we stop coming. The Foundation was not yet an organization, as it is today. Times were different, everything seemed easier and mostly based upon good will. I can recall there was a field with cows wandering. It was difficult to imagine that a school, such as Sendivakkam, could come out from nowhere, in this peaceful and wild place.

Fortunately, we met His Excellency, who has helped us and made all possible. I can recall a young priest, Father Anthony, and I can figure the long way he has gone through, when I saw him last month in Rome for his thesis. Unfortunately, Alfredo passed away some 10 years ago, without seeing all what he had fancied, before it came true. Many schools, hundreds of students, the scholarships and all of it for these young people whom have been given the opportunity to study and thereby improve their lives. We are all proud of such achievments. I am sure that my late husband, from where he is can see all of it. I am sure that he feels rewarded and proud to have a school named after him. He has given passion, time and money, and shown us the way to go. ÂŤ Where there is a will, there is a way Âť, we have followed with our will the same way he showed us all. I wish to thank all of you for this celebration, as his name will remain for ever attached to Education, to children, to those in need despite that we are in this place so far away from home. Education cannot be bought, Education remains when everything else is gone, Education acts as a wall against violence, racism and intolerance. Nothing could be a better reward than naming a school Alfredo Cuomo. I want to thank all of you for this achievment. I hope that these schools will help many generations to come, to grow educated and be prepared for this wild world. Maria Elena Cuomo President - Cuomo Foundation 22.06.2019

The Cuomo Foundation representatives, presided by Alfredo Cuomo, inspecting the site of the future school compound - 2003

Cattle wandering in the fields, soon to be tranformed into a purpose-built educational complex - 2003

The Cuomo Foundation has operated in Tamil Nadu, the southern state of India, for 20 years. In the beginning, its simple mission was to create concrete opportunities and support access to education for disadvantaged children.

Sendivakkam is a rural village set in the district of Kancheepuram in Tamil Nadu. It currently has a population of just over 800. The village was established in 1920 as a Christian community overseen originally by the diocese of Pondicherry. Its inhabitants were seen as ‘people of outcaste’ by the strict caste structure of the day. The landlords and the upper castes kept them ‘in servitude’ through the socio-economic, political and cultural climate prevalent then. Landless, they struggled for a meagre existence. For nearly 80 years, the only education available in the village was provided by the RC Middle—a primary age school. The children’s learning within the community was basic and severely restricted as there was no means or access to further higher education without travelling. In 1999, a small centre was created by the Parish to enable children to attain 10th standard academic level.

The Cuomo Foundation, working closely with the local authorities, parish and community agreed to establish an educational compound fit for purpose and in early 2005 the R.C. Higher Secondary School was opened in Sendivakkam.

In 2006, separate dormitories were built for girls and boys enabling children from surrounding villages to participate and also gain from higher educational standards.

The action of providing access to education in an appropriate environment continues to have an enormous positive impact on the local community and the surrounding villages as parents enrol their children from further afield. The school is administered by the church and provides a multi-faith education to Hindus, Muslims and Christians, irrespective of caste.

Boarding Home for Boys, built in 2006 next to the RC Higher Secondary School, Sendivakkam

The daily running and maintenance costs of the school, its staff and its boarders and carers continues to be overwhelmingly funded by the Cuomo Foundation. Although the government supports the ‘minorities guaranteed right to education’, the ‘minority institution’ Order of 1991 declared that the government would not grant any further financial assistance to non-governmental schools in future years.

In 2007, the Alfredo Cuomo Scholarships was established in Sendivakkam in order to support selected students to continue their chosen studies in colleges and universities. To date, over 120 young women and men have been financially assisted. Since 2005, the school has educated successfully thousands of children and many have been enabled to develop and establish careers in various sectors such as Administration, Architecture, Banking, Engineering, Government, IT, Medicine, Ministries of the Church, Music, Paramilitary, Police and Social Work.

In 2013, in recognition of the ongoing commitment and history of the Foundation in that region, the Church authorities renamed the school, the Alfredo Cuomo Higher Secondary School.

In 2019, the government ministry of education officially recognised the name change and legally registered the school as the Alfredo Cuomo Hr. Sec. School.

A BRIEF HISTORY OF THE PROJECT BY K. CHARLES Project Manager, India

History of Sendivakkam Village traces from 1920 as a Catholic Christian Community being a unit of Pondicherry Diocese. Then priests evangelized among the people who were ejected from the caste based structure defining them ‘people of outcaste’. The Community was a substation of Cheyyur Parish, then shifted to Madurantakam and to Elapakkam finally to Acharapakam parish. Recently in the year 2006 the Parish is elevated to be an independent parish. Till then, R.C. Middle school was the only sole Educational institution to cater the needs of the Children. Then socio-economic cultural, psychological, occupation and political situation kept them beneath the hands of the landlords and caste hindus. Landless Catholic Christian community struggled a lot for their livelihood except toiling in the field of the landlords. However without losing their faith they lead a witnessing life. As fruit of their Faith in the year 1999 a small home for children was started to comfort the needy children to educate them upto 10th std. Christians’ faith yielded the fruits in multiple when the Cuomo Foundation stepped down to support with the massive structure for educational institutions and home for children and the aged persons in the year 2006. Since the moment of the collaboration till date the Cuomo Foundation has made remarkable changes and created an impact amidst the children and the backward areas in the educational field. This school being the only source of higher education accommodates children of all background irrespective of caste, religion and language etc. Thus Alfredo Cuomo Higher Secondary School has educated thousands of students who now excel in different walks of life like Medicine, Music, Administrative Studies, Police, Revenue and Para- Military, IT Field, Social Work, Priestly Ministry, Nunhood and in the Politics of the Nation. Since this institution comes under the Minority institution, the Government has not provided any financial assistance to the school. Thus Cuomo Foundation has taken all the responsibility to provide financial and material assistance to the students such as teachers’ salary, maintenance for the boarders both girls and boys and the required buildings for the school. This school also provides hostel facilities for the poor boys and girls who come from far places. They are given food and shelter by the Foundation.

Alfredo Cuomo Scholarships Cuomo Foundation has contributed and changed the economical status of the downtrodden people by giving a helping hand to the first generation of students in Sendivakkam through scholarships. Scholarship program came into effect in the year 2007 in Sendivakkam and till now the Foundation has helped more than 122 students to continue their college studies. More than 92 students completed their graduation until now and they are into various employments such as nurses in the hospitals, employees in IT companies, some have become Architects and Engineers. One of the highlights of these beneficiaries is that Mrs. Motcharani who studied in this school has become teacher of the school. She is now working as a teacher in this school. It was a great achievement in the journey of the Foundation. By giving education to the poor students their families have come back to this beautiful village and get settled. Before the school was constructed, people used to go to nearby cities for their day to day life as well as for the education of the children but now everything has changed. The village people lead a happy life due to the arrival of the Foundation school in Sendivakkam. People and the headquarters of the diocese of Chingleput of their own love and affection, the name of the school was changed into â&amp;#x20AC;&amp;#x153;Alfredo Cuomo Higher Secondary Schoolâ&amp;#x20AC;? which was formerly known as R.C. Higher Secondary School. 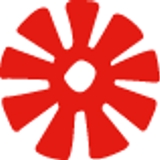