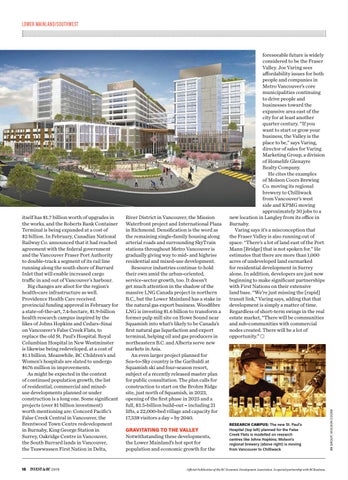 River District in Vancouver, the Mission Waterfront project and International Plaza in Richmond. Densification is the word as the remaining single-family housing along arterial roads and surrounding SkyTrain stations throughout Metro Vancouver is gradually giving way to mid- and highrise residential and mixed-use development. Resource industries continue to hold their own amid the urban-oriented, service-sector growth, too. It doesn’t get much attention in the shadow of the massive LNG Canada project in northern B.C., but the Lower Mainland has a stake in the natural gas export business. Woodfibre LNG is investing $1.6 billion to transform a former pulp mill site on Howe Sound near Squamish into what’s likely to be Canada’s first natural gas liquefaction and export terminal, helping oil and gas producers in northeastern B.C. and Alberta serve new markets in Asia. An even larger project planned for Sea-to-Sky country is the Garibaldi at Squamish ski and four-season resort, subject of a recently released master plan for public consultation. The plan calls for construction to start on the Brohm Ridge site, just north of Squamish, in 2023, opening of the first phase in 2025 and a full, $3.5-billion build-out – including 21 lifts, a 22,000-bed village and capacity for 17,538 visitors a day – by 2040. GRAVITATING TO THE VALLEY Notwithstanding these developments, the Lower Mainland’s hot spot for population and economic growth for the

itself has $1.7 billion worth of upgrades in the works, and the Roberts Bank Container Terminal is being expanded at a cost of $2 billion. In February, Canadian National Railway Co. announced that it had reached agreement with the federal government and the Vancouver Fraser Port Authority to double-track a segment of its rail line running along the south shore of Burrard Inlet that will enable increased cargo traffic in and out of Vancouver&#39;s harbour. Big changes are afoot for the region’s health-care infrastructure as well. Providence Health Care received provincial funding approval in February for a state-of-the-art, 7.4-hectare, $1.9-billion health research campus inspired by the likes of Johns Hopkins and Cedars-Sinai on Vancouver’s False Creek Flats, to replace the old St. Paul’s Hospital. Royal Columbian Hospital in New Westminster is likewise being redeveloped, at a cost of $1.1 billion. Meanwhile, BC Children’s and Women’s hospitals are slated to undergo $676 million in improvements. As might be expected in the context of continued population growth, the list of residential, commercial and mixeduse developments planned or under construction is a long one. Some significant projects (over $1 billion investment) worth mentioning are: Concord Pacific’s False Creek Central in Vancouver, the Brentwood Town Centre redevelopment in Burnaby, King George Station in Surrey, Oakridge Centre in Vancouver, the South Burrard lands in Vancouver, the Tsawwassen First Nation in Delta,

foreseeable future is widely considered to be the Fraser Valley. Joe Varing sees affordability issues for both people and companies in Metro Vancouver’s core municipalities continuing to drive people and businesses toward the expansive area east of the city for at least another quarter century. “If you want to start or grow your business, the Valley is the place to be,” says Varing, director of sales for Varing Marketing Group, a division of Homelife Glenayre Realty Company. He cites the examples of Molson Coors Brewing Co. moving its regional brewery to Chilliwack from Vancouver’s west side and KPMG moving approximately 30 jobs to a new location in Langley from its office in Burnaby. Varing says it’s a misconception that the Fraser Valley is also running out of space: “There’s a lot of land east of the Port Mann [Bridge] that is not spoken for.” He estimates that there are more than 1,000 acres of undeveloped land earmarked for residential development in Surrey alone. In addition, developers are just now beginning to make significant partnerships with First Nations on their extensive land base. “We’re just missing the [rapid] transit link,” Varing says, adding that that development is simply a matter of time. Regardless of short-term swings in the real estate market, “There will be communities and sub-communities with commercial nodes created. There will be a lot of opportunity.” •

Official Publication of the BC Economic Development Association. In special partnership with BCBusiness.

Brought to you by the BCEDA and BCBusiness Magazine, Invest in BC is your guide to getting the most of out of a great Canadian province. With a diverse economy and boundless opportunity, British Columbia in the place to be! 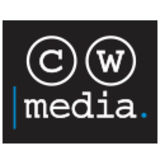