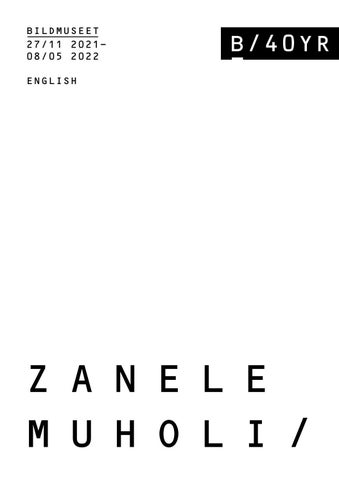 ‘My mission is to re-write a Black queer and trans visual history of South Africa for the world to know of our resistance and existence at the height of hate crimes in South Africa and beyond.’ Zanele Muholi

Zanele Muholi is one of the most acclaimed photographers working today. This exhibition charts Muholi’s emergence as an activist in the early 2000s to the present day. In beautiful and striking photographs, Muholi tells the stories of Black LGBTQIA+ (Lesbian, Gay, Bisexual, Transgender, Queer, Intersex, Agender, Asexual) lives in South Africa and beyond. Their work includes depictions of love and intimacy as well as intense portraits of people who risk their lives to live authentically despite oppression and discrimination. In the ongoing series Somnyama Ngonyama [Hail the Dark Lioness], Muholi turns the camera on themself. With references to family history and depiction of the Black body through the ages, the artist stages themself, over and over again. During the 1990s, South Africa underwent major social and political change. Apartheid was officially abolished in 1994. This was a political and social system of racial segregation underpinned by white minority rule. Anyone who was not classified as white was actively oppressed by the regime. Apartheid continued the segregation that had begun under the Dutch and British colonial regimes in the late 19th century. The apartheid regime also upheld injustice and discrimination based on gender and sexuality. While the 1996 Constitution of the Republic of South Africa was the first in the world to outlaw discrimination based on sexual orientation, the LGBTQIA+ community remains a target for prejudice, hate crimes and violence.

THEMES IN THE EXHIBITION

ONLY HALF THE PICTURE These works are from Muholi’s first series Only Half the Picture (2002–2006). It documents survivors of hate crimes living across South Africa and its townships. Under apartheid, townships were established as residential areas for those who had been evicted from places designated as ‘white only’. The people Muholi photographs – their participants – are presented with compassion, dignity and courage in the face of ongoing discrimination. The series also includes images of intimacy, expanding the narrative beyond victimhood. Muholi reveals the pain, love and defiance that exist within the Black LGBTQIA+ community in South Africa.

BEING These portraits are from Muholi’s series Being (2006–ongoing). They capture moments of intimacy between couples, as well as their daily life and routines. Muholi addresses the misconception that queer life is ‘unAfrican’, a falsehood emerging in part out of the belief that same-sex orientation was a colonial import to Africa. Each couple is shown in the private spaces they share. Muholi explains how ‘lovers and friends consented to participate in the project, willing to bare and express their love for each other.’ Commenting on this series they say, ‘my photography is never about lesbian nudity. It is about portraits of lesbians who happen to be in the nude.’ This series dismantles the white patriarchal gaze and rejects negative or heteronormative images, common in political and social systems that uphold heterosexuality as the norm or default sexual orientation.

The artist has commented, ‘Since slavery and colonialism, images of us African women have been used to reproduce heterosexuality and white patriarchy, and these systems of power have so organised our everyday lives that it is difficult to visualise ourselves as we actually are in our respective communities. Moreover, the images we see rely on binaries that were long prescribed for us (heterosexual/ homosexual, male/female, African/unAfrican). From birth on, we are taught to internalise their existences, sometimes forgetting that if bodies are connected, connecting, the sensuousness goes beyond simplistic understandings of gender and sexuality.’

QUEERING PUBLIC SPACE Photographing Black LGBTQIA+ participants in public spaces is an important part of Muholi’s visual activism. This series presents portraits of transgender women, gay men and gender non-conforming people photographed in public places. Several of the locations are important in the history of South Africa. Some images are taken at Constitutional Hill, the seat of the Constitutional Court of South Africa. It is a key place in relation to the country’s progression towards democracy. Other participants are photographed on beaches. These were segregated during apartheid. They are therefore potent symbols of how racial segregation affected every aspect of life. Participants are often shown on Durban Beach, close to Muholi’s birthplace of Umlazi.

Muholi states that ‘we’re ‘queering’ the space in order for us to access the space. We transition within the space in order to make sure that the Black trans bodies are part of this as well. We owe it to ourselves.‘ Muholi often chooses to photograph participants in colour, bringing the work closer to reality and rooting them in the present day.

BRAVE BEAUTIES Brave Beauties (2014–ongoing) is a series of portraits of trans women, gender non-conforming and non-binary people. Many of them are also beauty pageant contestants. Queer beauty pageants offer a space of resistance within the Black LGBTQIA+ community in South Africa. They are a place where individuals can realise and express their beauty outside heteronormative and white supremacist cultures. Muholi has commented that these participants ‘enter beauty pageants to change mind-sets in the communities they live in, the same communities where they are most likely to be harassed, or worse.’ This series is also inspired by fashion magazine covers. Muholi has questioned whether ‘South Africa as a democratic country would have an image of a trans woman on the cover of a magazine.’ These images aim to challenge queerphobic and transphobic stereotypes and stigmas. As with all of Muholi’s images, the portraits are created through a collaborative process. Muholi and the participant determine the location, clothing and pose together, focusing on producing images that are empowering for both the participant and the audience.

COLLECTIVITY Collectivity lies at the heart of Muholi’s work. Many of Muholi’s large network of collaborators are members of their collective, Inkanyiso. This means ‘light’ in isiZulu, Muholi’s first language and one of 11 official languages in South Africa. Inkanyiso’s mission is to ‘Produce, educate and disseminate information to many audiences, especially those who are often marginalised or sensationalised by the mainstream media.’ Queer Activism = Queer Media, is the collective’s motto. Self-organisation, mentorship and skill sharing are central to Muholi’s collaborative activity. This series features images that are collaboratively made. Whether documenting public events such as Pride marches and protests, or private events such as marriages and funerals, these images form an ever-expanding visual archive. By recording the existence of the Black LGBTQIA+ community, they resist erasure.

FACES AND PHASES Muholi began their ongoing series Faces and Phases in 2006. The project currently totals 500+ works. As a collective portrait, it celebrates, commemorates and archives the lives of Black lesbians, transgender and gender non-conforming individuals. ‘It is important to mark, map and preserve our mo(ve)ments through visual histories for reference and posterity so that future generations will note that we were here.’

Many of these portraits are the result of a long and sustained relationship and collaboration. Muholi often returns to photograph the same person over time. ‘Faces’ refers to the person being photographed. ‘Phases’ signifies a transition from one stage of sexuality or gender expression and identity to another. It also marks the changes in the participants‘ daily lives, including ageing, education, work experience and marriage. The gaps in the grid indicate individuals that are no longer present in the project, or a portrait yet to be taken. Faces and Phases forms a living archive that visualises Muholi’s belief that ‘we express our gendered, radicalised, and classed selves in rich and diverse ways.’

SHARING STORIES From their earliest days as an activist, Muholi sought to record first-hand testimonies and experiences of Black LGBTQIA+ people. Giving participants a platform to tell their own story, in their own words, has been an enduring goal. They have said, ‘each and every person in the photos has a story to tell but many of us come from spaces in which most Black people never had that opportunity. If they had it at all, their voices were told by other people. Nobody can tell our story better than ourselves.’ In this film, eight participants share stories of their lives and experiences as members of the LGBTQIA+ community in South Africa. Some of them feature in the Faces and Phases project. The interviews have been conducted and produced by Muholi’s

collaborators, some of whom are members of Inkanyiso. Some testimonies do not use Muholi’s preferred gender pronouns they, them, theirs.

SOMNYAMA NGONYAMA Somnyama Ngonyama (2012–ongoing) is a series in which Muholi turns the camera on themself to explore the politics of race and representation. The portraits are photographed in different locations around the world. They are made using materials and objects that Muholi sources from their surroundings. The images refer to personal reflections, colonial and apartheid histories of exclusion and displacement, as well as ongoing racism. They question acts of violence and harmful representations of Black people. Muholi’s aim is to draw out these histories in order to educate people about them and to facilitate the processing of these traumas both personally and collectively. Muholi considers how the gaze is constructed in their photographs. In some images they look away. In others they stare the camera down, asking what it means for ‘a Black person to look back’. When exhibited together the viewer is surrounded by a network of gazes. Muholi increases the contrast of the images in this series, which has the effect of darkening their skin tone. ‘I’m reclaiming my Blackness, which I feel is continuously performed by the privileged other.’

The titles of the works in the series remain in isiZulu, Muholi’s first language. This is part of their activism, taking ownership of and pride in their language and identity. It encourages a Western audience to understand and pronounce the names. This critiques what happened during colonialism and apartheid. Then, Black people were often given English names by their employers or teachers who refused to remember or pronounce their real names. Reproduced courtesy of Tate

IWO MYRIN / MEMORIES FROM THE TAIGA 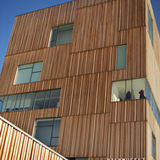