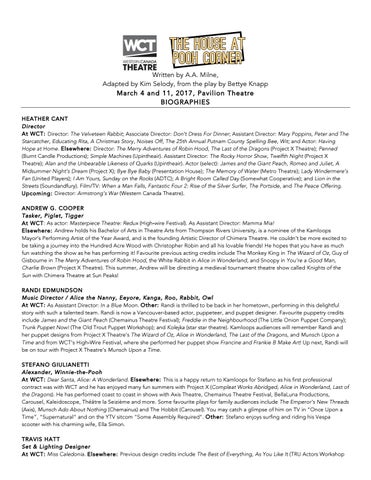 Written by A.A. Milne, Adapted by Kim Selody, from the play by Bettye Knapp M arch 4 and 11, 2017, Pavilion Theatre BIO GRAPHIES HEATHER CANT Director At WCT: Director: The Velveteen Rabbit; Associate Director: Don’t Dress For Dinner; Assistant Director: Mary Poppins, Peter and The Starcatcher, Educating Rita, A Christmas Story, Noises Off, The 25th Annual Putnam County Spelling Bee, Wit; and Actor: Having Hope at Home. Elsewhere: Director: The Merry Adventures of Robin Hood, The Last of the Dragons (Project X Theatre); Penned (Burnt Candle Productions); Simple Machines (Upintheair). Assistant Director: The Rocky Horror Show, Twelfth Night (Project X Theatre); Alan and the Unbearable Likeness of Quarks (Upintheair). Actor (select): James and the Giant Peach, Romeo and Juliet, A Midsummer Night’s Dream (Project X); Bye Bye Baby (Presentation House); The Memory of Water (Metro Theatre); Lady Windermere’s Fan (United Players); I Am Yours, Sunday on the Rocks (ADTC); A Bright Room Called Day (Somewhat Cooperative); and Lion in the Streets (Soundandfury). Film/TV: When a Man Falls, Fantastic Four 2: Rise of the Silver Surfer, The Portside, and The Peace Offering. Upcoming: Director: Armstrong’s War (Western Canada Theatre). ANDREW G. COOPER Tasker, Piglet, Tigger At WCT: As actor: Masterpiece Theatre: Redux (High-wire Festival). As Assistant Director: Mamma Mia! Elsewhere: Andrew holds his Bachelor of Arts in Theatre Arts from Thompson Rivers University, is a nominee of the Kamloops Mayor’s Performing Artist of the Year Award, and is the founding Artistic Director of Chimera Theatre. He couldn’t be more excited to be taking a journey into the Hundred Acre Wood with Christopher Robin and all his lovable friends! He hopes that you have as much fun watching the show as he has performing it! Favourite previous acting credits include The Monkey King in The Wizard of Oz, Guy of Gisbourne in The Merry Adventures of Robin Hood, the White Rabbit in Alice in Wonderland, and Snoopy in You’re a Good Man, Charlie Brown (Project X Theatre). This summer, Andrew will be directing a medieval tournament theatre show called Knights of the Sun with Chimera Theatre at Sun Peaks! RANDI EDMUNDSON Music Director / Alice the Nanny, Eeyore, Kanga, Roo, Rabbit, Owl At WCT: As Assistant Director: In a Blue Moon. Other: Randi is thrilled to be back in her hometown, performing in this delightful story with such a talented team. Randi is now a Vancouver-based actor, puppeteer, and puppet designer. Favourite puppetry credits include James and the Giant Peach (Chemainus Theatre Festival); Freddie in the Neighbourhood (The Little Onion Puppet Company); Trunk Puppet Now! (The Old Trout Puppet Workshop); and Kolejka (star star theatre). Kamloops audiences will remember Randi and her puppet designs from Project X Theatre’s The Wizard of Oz, Alice in Wonderland, The Last of the Dragons, and Munsch Upon a Time and from WCT’s High-Wire Festival, where she performed her puppet show Francine and Frankie B Make Art! Up next, Randi will be on tour with Project X Theatre’s Munsch Upon a Time. STEFANO GIULIANETTI Alexander, Winnie-the-Pooh At WCT: Dear Santa, Alice: A Wonderland. Elsewhere: This is a happy return to Kamloops for Stefano as his first professional contract was with WCT and he has enjoyed many fun summers with Project X (Compleat Works Abridged, Alice in Wonderland, Last of the Dragons). He has performed coast to coast in shows with Axis Theatre, Chemainus Theatre Festival, BellaLuna Productions, Carousel, Kaleidoscope, Théâtre la Seizième and more. Some favourite plays for family audiences include The Emperor&#39;s New Threads (Axis), Munsch Ado About Nothing (Chemainus) and The Hobbit (Carousel). You may catch a glimpse of him on TV in “Once Upon a Time”, &quot;Supernatural&quot; and on the YTV sitcom &quot;Some Assembly Required&quot;. Other: Stefano enjoys surfing and riding his Vespa scooter with his charming wife, Ella Simon. TRAVIS HATT Set &amp; Lighting Designer At WCT: Miss Caledonia. Elsewhere: Previous design credits include The Best of Everything, As You Like It (TRU Actors Workshop

Theatre); The Seagull, Tartuffe, Suite Surrender (UofW University Players); A Year With Frog and Toad, Waiting for Godot, Sweeny Todd (Sudbury Theatre Centre); Hana&#39;s Suitcase, The Syringa Tree (Magnus Theatre); Knickers: a Brief Comedy, Dump Guys, Mini Putt (PSFT); A Midsummer Night&#39;s Dream, Dirty Rotten Scoundrels: The Musical (Hart House Theatre); and Hedwig and the Angry Inch (Ghost Light Projects). Travis works as the Technical Co-Ordinator and Technical Theatre Instructor at TRU. MADISON HENRY Stage Manager At WCT: As Apprentice Stage Manager: Comedy of Errors, Mamma Mia!, Made In Italy, In A Blue Moon, Habib’s Unforgettable All Night House Party, A Closer Walk with Patsy Cline, I’ll Be Back Before Midnight, Mary Poppins; Stage Manager: WCT/TRU Young Company’s Bird Brain. Elsewhere: Assistant Stage Manager for The Wizard of Oz (Project X Theatre); Stage Manager for Back to Beulah, Patience and The 15th Annual Director’s Festival (Thompson Rivers University’s Actors Workshop Theatre). Other: What fun it has been playing around in The Hundred Acre Wood! Thanks to Heather for inviting me to be apart of this magical team. Thanks to Mom &amp; Dad &amp; thanks to Greg and thanks to YOU for bringing your little kidlets to the theatre and allowing them to learn, grow, and experience what the arts have to offer. It can lead them to the most imaginative places. Enjoy the show! DEIDRICH ORTON Christopher Robin At WCT: Debut. Other: Deidrich is 11 years old and attends South Sahali Elementary in French Immersion. He has been in WCT Stage One Theatre for several years, participating in The Adventures of Mr. Toad and Just Another Stage One Play, to name a couple! Deidrich has a love of the theatre and has enjoyed getting ready for this amazing production. In his spare time, Deidrich likes to build Lego creations, play video games and draw various cartoon books. He is active in Martial Arts and enjoys staying fit. Deidrich would like to give a special thanks to Terri Runnalls for welcoming him into the theatre world. He would also like to thank Heather Cant and all the people at WCT for their support and encouragement. KIM SELODY Playwright Kim has written and directed many plays for young audiences for companies like Axis Theatre, Green Thumb Theatre, Manitoba Theatre for Young People, Prairie Theatre Exchange, Carousel Theatre and Dynamo Theatre in Montreal. From 1991 to 1996, Kim served as the Artistic Director of the Playwrights Theatre Centre (formerly The New Play Centre). For seven years he toured as an actor and writer with Axis Theatre. He has directed more than 50 professional productions, most being new work by Canadian playwrights. Kim was Artistic Director of Carousel Players in Ontario from 1999 to 2006, He spent 5 years as a Theatre Officer for the Canada Council until 2011. Kim is the Artistic Director of Presentation House Theatre in North Vancouver. MARIAN TRUSCOTT Costume Designer Who doesn’t love Pooh Bear? My first encounter with Winnie the Pooh came in the form of a ratty, stuffed Pooh Bear that was a handme-down from my mom…which was handed down to her from her older brother. This particular Pooh Bear was a baby gift from family in England in about 1935. P.S…I still have him. At WCT: In a Blue Moon (co-production with Arts Club Theatre Touring Series), The 39 Steps, Silent Chap, My Fair Lady, Mambo Italiano (co-production with Fire Hall Arts Centre – Jessie Nomination-Costume DesignSmall Theatre), Unity 1918 and others. Recent theatre credits: The Liar (TRU-Actors Workshop Theatre); Alice and Wonderland (Theatre North West); and The Wizard of Oz–X Fest 2017 (Project X Theatre). A few past credits: Bemused (Theatre North West); James and the Giant Peach, The Merry Adventures of Robin Hood (Project X Theatre); and Complete Works of Wllm Shakespeare (Abridged) (Lunch Box Theatre). Upcoming: The Cure For Death By Lightening (Premiere, WCT), and Newfoundland Mary (Premiere, Lunch Box Theatre, Calgary). Other: Thanks WCT for letting me work at home! A.A. MILNE, Author Alan Alexander Milne (1882–1956) had as one of his early teachers a young H.G. Wells. On a mathematics scholarship, he attended Trinity College, Cambridge, where he edited and wrote for Granta magazine. From 1906 to 1914, he was on the staff of the magazine Punch, where he wrote humorous verse and whimsical essays. He was married in 1913, and in 1915, though a pacifist, he joined the service during World War I as a signalling officer. While he famously denounced war in his pacifist essay “Peace with Honour,” classified documents found recently reveal that Milne was recruited by a secret propaganda unit during the war. When he was not rehired by Punch after the war, Milne turned his attention to playwriting. He achieved considerable success with a series of light comedies, including Mr. Pim Passes By (1921) and The Lucky One (1922), which is presently being revived on the New York stage. Milne also wrote one memorable detective novel, The Red House Mystery (1922), before stumbling upon his true literary métier with some verses written for his son, Christopher Robin. These grew into the collections When We Were Very Young (1924) and Now We Are Six (1927). These remain classics of light verse for children. Source: Encyclopaedia Britannica

WINNIPEG OR WINNIE Winnipeg, or Winnie, was a female black bear that lived at London Zoo from 1915 until her death in 1934. At the outbreak of World War I, Lt. Harry Colebourn, a Canadian cavalry veterinarian bought her, when she was but a young cub, at White River, Ontario, as he travelled through on his way to Europe as part of the Canadian Expeditionary Force. Colebourn named the bear &quot;Winnipeg&quot;, &quot;Winnie&quot; for short, after his home city. Winnie accompanied him to England, becoming the mascot of the unit and a pet to the Second Canadian Infantry Brigade Headquarters. Before leaving for France, Colebourn left Winnie at London Zoo, where she was much loved for her playfulness and gentleness. Among her fans was A. A. Milne&#39;s son Christopher Robin, who consequently changed the name of his own teddy bear from &quot;Edward Bear&quot; to &quot;Winnie the Pooh&quot;, providing the inspiration for his father&#39;s stories about Winnie-the-Pooh. Source: Wikipedia 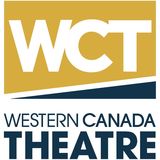