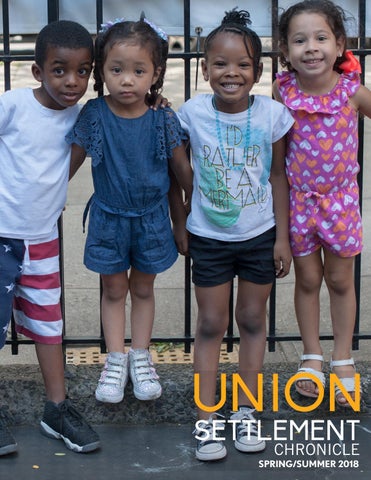 Program Spotlight: Early Childhood Education - serving the “whole child” to prepare for kindergarten and beyond.

Special Services: Our High School Equivalency classes in Spanish are changing the lives of immigrants.

Union Settlement is an on-theground resource for East Harlem residents of all ages, and a passionate advocate for the needs of underserved communities. Since opening our doors in 1895, we have brought education, wellness and community-building programs to our neighborhood, empowering New Yorkers with opportunities to better their lives. With a staff of over 450 and services that impact 10,000 people, Union Settlement is building the vitality and success of East Harlem.

A MESSAGE FROM THE EXECUTIVE DIRECTOR

The City has endangered our early childhood education system

There is no justification for the City’s intentional disparate treatment of nonprofit staff members working on behalf of our youngest and most vulnerable children.

he City’s early childhood education system is in crisis. The cause of this crisis is simple: The City has intentionally and unjustifiably chosen to provide teaching professionals and support staff in the public schools significantly higher salaries and significantly better benefits than equally experienced and equally credentialed teaching professionals and support staff in the nonprofit EarlyLearn centers (like ours) funded by the NYC Administration for Children’s Services. Nearly 60% of the universal pre-kindergarten seats in the City are located in nonprofit centers, so the success of the Mayor’s “Pre-K for All” initiative depends on the strength and viability of programs like ours. The results of the disparities in teacher salaries have been both predictable and devastating. Every week, dedicated EarlyLearn staff members, drawn by higher pay and better benefits, leave nonprofit centers to take jobs with the NYC Department of Education. This has forced nonprofit providers, like Union Settlement, to close classrooms – and in some cases, nonprofit providers have closed entire centers – because we have not been able to attract a sufficient number of certified teachers and other educators to meet staffing requirements. This situation creates tremendous hardship for the low-income families that we serve in the following ways: 1. The fact that we are closing classrooms means that fewer children are being served. 2. Because the pay disparities are greatest for the most experienced teachers – for example, a teacher with a master’s degree and 20 years of experience is paid about $51,000 in a nonprofit center, and over $100,000 in the public schools – we are losing our most experienced teachers at the 3

fastest rate, leaving less-experienced staff teaching the most vulnerable low-income children in our centers. 3. The City’s decision is forcing the closure of EarlyLearn classrooms and facilitating the opening of classrooms in public schools, creating significant hardship for working parents, because the public schools only offer school day classes that end around 2:30 p.m., while our EarlyLearn centers offer full-day programming from 8:00 a.m. to 6:00 p.m., including the summer and school holidays. Needless to say, there is no justification for the City’s intentional disparate treatment of nonprofit staff members working on behalf of our youngest and most vulnerable children. We fear that the early childhood education system – which we have all worked so hard to build – is facing collapse. We promise to not sit idly by while that happens. We have joined with the Campaign for Children, United Neighborhood Houses and the DC1707 union, demanding that the Mayor and City Council provide salary parity for all early childhood workers.

Your gift can help change the lives of a parent and her child. Meet Venus.

rom the first day I walked into one of Union Settlement’s centers, I felt such warmth and belonging from the teachers and staff,” says Venus, whose daughter Olivia currently attends Union Carver Early Childhood Education Center.

“Without Union Settlement, my daughter would not have grown so quickly in her confidence, social or cognitive skills. I’m excited to see what’s next for her!”

Venus, who was born and raised in East Harlem, did not finish high school. When she became a parent for the first time, she did not know where to go for her son’s early childhood education. Her family told her to come to Union Settlement and she is so happy that she did! “First my son went to Union Settlement and now my daughter is there,” Venus said. Her son, who is now 18, will graduate from high school next year.

Venus also became very involved with Union Settlement as a volunteer. She began volunteering at Union Carver in the classroom and in the office, and at one point was volunteering more than 30 hours a week. This helped her rediscover her passion for teaching and caring for children. She has observed firsthand the dedication and attentiveness of the teachers. “I love the teachers at Union Settlement,” says Venus. “They’re awesome. They don’t allow any child to go unnoticed. They take the time to help. If they see that a child is falling behind in any way, they don’t hesitate to make an appointment with the parent to discuss ways to help the child progress.”

As president of the PTA for her daughter’s class, Venus has met many other parents in the community and noted that some families require additional help beyond early childhood “Olivia loves school so much, she doesn’t want to leave at the end of the services. She has learned about the day. They’ve taught her to be respect- other services Union Settlement can ful, polite and helpful. They encourage provide, such as career readiness. the children each day to find ways “Without Union Settlement, my to help their teacher and their classdaughter would not have grown so mates.” quickly in her confidence, social or cognitive skills. I’m excited to see what’s next for her!”

Union Settlement Fosters All Aspects of a Child’s Education “We continually strive to meet the needs of the ‘whole child.’” Chanda Huston, Director of Early Childhood Services

nion Settlement believes that all children can learn at a high level. We are committed to doing what it takes to help each individual child thrive,” says Chanda Huston, Director of Early Childhood Services. Union Settlement’s vision is that the children who graduate from our early childhood programs will be fully prepared to succeed in kindergarten and beyond, and that, though they come from a low-income and underserved community, they will develop skills comparable to children from middle-class homes. We achieve this vision by adopting the educational approaches, curricula and teaching strategies that will help our children and families reach their potential.

“We continually strive to meet the needs of the whole child by fostering a child’s social, emotional, physical, cognitive, language and literacy development, as well as integrating health, nutrition, mental health and family services,” added Dr. Huston. “Our classrooms are inclusive of children with disabilities; respectful of differences in gender, culture, language, ethnicity and family composition; and welcoming to parents.” Union Settlement is currently serving over 500 children in seven centers and through our network of over 60 family childcare providers, who operate early education centers in their own homes under our guidance and supervision. Our early childhood programs work with the entire family and provide the highest quality family services by making referrals for a wide range of family service needs, including mental health and disabilities services, crisis management and health care. Additionally, our centers offer fullday programming, including the summers and holidays, which is especially beneficial to working families. “Union Settlement’s strong foothold in the East Harlem community makes our early childhood program the perfect setting for families who want their children to succeed in school and beyond,” concluded Dr. Huston. 5

diploma opened many doors for me in this country. Without a diploma you cannot do anything,” says Imiler Morales, who arrived in the United States from Cuba barely two years ago. Imiler didn’t know a word of English when he came to the U.S. He had earned a high school diploma in Cuba, but as is the case with most refugees, he did not have (and could not possibly request) any documentation of his education. So, his first task upon arrival here was to get a high school equivalency diploma by sitting for and passing the TASC exam. But to just take this exam, he had to overcome a Imiler Morales, a Union Settlement major hurdle: a series of courses that cover the five Adult Education participant subjects on the test (reading, writing, mathematics, many times students have difficult schedules with science and social studies). work or family, or start with a lower education level, “We are one of the few places in New York that of- and this process can take up to two years. fers free courses in Spanish to help students prepare “Recent immigrants have a different set of condifor the TASC,” says Hilda V. Cortés, Union Settletions than other students, which forces them to make ment’s Director of Adult Education. “Students come a greater effort. They have to make a greater sacrifice to us from 10 to 15 different Latin American countries with different levels of education, and it can be to obtain this diploma that will undoubtedly open a window of opportunity,” says José Iglesias, one of our very challenging.” adult education teachers. To take the TASC exam, you must be at least 19 Once they are ready, students can go to one of years old and live in New York. The test is offered in Spanish and, like the English test, it includes all five more than 20 centers in New York City to take the subjects. In general, students come to class three to exam. The TASC test takes about nine hours to comfour times a week. In some cases, students are ready plete and is usually taken in two days. If the student doesn’t pass one or more of the subjects, those secto take the test in less than six months. However, tions can be retaken after two months. “The exam was very difficult in terms of time. Each section has a time limit in which you have to complete it, and that factor really was the most difficult part of the exam,” says Imiler. Imiler passed his TASC exam and earned his High School Equivalency diploma. He continues to take English classes at Union Settlement, where he is also the editor of his class newsletter. He works as a home health aide and plans to enter a nursing program in the near future. Imiler says, “Thank you, Union Settlement, for making a big part of my dream come true.” Guillermo Rivera, teaching to a Union Settlement Adult Education class

On Wednesday, May 16, hundreds of friends and supporters gathered at our annual Empower East Harlem Spring Benefit held at Guastavinoâ&amp;#x20AC;&amp;#x2122;s to celebrate Union Settlementâ&amp;#x20AC;&amp;#x2122;s mission and service to East Harlem for over 120 years. During the benefit we honored Arthur A. Klein, MD, President of the Mount Sinai Health Network and Ranjini Pillay, Senior Managing Director of Teneo Capital. We also presented awards to corporate partner CORE and law firm partner Paul, Weiss for their ongoing support. WNBC-TV weather anchor Dave Price served as master of ceremonies. It was a festive and successful fundraising event that featured live music from local East Harlem musical group Annette A. Aguilar and the StringBeans, as well as an inspiring speech from one of our College Readiness program alumna, Anabel Rivera. Visit unionsettlement.org/gala for more photos. 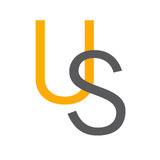