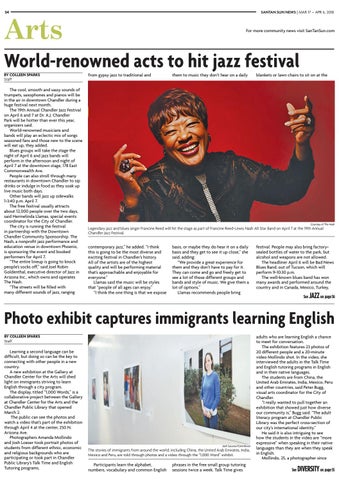 The cool, smooth and sassy sounds of trumpets, saxophones and pianos will be in the air in downtown Chandler during a huge festival next month. The 19th Annual Chandler Jazz Festival on April 6 and 7 at Dr. A.J. Chandler Park will be hotter than ever this year, organizers said. World-renowned musicians and bands will play an eclectic mix of songs seasoned fans and those new to the scene will eat up, they added. Blues groups will take the stage the night of April 6 and jazz bands will perform in the afternoon and night of April 7 at the downtown stage, 178 East Commonwealth Ave. People can also stroll through many restaurants in downtown Chandler to sip drinks or indulge in food as they soak up live music both days. Other bands will jazz up sidewalks 1-3:40 p.m. April 7. The free festival usually attracts about 12,000 people over the two days, said Hermelinda Llamas, special events coordinator for the City of Chandler. The city is running the festival in partnership with the Downtown Chandler Community Sponsorship. The Nash, a nonprofit jazz performance and education venue in downtown Phoenix, is sponsoring the event and booked performers for April 7. “The entire lineup is going to knock people’s socks off,” said Joel Robin Goldenthal, executive director of Jazz in Arizona Inc., which owns and operates The Nash. “The streets will be filled with many different sounds of jazz, ranging

from gypsy jazz to traditional and

them to music they don’t hear on a daily

blankets or lawn chairs to sit on at the

Courtesy of The Nash

Legendary jazz and blues singer Francine Reed will hit the stage as part of Francine Reed-Lewis Nash All Star Band on April 7 at the 19th Annual Chandler Jazz Festival.

contemporary jazz,” he added. “I think this is going to be the most diverse and exciting festival in Chandler’s history. All of the artists are of the highest quality and will be performing material that’s approachable and enjoyable for everyone.” Llamas said the music will be styles that “people of all ages can enjoy.” “I think the one thing is that we expose

basis, or maybe they do hear it on a daily basis and they get to see it up close,” she said, adding: “We provide a great experience for them and they don’t have to pay for it. They can come and go and freely get to see a lot of those different groups and bands and style of music. We give them a lot of options.” Llamas recommends people bring

festival. People may also bring factorysealed bottles of water to the park, but alcohol and weapons are not allowed. The headliner April 6 will be Bad News Blues Band, out of Tucson, which will perform 9-10:30 p.m. The well-known blues band has won many awards and performed around the country and in Canada, Mexico, Turkey, See

Learning a second language can be difficult, but doing so can be the key to connecting with other people in a new country. A new exhibition at the Gallery at Chandler Center for the Arts will shed light on immigrants striving to learn English through a city program. The display, titled “1,000 Words,” is a collaborative project between the Gallery at Chandler Center for the Arts and the Chandler Public Library that opened March 2. The public can see the photos and watch a video that’s part of the exhibition through April 4 at the center, 250 N. Arizona Ave. Photographers Amanda Mollindo and Josh Loeser took portrait photos of students from different ethnic, economic and religious backgrounds who are participating or took part in Chandler Public Library’s Talk Time and English Tutoring programs.

The stories of immigrants from around the world, including China, the United Arab Emirates, India, Mexico and Peru, are told through photos and a video through the “1,000 Word” exhibit.

adults who are learning English a chance to meet for conversation. The exhibition features 23 photos of 20 different people and a 20-minute video Mollindo shot. In the video, she interviewed the adults in the Talk Time and English tutoring programs in English and in their native languages. The students are from China, the United Arab Emirates, India, Mexico, Peru and other countries, said Peter Bugg, visual arts coordinator for the City of Chandler. “I really wanted to pull together an exhibition that showed just how diverse our community is,” Bugg said. “The adult literacy program at Chandler Public Library was the perfect cross-section of our city’s international identity.” He said it is also intriguing to see how the students in the video are “more expressive” when speaking in their native languages than they are when they speak in English. Mollindo, 25, a photographer since See