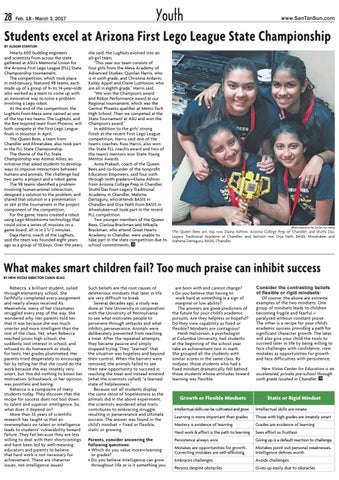 Nearly 600 budding engineers and scientists from across the state gathered at ASU’s Memorial Union for the Arizona First Lego League (FLL) State Championship tournament. The competition, which took place in mid-January, featured 98 teams, each made up of a group of 9- to 14-year-olds who worked as a team to come up with an innovative way to solve a problem involving a Lego robot. At the end of the competition, the LugNuts from Mesa were named as one of the top two teams. The LugNuts, and the Bee Inspired team from Phoenix, will both compete at the First Lego League finals in Houston in April. The Queen Bees, a team from Chandler and Ahwatukee, also took part in the FLL State Championship. The theme of the FLL State Championship was Animal Allies, an initiative that asked students to develop ways to improve interactions between humans and animals. The challenge had two parts: a project and a robot game. The 98 teams identified a problem involving human-animal interaction, designed a solution to the problem, and shared that solution in a presentation or skit at the tournament in the project component of the competition. For the game, teams created a robot using Lego Mindstorms technology that could solve a series of missions on a game board, all in in 2 1/2 minutes. Daja Harris, coach of the LugNuts, said the team was founded eight years ago as a group of 10 boys. Over the years,

she said, the LugNuts evolved into an all-girl team. “This year our team consists of four girls from the Mesa Academy of Advanced Studies: Quinlan Harris, who is in sixth grade, and Christina Ardavin, Kailey Appel and Claire LuzHoxsie, who are all in eighth grade,” Harris said. “We won the Champion’s award and Robot Performance award at our Regional tournament, which was the Central Phoenix qualifier at Metro Tech High School. Then we competed at the State Tournament at ASU and won the Champion’s award.” In addition to the girls’ strong finish at the recent First Lego League competition, Harris said one of the team’s coaches, Russ Harris, also won the State FLL coach’s award and two of the team’s mentors won State Young Mentor Awards. Anna Prakash, coach of the Queen Bees and co-founder of the nonprofit Education Empowers, said four sixth through ninth graders—Elaina Ashton from Arizona College Prep in Chandler, Stuthi Das from Legacy Traditional Academy in Chandler, Mahima Dattaguru, who attends BASIS in Chandler and Diya Nath from BASIS in Ahwatukee—all took part in the recent FLL competition. Two younger members of the Queen Bees, Clarissa Brackman and Mikayla Brackman, who attend Great Hearts Academy in Chandler, were unable to take part in the state competition due to school commitments.

Rebecca, a brilliant student, sailed through elementary school. She faithfully completed every assignment and nearly always received A’s. Meanwhile, many of her classmates struggled every step of the way. She wondered why. Her parents told her that it was because she was much smarter and more intelligent than the rest of the class. Yet, when Rebecca reached junior high school, she suddenly lost interest in school, and refused to do homework or study for tests. Her grades plummeted. Her parents tried desperately to encourage her by telling her that she could do the work because she was innately very smart, but this did nothing to boost her motivation. Schoolwork, in her opinion, was pointless and boring. Rebecca is a composite of many students today. They discover that the recipe for success does not boil down to talent and superior intelligence. So, what does it depend on? More than 35 years of scientific research has taught us that an overemphasis on talent or intelligence leads to students’ vulnerability toward failure. They fail because they are less willing to deal with their shortcomings and have been led by well-meaning educators and parents to believe that hard work is not necessary for achievement. These are character issues, not intelligence issues!

Such beliefs are the root causes of deleterious mindsets that later in life are very difficult to break. Several decades ago, a study was done at Yale University in cooperation with the University of Pennsylvania to see what motivates people to persevere through setbacks and what inhibits perseverance. Animals were deliberately prevented from reaching a treat. After the repeated attempts, they became passive and simply stopped trying. They “learned” that the situation was hopeless and beyond their control. When the barriers were removed, the animals failed to see their new opportunity to succeed in reaching the treat and instead entered (what the scientists called) “a learned state of helplessness.” Because not all students display the same sense of hopelessness as the animals did in the above experiment, the scientists wondered what traits contributes to embracing struggle, resulting in perseverance and ultimate success. The answer was found in the child’s mindset – fixed or flexible, static or growing. Parents, consider answering the following questions: • Which do you value more—learning or grades? • Do you believe intelligence can grow throughout life or is it something you

are born with and cannot change? • Do you believe that having to work hard at something is a sign of marginal or low ability? The answers are good predictors of the future for your child’s academic pursuits. Are they helpless or hopeful? Do they view capability as fixed or flexible? Mindsets are contagious! Heidi Halvorson, a psychologist at Columbia University, had students at the beginning of the school year take an achievement test in math. She grouped all the students with similar scores in the same class. By midyear, those students who had a fixed mindset dramatically fell behind those students whose attitudes toward learning was flexible.

Consider the contrasting beliefs of flexible or rigid mindsets: Of course, the above are extreme examples of the two mindsets. One group of mindsets leads to children becoming fragile and fearful – paralyzed without constant praise. The other is a recipe for your child’s academic success providing a path for significant character growth. The later will also give your child the tools to succeed later in life by being willing to face challenges with confidence, view mistakes as opportunities for growth and face difficulties with persistence. New Vistas Center for Education is an accelerated, private pre-school through sixth grade located in Chandler.

Intellectual skills can be cultivated and grow

Learning is more important than grades

Those with high grades are innately smart

Mastery is evidence of learning

Grades are evidence of learning

Hard work &amp; effort is the path to learning

Giving up is a default reaction to challenge.

Mistakes are opportunities for growth. Correcting mistakes are self-affirming

Gives up easily due to obstacles