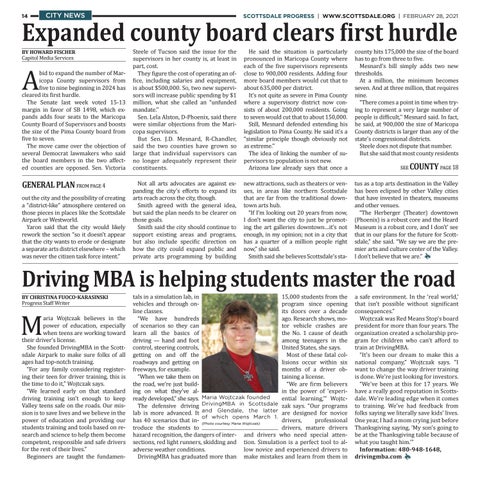 bid to expand the number of Maricopa County supervisors from five to nine beginning in 2024 has cleared its first hurdle. The Senate last week voted 15-13 margin in favor of SB 1498, which expands adds four seats to the Maricopa County Board of Supervisors and boosts the size of the Pima County board from five to seven. The move came over the objection of several Democrat lawmakers who said the board members in the two affected counties are opposed. Sen. Victoria

out the city and the possibility of creating a “district-like” atmosphere centered on those pieces in places like the Scottsdale Airpark or Westworld. Yaron said that the city would likely rework the section “so it doesn’t appear that the city wants to erode or designate a separate arts district elsewhere – which was never the citizen task force intent.”

Steele of Tucson said the issue for the supervisors in her county is, at least in part, cost. They figure the cost of operating an office, including salaries and equipment, is about $500,000. So, two new supervisors will increase public spending by $1 million, what she called an “unfunded mandate.’’ Sen. Lela Alston, D-Phoenix, said there were similar objections from the Maricopa supervisors. But Sen. J.D. Mesnard, R-Chandler, said the two counties have grown so large that individual supervisors can no longer adequately represent their constituents.

Not all arts advocates are against expanding the city’s efforts to expand its arts reach across the city, though. Smith agreed with the general idea, but said the plan needs to be clearer on those goals. Smith said the city should continue to support existing areas and programs, but also include specific direction on how the city could expand public and private arts programming by building

He said the situation is particularly pronounced in Maricopa County where each of the five supervisors represents close to 900,000 residents. Adding four more board members would cut that to about 635,000 per district. It’s not quite as severe in Pima County where a supervisory district now consists of about 200,000 residents. Going to seven would cut that to about 150,000. Still, Mesnard defended extending his legislation to Pima County. He said it’s a “similar principle though obviously not as extreme.’’ The idea of linking the number of supervisors to population is not new. Arizona law already says that once a

county hits 175,000 the size of the board has to go from three to five. Mesnard’s bill simply adds two new thresholds. At a million, the minimum becomes seven. And at three million, that requires nine. “There comes a point in time when trying to represent a very large number of people is difficult,’’ Mesnard said. In fact, he said, at 900,000 the size of Maricopa County districts is larger than any of the state’s congressional districts. Steele does not dispute that number. But she said that most county residents

new attractions, such as theaters or venues, in areas like northern Scottsdale that are far from the traditional downtown arts hub. “If I’m looking out 20 years from now, I don’t want the city to just be promoting the art galleries downtown…it’s not enough, in my opinion; not in a city that has a quarter of a million people right now,” she said. Smith said she believes Scottsdale’s sta-

tus as a top arts destination in the Valley has been eclipsed by other Valley cities that have invested in theaters, museums and other venues. “The Herberger (Theater) downtown (Phoenix) is a robust core and the Heard Museum is a robust core, and I don’t’ see that in our plans for the future for Scottsdale,” she said. “We say we are the premier arts and culture center of the Valley. I don’t believe that we are.”

15,000 students from the tals in a simulation lab, in program since opening vehicles and through online classes. its doors over a decade “We have hundreds ago. Research shows, moof scenarios so they can tor vehicle crashes are learn all the basics of the No. 1 cause of death driving — hand and foot among teenagers in the control, steering controls, United States, she says. getting on and off the Most of these fatal colroadways and getting on lisions occur within six freeways, for example. months of a driver ob“When we take them on taining a license. the road, we’re just build“We are firm believers ing on what they’ve alin the power of ‘experiready developed,” she says. Maria Wojtczak founded ential learning,’” WojtcThe defensive driving DrivingMBA in Scottsdale zak says. “Our programs lab is more advanced. It and Glendale, the latter are designed for novice of which opens March 1. has 40 scenarios that in- (Photo courtesy Maria Wojtczak) drivers, professional troduce the students to drivers, mature drivers hazard recognition, the dangers of inter- and drivers who need special attensections, red light runners, skidding and tion. Simulation is a perfect tool to allow novice and experienced drivers to adverse weather conditions. DrivingMBA has graduated more than make mistakes and learn from them in

a safe environment. In the ‘real world,’ that isn’t possible without significant consequences.” Wojtczak was Red Means Stop’s board president for more than four years. The organization created a scholarship program for children who can’t afford to train at DrivingMBA. “It’s been our dream to make this a national company,” Wojtczak says. “I want to change the way driver training is done. We’re just looking for investors. “We’ve been at this for 17 years. We have a really good reputation in Scottsdale. We’re leading edge when it comes to training. We’ve had feedback from folks saying we literally save kids’ lives. One year, I had a mom crying just before Thanksgiving saying, ‘My son’s going to be at the Thanksgiving table because of what you taught him.’” Information: 480-948-1648, drivingmba.com

aria Wojtczak believes in the power of education, especially when teens are working toward their driver’s license. She founded DrivingMBA in the Scottsdale Airpark to make sure folks of all ages had top-notch training. “For any family considering registering their teen for driver training, this is the time to do it,” Wojtczak says. “We learned early on that standard driving training isn’t enough to keep Valley teens safe on the roads. Our mission is to save lives and we believe in the power of education and providing our students training and tools based on research and science to help them become competent, responsible and safe drivers for the rest of their lives.” Beginners are taught the fundamen-