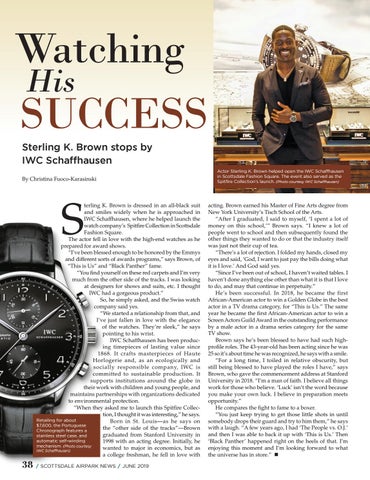 terling K. Brown is dressed in an all-black suit and smiles widely when he is approached in IWC Schaffhausen, where he helped launch the watch company’s Spitfire Collection in Scottsdale Fashion Square. The actor fell in love with the high-end watches as he prepared for award shows. “I’ve been blessed enough to be honored by the Emmys and different sorts of awards programs,” says Brown, of “This is Us” and “Black Panther” fame. “You find yourself on these red carpets and I’m very much from the other side of the tracks. I was looking at designers for shows and suits, etc. I thought IWC had a gorgeous product.” So, he simply asked, and the Swiss watch company said yes. “We started a relationship from that, and I’ve just fallen in love with the elegance of the watches. They’re sleek,” he says pointing to his wrist. IWC Schaffhausen has been producing timepieces of lasting value since 1868. It crafts masterpieces of Haute Horlogerie and, as an ecologically and socially responsible company, IWC is committed to sustainable production. It supports institutions around the globe in their work with children and young people, and maintains partnerships with organizations dedicated to environmental protection. “When they asked me to launch this Spitfire Collection, I thought it was interesting,” he says. Retailing for about Born in St. Louis—as he says on $7,600, the Portuguese the “other side of the tracks”—Brown Chronograph features a graduated from Stanford University in stainless steel case, and automatic self-winding 1998 with an acting degree. Initially, he mechanism. (Photo courtesy wanted to major in economics, but as IWC Schaffhausen) a college freshman, he fell in love with

acting. Brown earned his Master of Fine Arts degree from New York University’s Tisch School of the Arts. “After I graduated, I said to myself, ‘I spent a lot of money on this school,’” Brown says. “I knew a lot of people went to school and then subsequently found the other things they wanted to do or that the industry itself was just not their cup of tea. “There’s a lot of rejection. I folded my hands, closed my eyes and said, ‘God, I want to just pay the bills doing what it is I love.’ And God said yes. “Since I’ve been out of school, I haven’t waited tables. I haven’t done anything else other than what it is that I love to do, and may that continue in perpetuity.” He’s been successful. In 2018, he became the first African-American actor to win a Golden Globe in the best actor in a TV drama category, for “This is Us.” The same year he became the first African-American actor to win a Screen Actors Guild Award in the outstanding performance by a male actor in a drama series category for the same TV show. Brown says he’s been blessed to have had such highprofile roles. The 43-year-old has been acting since he was 25 so it’s about time he was recognized, he says with a smile. “For a long time, I toiled in relative obscurity, but still being blessed to have played the roles I have,” says Brown, who gave the commencement address at Stanford University in 2018. “I’m a man of faith. I believe all things work for those who believe. ‘Luck’ isn’t the word because you make your own luck. I believe in preparation meets opportunity.” He compares the fight to fame to a boxer. “You just keep trying to get those little shots in until somebody drops their guard and try to him them,” he says with a laugh. “A few years ago, I had ‘The People vs. O.J.’ and then I was able to back it up with ‘This is Us.’ Then ‘Black Panther’ happened right on the heels of that. I’m enjoying this moment and I’m looking forward to what the universe has in store.” 