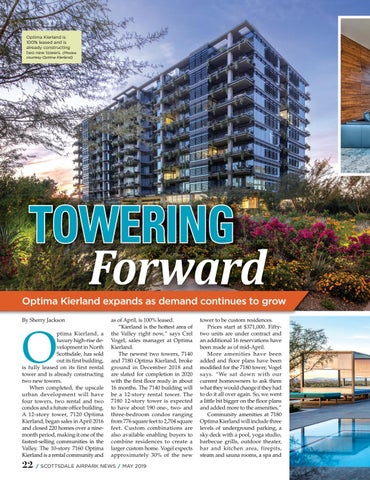 ptima Kierland, a luxury high-rise development in North Scottsdale, has sold out its first building, is fully leased on its first rental tower and is already constructing two new towers. When completed, the upscale urban development will have four towers, two rental and two condos and a future office building. A 12-story tower, 7120 Optima Kierland, began sales in April 2016 and closed 220 homes over a ninemonth period, making it one of the fastest-selling communities in the Valley. The 10-story 7160 Optima Kierland is a rental community and

as of April, is 100% leased. “Kierland is the hottest area of the Valley right now,” says Crel Vogel, sales manager at Optima Kierland. The newest two towers, 7140 and 7180 Optima Kierland, broke ground in December 2018 and are slated for completion in 2020 with the first floor ready in about 16 months. The 7140 building will be a 12-story rental tower. The 7180 12-story tower is expected to have about 190 one-, two- and three-bedroom condos ranging from 776 square feet to 2,704 square feet. Custom combinations are also available enabling buyers to combine residences to create a larger custom home. Vogel expects approximately 30% of the new

tower to be custom residences. Prices start at $371,000. Fiftytwo units are under contract and an additional 16 reservations have been made as of mid-April. More amenities have been added and floor plans have been modified for the 7180 tower, Vogel says. “We sat down with our current homeowners to ask them what they would change if they had to do it all over again. So, we went a little bit bigger on the floor plans and added more to the amenities.” Community amenities at 7180 Optima Kierland will include three levels of underground parking, a sky deck with a pool, yoga studio, barbecue grills, outdoor theater, bar and kitchen area, firepits, steam and sauna rooms, a spa and