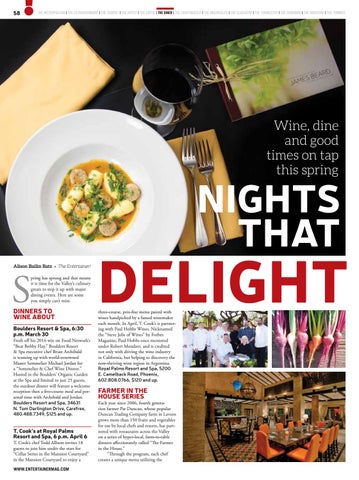 Wine, dine and good times on tap this spring

pring has sprung and that means it is time for the Valley’s culinary greats to step it up with major dining events. Here are some you simply can’t miss:

DINNERS TO WINE ABOUT

Fresh off his 2016 win on Food Network’s “Beat Bobby Flay,” Boulders Resort & Spa executive chef Brian Archibald is teaming up with world-renowned Master Sommelier Michael Jordan for a “Sommelier & Chef Wine Dinner.” Hosted in the Boulders’ Organic Garden at the Spa and limited to just 25 guests, the outdoor dinner will feature a welcome reception then a five-course meal and personal time with Archibald and Jordan. Boulders Resort and Spa, 34631 N. Tom Darlington Drive, Carefree, 480.488.7349, $125 and up.

DELIGHT three-course, prix-fixe menu paired with wines handpicked by a famed winemaker each month. In April, T. Cook’s is partnering with Paul Hobbs Wines. Nicknamed the “Steve Jobs of Wines” by Forbes Magazine, Paul Hobbs once mentored under Robert Mondavi, and is credited not only with driving the wine industry in California, but helping to discovery the now-thriving wine region in Argentina. Royal Palms Resort and Spa, 5200 E. Camelback Road, Phoenix, 602.808.0766, $120 and up.

FARMER IN THE HOUSE SERIES

Each year since 2006, fourth generation farmer Pat Duncan, whose popular Duncan Trading Company farm in Laveen grows more than 150 fruits and vegetables for use by local chefs and resorts, has partnered with restaurants across the Valley on a series of hyper-local, farm-to-table dinners affectionately called “The Farmer in the House.” “Through the program, each chef creates a unique menu utilizing the