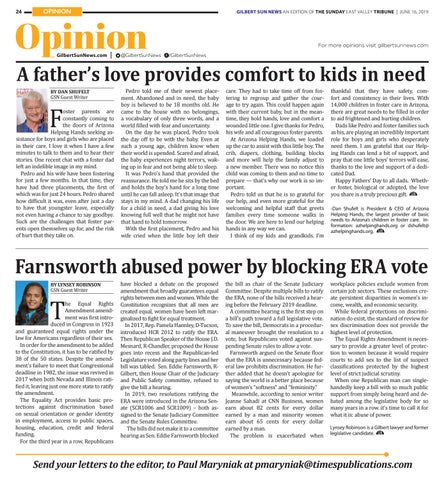 oster parents are constantly coming to the doors of Arizona Helping Hands seeking assistance for boys and girls who are placed in their care. I love it when I have a few minutes to talk to them and to hear their stories. One recent chat with a foster dad left an indelible image in my mind. Pedro and his wife have been fostering for just a few months. In that time, they have had three placements, the first of which was for just 24 hours. Pedro shared how difficult it was, even after just a day to have that youngster leave, especially not even having a chance to say goodbye. Such are the challenges that foster parents open themselves up for, and the risk of hurt that they take on.

Pedro told me of their newest placement. Abandoned and in need, the baby boy is believed to be 18 months old. He came to the house with no belongings, a vocabulary of only three words, and a world filled with fear and uncertainty. On the day he was placed, Pedro took the day off to be with the baby. Even at such a young age, children know when their world is upended. Scared and afraid, the baby experiences night terrors, waking up in fear and not being able to sleep. It was Pedro’s hand that provided the reassurance. He told me he sits by the bed and holds the boy’s hand for a long time until he can fall asleep. It’s that image that stays in my mind. A dad changing his life for a child in need, a dad giving his love knowing full well that he might not have that hand to hold tomorrow. With the first placement, Pedro and his wife cried when the little boy left their

care. They had to take time off from fostering to regroup and gather the courage to try again. This could happen again with their current baby, but in the meantime, they hold hands, love and comfort a wounded little one. I give thanks for Pedro, his wife and all courageous foster parents. At Arizona Helping Hands, we loaded up the car to assist with this little boy. The crib, diapers, clothing, building blocks and more will help the family adjust to a new member. There was no notice this child was coming to them and no time to prepare — that’s why our work is so important. Pedro told us that he is so grateful for our help, and even more grateful for the welcoming and helpful staff that greets families every time someone walks in the door. We are here to lend our helping hands in any way we can. I think of my kids and grandkids. I’m

thankful that they have safety, comfort and consistency in their lives. With 14,000 children in foster care in Arizona, there are great needs to be filled in order to aid frightened and hurting children. Dads like Pedro and foster families such as his, are playing an incredibly important role for boys and girls who desperately need them. I am grateful that our Helping Hands can lend a bit of support, and pray that one little boys’ terrors will ease, thanks to the love and support of a dedicated Dad. Happy Fathers’ Day to all dads. Whether foster, biological or adopted, the love you share is a truly precious gift.

he Equal Rights Amendment amendment was first introduced in Congress in 1923 and guaranteed equal rights under the law for Americans regardless of their sex. In order for the amendment to be added to the Constitution, it has to be ratified by 38 of the 50 states. Despite the amendment’s failure to meet that Congressional deadline in 1982, the issue was revived in 2017 when both Nevada and Illinois ratified it, leaving just one more state to ratify the amendment. The Equality Act provides basic protections against discrimination based on sexual orientation or gender identity in employment, access to public spaces, housing, education, credit and federal funding. For the third year in a row, Republicans

have blocked a debate on the proposed amendment that broadly guarantees equal rights between men and women. While the Constitution recognizes that all men are created equal, women have been left marginalized to fight for equal treatment. In 2017, Rep. Pamela Hannley, D-Tucson, introduced HCR 2012 to ratify the ERA. Then Republican Speaker of the House J.D. Mesnard, R-Chandler, proposed the House goes into recess and the Republican-led Legislature voted along party lines and her bill was tabled. Sen. Eddie Farnsworth, RGilbert, then House Chair of the Judiciary and Public Safety committee, refused to give the bill a hearing. In 2019, two resolutions ratifying the ERA were introduced in the Arizona Senate (SCR1006 and SCR1009) – both assigned to the Senate Judiciary Committee and the Senate Rules Committee. The bills did not make it to a committee hearing as Sen. Eddie Farnsworth blocked

the bill as chair of the Senate Judiciary Committee. Despite multiple bills to ratify the ERA, none of the bills received a hearing before the February 2019 deadline. A committee hearing is the first step on a bill’s path toward a full legislative vote. To save the bill, Democrats in a procedural maneuver brought the resolution to a vote, but Republicans voted against suspending Senate rules to allow a vote. Farnsworth argued on the Senate floor that the ERA is unnecessary because federal law prohibits discrimination. He further added that he doesn’t apologize for saying the world is a better place because of women’s “softness” and “femininity.” Meanwhile, according to senior writer Jeanne Sahadi at CNN Business, women earn about 82 cents for every dollar earned by a man and minority women earn about 65 cents for every dollar earned by a man. The problem is exacerbated when

workplace policies exclude women from certain job sectors. These exclusions create persistent disparities in women’s income, wealth, and economic security. While federal protections on discrimination do exist, the standard of review for sex discrimination does not provide the highest level of protection. The Equal Rights Amendment is necessary to provide a greater level of protection to women because it would require courts to add sex to the list of suspect classifications protected by the highest level of strict judicial scrutiny. When one Republican man can singlehandedly keep a bill with so much public support from simply being heard and debated among the legislative body for so many years in a row. it’s time to call it for what it is: abuse of power.

Lynsey Robinson is a Gilbert lawyer and former legislative candidate.

Send your letters to the editor, to Paul Maryniak at pmaryniak@timespublications.com