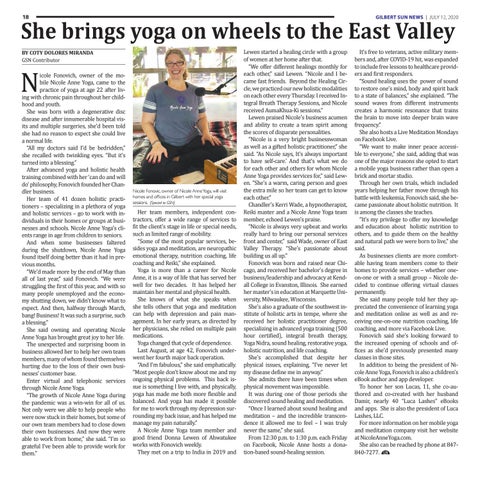 icole Fonovich, owner of the mobile Nicole Anne Yoga, came to the practice of yoga at age 22 after living with chronic pain throughout her childhood and youth. She was born with a degenerative disc disease and after innumerable hospital visits and multiple surgeries, she’d been told she had no reason to expect she could live a normal life. “All my doctors said I’d be bedridden,” she recalled with twinkling eyes. “But it’s turned into a blessing.” After advanced yoga and holistic health training combined with her ‘can do and will do’ philosophy, Fonovich founded her Chandler business. Her team of 41 dozen holistic practitioners – specializing in a plethora of yoga and holistic services – go to work with individuals in their homes or groups at businesses and schools. Nicole Anne Yoga’s clients range in age from children to seniors. And when some businesses faltered during the shutdown, Nicole Anne Yoga found itself doing better than it had in previous months. “We’d made more by the end of May than all of last year,” said Fonovich. “We were struggling the first of this year, and with so many people unemployed and the economy shutting down, we didn’t know what to expect. And then, halfway through March, bang! Business! It was such a surprise, such a blessing.” She said owning and operating Nicole Anne Yoga has brought great joy to her life. The unexpected and surprising boom in business allowed her to help her own team members, many of whom found themselves hurting due to the loss of their own businesses’ customer base. Enter virtual and telephonic services through Nicole Anne Yoga. “The growth of Nicole Anne Yoga during the pandemic was a win-win for all of us. Not only were we able to help people who were now stuck in their homes, but some of our own team members had to close down their own businesses. And now they were able to work from home,” she said. “I’m so grateful I’ve been able to provide work for them.”

Nicole Fonovic, owner of Nicole Anne Yoga, will visit homes and offices in Gilbert with her special yoga sessions. (Special to GSN)

Her team members, independent contractors, offer a wide range of services to fit the client’s stage in life or special needs, such as limited range of mobility. “Some of the most popular services, besides yoga and meditation, are neuropathic emotional therapy, nutrition coaching, life coaching and Reiki,” she explained. Yoga is more than a career for Nicole Anne, it is a way of life that has served her well for two decades. It has helped her maintain her mental and physical health. She knows of what she speaks when she tells others that yoga and meditation can help with depression and pain management. In her early years, as directed by her physicians, she relied on multiple pain medications. Yoga changed that cycle of dependence. Last August, at age 42, Fonovich underwent her fourth major back operation. “And I’m fabulous,” she said emphatically. “Most people don’t know about me and my ongoing physical problems. This back issue is something I live with, and physically, yoga has made me both more flexible and balanced. And yoga has made it possible for me to work through my depression surrounding my back issue, and has helped me manage my pain naturally.” A Nicole Anne Yoga team member and good friend Donna Lewen of Ahwatukee works with Fonovich weekly. They met on a trip to India in 2019 and

Lewen started a healing circle with a group of women at her home after that. “We offer different healings monthly for each other,” said Lewen. “Nicole and I became fast friends. Beyond the Healing Circle, we practiced our new holistic modalities on each other every Thursday. I received Integral Breath Therapy Sessions, and Nicole received AumaKhua-Ki sessions.” Lewen praised Nicole’s business acumen and ability to create a team spirit among the scores of disparate personalities. “Nicole is a very bright businesswoman as well as a gifted holistic practitioner,” she said. “As Nicole says, It’s always important to have self-care.’ And that’s what we do for each other and others for whom Nicole Anne Yoga provides services for,” said Lewen. “She’s a warm, caring person and goes the extra mile so her team can get to know each other.” Chandler’s Kerri Wade, a hypnotherapist, Reiki master and a Nicole Anne Yoga team member, echoed Lewen’s praise. “Nicole is always very upbeat and works really hard to bring our personal services front and center,” said Wade, owner of East Valley Therapy. “She’s passionate about building us all up.” Fonovich was born and raised near Chicago, and received her bachelor’s degree in business/leadership and advocacy at Kendall College in Evanston, Illinois. She earned her master’s in education at Marquette University, Milwaukee, Wisconsin. She’s also a graduate of the southwest institute of holistic arts in tempe, where she received her holistic practitioner degree, specializing in advanced yoga training (500 hour certified), integral breath therapy, Yoga Nidra, sound healing, restorative yoga, holistic nutrition, and life coaching. She’s accomplished that despite her physical issues, explaining, “I’ve never let my disease define me in anyway.” She admits there have been times when physical movement was impossible. It was during one of those periods she discovered sound healing and meditation. “Once I learned about sound healing and meditation – and the incredible transcendence it allowed me to feel – I was truly never the same,” she said. From 12:30 p.m. to 1:30 p.m. each Friday on Facebook, Nicole Anne hosts a donation-based sound-healing session.

It’s free to veterans, active military members and, after COVID-19 hit, was expanded to include free lessons to healthcare providers and first responders. “Sound healing uses the power of sound to restore one’s mind, body and spirit back to a state of balances,” she explained. “The sound waves from different instruments creates a harmonic resonance that trains the brain to move into deeper brain wave frequency.” She also hosts a Live Meditation Mondays on Facebook Live. “We want to make inner peace accessible to everyone,” she said, adding that was one of the major reasons she opted to start a mobile yoga business rather than open a brick and mortar studio. Through her own trials, which included years helping her father move through his battle with leukemia, Fonovich said, she became passionate about holistic nutrition. It is among the classes she teaches. “It’s my privilege to offer my knowledge and education about holistic nutrition to others, and to guide them on the healthy and natural path we were born to live,” she said. As businesses clients are more comfortable having team members come to their homes to provide services – whether oneon-one or with a small group – Nicole decided to continue offering virtual classes permanently. She said many people told her they appreciated the convenience of learning yoga and meditation online as well as and receiving one-on-one nutrition coaching, life coaching, and more via Facebook Live. Fonovich said she’s looking forward to the increased opening of schools and offices as she’d previously presented many classes in those sites. In addition to being the president of Nicole Anne Yoga, Fonovich is also a children’s eBook author and app developer. To honor her son Lucas, 11, she co-authored and co-created with her husband Damir, nearly 40 “Luca Lashes” eBooks and apps. She is also the president of Luca Lashes, LLC. For more information on her mobile yoga and meditation company visit her website at NicoleAnneYoga.com. She also can be reached by phone at 847840-7277.