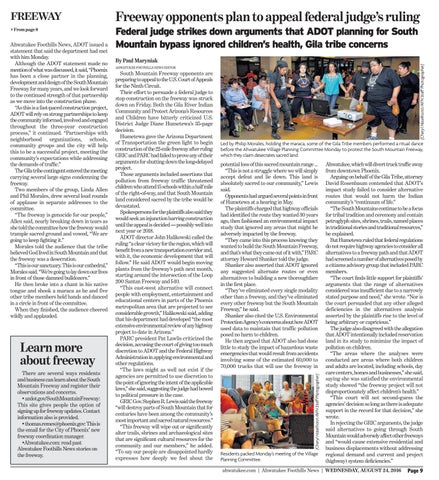 Learn more about freeway There are several ways residents and business can learn about the South Mountain Freeway and register their observations and concerns. • azdot.gov/SouthMountainFreeway: This site gives people the option of signing up for freeway updates. Contact information also is provided. • thomas.remes@phoenix.gov​​: This is the email for the City of Phoenix’ new freeway coordination manager. •Ahwatukee.com: read past Ahwatukee Foothills News stories on the freeway.

South Mountain Freeway opponents are preparing to appeal to the U.S. Court of Appeals for the Ninth Circuit. Their effort to persuade a federal judge to stop construction on the freeway was struck down on Friday. Both the Gila River Indian Community and Protect Arizona’s Resources and Children have bitterly criticized U.S. District Judge Diane Humetewa’s 35-page decision. Humetewa gave the Arizona Department of Transportation the green light to begin construction of the 22-mile freeway after ruling GRIC and PARC had failed to prove any of their arguments for shutting down the long-delayed project. Those arguments included assertions that pollution from freeway traffic threatened children who attend 15 schools within a half mile of the right-of-way, and that South Mountain land considered sacred by the tribe would be devastated. Spokespersons for the plaintiffs also said they would seek an injunction barring construction until the appeal is decided — possibly well into next year or 2018. ADOT director John Halikowski called the ruling “a clear victory for the region, which will benefit from a new transportation corridor and, with it, the economic development that will follow.” He said ADOT would begin moving plants from the freeway’s path next month, starting around the intersection of the Loop 200 Santan Freeway and I-10. “This east-west alternative will connect people with employment, entertainment and educational centers in parts of the Phoenix metropolitan area that are projected to see considerable growth,” Halikowski said, adding that his department had developed “the most extensive environmental review of any highway project to date in Arizona.” PARC president Pat Lawlis criticized the decision, accusing the court of giving too much discretion to ADOT and the Federal Highway Administration in applying environmental and other regulations. “The laws might as well not exist if the agencies are permitted to use discretion to the point of ignoring the intent of the applicable laws,” she said, suggesting the judge had bowed to political pressure in the case. GRIC Gov. Stephen R. Lewis said the freeway “will destroy parts of South Mountain that for centuries have been among the community’s most important and sacred natural resources.” “This freeway will wipe out or significantly alter trails, shrines and archaeological sites that are significant cultural resources for the community and our members,” he added. “To say our people are disappointed hardly expresses how deeply we feel about the

Led by Philip Morales, holding the maraca, some of the Gila Tribe members performed a ritual dance before the Ahwatukee Village Planning Committee Monday to protest the South Mountain Freeway, which they claim desecrates sacred land.

potential loss of this sacred mountain range ... “This is not a struggle where we will simply accept defeat and lie down. This land is absolutely sacred to our community,” Lewis said. Opponents had argued several points in front of Humetewa at a hearing in May. The plaintiffs charged that highway officials had identified the route they wanted 30 years ago, then fashioned an environmental impact study that ignored any areas that might be adversely impacted by the freeway. “They came into this process knowing they wanted to build the South Mountain Freeway, and that’s what they came out of it with,” PARC attorney Howard Shanker told the judge. Shanker also asserted that ADOT ignored any suggested alternate routes or even alternatives to building a new thoroughfare in the first place. “They’ve eliminated every single modality other than a freeway, and they’ve eliminated every other freeway but the South Mountain Freeway,” he said. Shanker also cited the U.S. Environmental Protection Agency’s concerns about how ADOT used data to maintain that traffic pollution posed no harm to children. He then argued that ADOT also had done little to study the impact of hazardous waste emergencies that would result from accidents involving some of the estimated 60,000 to 70,000 trucks that will use the freeway in (Cheryl Haselhorst/AFN Staff Photographer)

Ahwatukee Foothills News, ADOT issued a statement that said the department had met with him Monday. Although the ADOT statement made no mention of what was discussed, it said, “Phoenix has been a close partner in the planning, development and design of the South Mountain Freeway for many years, and we look forward to the continued strength of that partnership as we move into the construction phase. “As this is a fast-paced construction project, ADOT will rely on strong partnerships to keep the community informed, involved and engaged throughout the three-year construction process,” it continued. “Partnerships with neighborhood organizations, schools, community groups and the city will help this to be a successful project, meeting the community’s expectations while addressing the demands of traffic.” The Gila tribe contingent entered the meeting carrying several large signs condemning the freeway. Two members of the group, Linda Allen and Phil Morales, drew several loud rounds of applause in separate addresses to the committee. “The freeway is genocide for our people,” Allen said, nearly breaking down in tears as she told the committee how the freeway would trample sacred ground and vowed, “We are going to keep fighting it.” Morales told the audience that the tribe believed God lived in South Mountain and that the freeway was a desecration. “This is our sanctuary. This is our cathedral,” Morales said. “We’re going to lay down our lives in front of those damned bulldozers.” He then broke into a chant in his native tongue and shook a maraca as he and five other tribe members held hands and danced in a circle in front of the committee. When they finished, the audience cheered wildly and applauded.

Ahwatukee, which will divert truck traffic away from downtown Phoenix. Arguing on behalf of the Gila Tribe, attorney David Rosenbaum contended that ADOT’s impact study failed to consider alternative routes that would not harm the Indian community’s “continuum of life.” “The South Mountains continue to be a focus for tribal tradition and ceremony and contain petroglyph sites, shrines, trails, named places in traditional stories and traditional resources,” he explained. But Humetewa ruled that federal regulations do not require highway agencies to consider all alternatives to a freeway path and that ADOT had screened a number of alternatives posed by a citizens advisory group that included PARC members. “The court finds little support for plaintiffs’ arguments that the range of alternatives considered was insufficient due to a narrowly stated purpose and need,” she wrote. “Nor is the court persuaded that any other alleged deficiencies in the alternatives analysis asserted by the plaintiffs rise to the level of being arbitrary or capricious.” The judge also disagreed with the allegation that ADOT intentionally included reservation land in its study to minimize the impact of pollution on children. “The areas where the analyses were conducted are areas where both children and adults are located, including schools, day care centers, homes and businesses,” she said, saying she was satisfied the environmental study showed “the freeway project will not disproportionately affect children’s health.” “This court will not second-guess the agencies’ decision so long as there is adequate support in the record for that decision,” she wrote. In rejecting the GRIC arguments, the judge said alternatives to going through South Mountain would adversely affect other freeways and “would cause extensive residential and business displacements without addressing regional demand and current and project (highway) system deficiencies.”