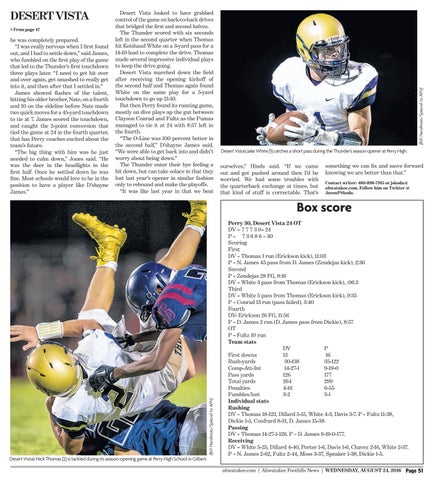 he was completely prepared. “I was really nervous when I first found out, and I had to settle down,” said James, who fumbled on the first play of the game that led to the Thunder’s first touchdown three plays later. “I need to get hit over and over again, get smashed to really get into it, and then after that I settled in.” James showed flashes of the talent, hitting his older brother, Nate, on a fourth and 10 on the sideline before Nate made two quick moves for a 45-yard touchdown to tie at 7. James scored the touchdown, and caught the 2-point conversion that tied the game at 24 in the fourth quarter, that has Perry coaches excited about the team’s future. “The big thing with him was he just needed to calm down,” Jones said. “He was the deer in the headlights in the first half. Once he settled down he was fine. Most schools would love to be in the position to have a player like D’shayne James.”

Desert Vista looked to have grabbed control of the game on back-to-back drives that bridged the first and second halves. The Thunder scored with six seconds left in the second quarter when Thomas hit Keishaud White on a 3-yard pass for a 14-10 lead to complete the drive. Thomas made several impressive individual plays to keep the drive going. Desert Vista marched down the field after receiving the opening kickoff of the second half and Thomas again found White on the same play for a 5-yard touchdown to go up 21-10. But then Perry found its running game, mostly on dive plays up the gut between Clayson Conrad and Fultz as the Pumas managed to tie it at 24 with 8:57 left in the fourth. “The O-Line was 100 percent better in the second half,” D’shayne James said. “We were able to get back into and didn’t worry about being down.” The Thunder enter their bye feeling a bit down, but can take solace in that they lost last year’s opener in similar fashion only to rebound and make the playoffs. “It was like last year in that we beat

ourselves,” Hinds said. “If we came out and got pushed around then I’d be worried. We had some troubles with the quarterback exchange at times, but that kind of stuff is correctable. That’s

Desert Vista’s Nick Thomas (2) is tackled during its season-opening game at Perry High School in Gilbert.